What Are You Doing For Thanksgiving?: Harmony Lu Harmony Lu is the pastry chef and mastermind of modernist desserts at Alexander’s Steakhouse Taipei, the newest location of the California-based, Michelin star-winning Alexander’s Steakhouse restaurant family. A former biogeochemist, Lu brings a firm grasp of science to the desserts she engineers in Taiwan. Popular Science spoke with the 25-year-old about her Thanksgiving plans, and some of the science behind them.

What are you eating and/or making for Thanksgiving?

People in Taiwan don’t really have a good idea of what Thanksgiving is. It’s a shame because it’s actually my favorite holiday, partly because it’s so American, but also because the motivation and traditions for Thanksgiving are my favorite things — simply getting together with people I love and sharing good food.

I made a dessert centered around pumpkin pie mousse. I wanted to break a pumpkin pie apart and add some interesting new elements. To make the mousse (the ball in the middle of the plate), I roasted and cooked the pumpkin, blended it in the food processor, and strained it. Then, instead of baking it as I would for pie, I cooked the pumpkin some more on the stove, folding in whipped cream and a bit of gelatin, which allowed me to get that spherical shape. I froze the mousse in silicon molds, and before serving I let them thaw to the right texture. 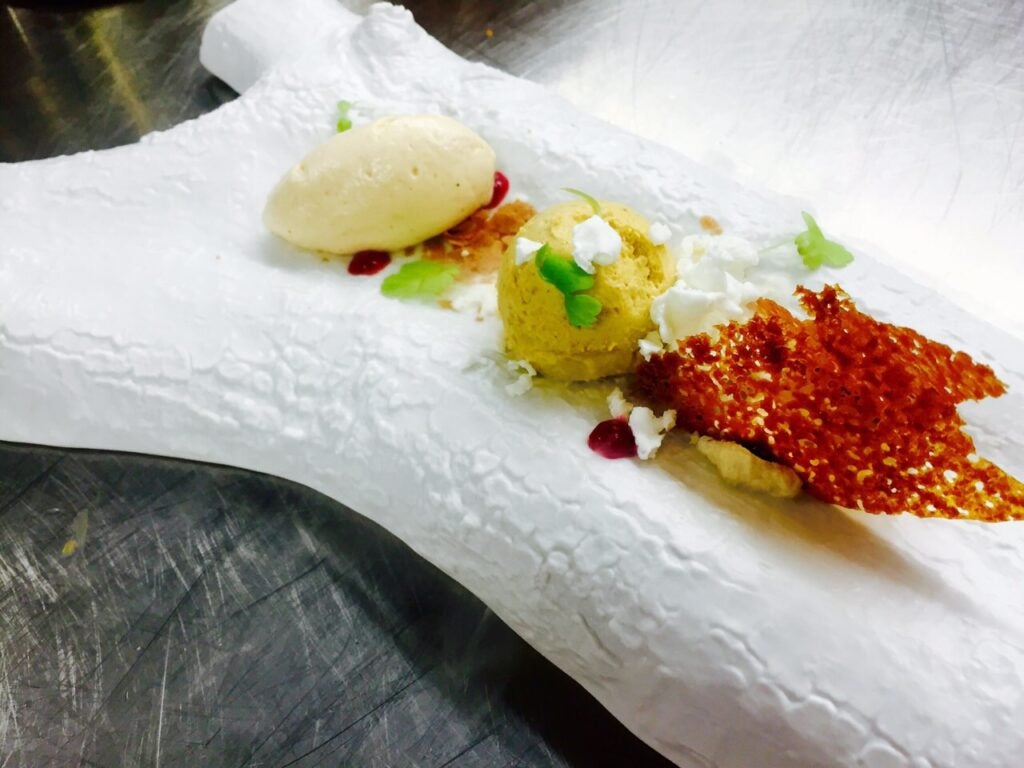 The torpedo-shaped thing to the left of the mousse is a quenelle of caramel chantilly, which is a sweetened whipped cream. The thin, crispy biscuit on the right is a caramel feuilletine tuile. Feuilletine breaks into crunchy wafer flakes, kind of like an awesome version of bran flakes, so I also scattered some around the plate to give the feeling of crunchy fall leaves.

The white crumbles are made from white chocolate milk foam frozen with liquid nitrogen. We’re taught to think that you add heat to food in order to cook it, but freezing food is also a version of cooking. So instead of hot chocolate, I made frozen chocolate. Before we serve the dessert to the guests, we’ll add some more liquid nitrogen so it arrives giving off vapor, almost as if it’s steaming hot. It’s still warm here in Taiwan, maybe around 70 or 75 degrees Fahrenheit, so I didn’t want to do a hot dessert, but I like to play with people’s expectations.

The green leaves scattered about are micro celery sprouts, and then I dotted the plate with cranberry sauce to give it some color. I thought I might need to gel the cranberries through a binding process called spherification. I often have to use spherification when I’m finishing a plate with other fruits, like berries, to prevent the gel from running all over the place.

It turned out that I didn’t have to use spherification because cranberries naturally have a high amount of a polysaccharide called pectin, which works as a thickening agent. That’s why making cranberry sauce at home is so easy — unlike other jams or jellies you don’t need to add anything other than a little sugar and acid. The pectin helps the sauce set properly and gives it the surface tension to stay put.

Pectin forms irreversible gels, so once you cook pectin and it sets, you can’t add heat and melt it back down into a thin liquid. The pumpkin pie mousse, on the other hand, is set with gelatin, which is from an animal protein called collagen. Gelling collagen is a reversible process, so if you heat the mousse up it will melt.

My goal with this dessert was to try to give some of my impressions of a traditional American fall. I brought Thanksgiving up at the restaurant, and took it on as my role to do something special for the holiday. Our customer base ranges from Taipei locals to people who have spent time in the US and maybe want to relive their American experiences. But I guess this dessert was as much for me as for anyone else.