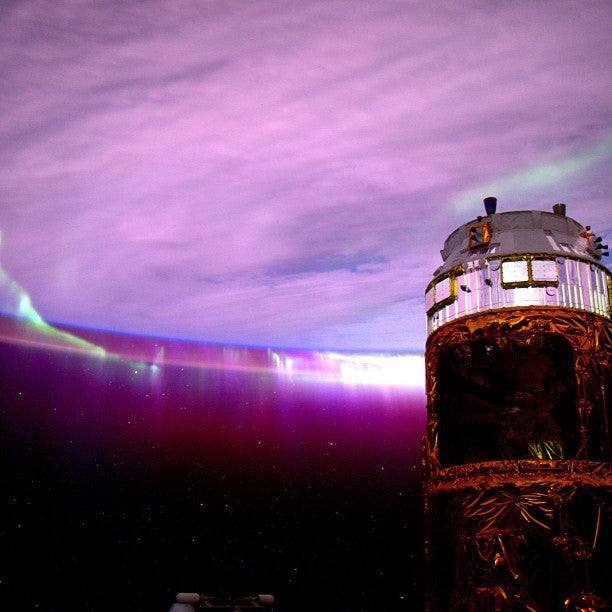 This is the Aurora Borealis as Scott Kelly sees it from the International Space Station. It’s breathtaking, inspiring–and perfect for Instagram.

That’s why Kelly posted it there. It was a huge hit, with over 19,300 likes at the time of this article. NASA has only been on Instagram since September 2013, but it has amassed over 4.6 million followers on its flagship account, in a little over two years. With images like the one above, it isn’t hard to see why.

Those 4.6 million Instagrammers may certainly be interested in space, but the real connection between them and NASA is the perspective of space in those pictures. They’re first-person, taken by the people who are actually seeing all of the wonders of the universe up close: the astronauts.

Astronauts’ social media posts are a big part of why NASA attracts so many followers. They’re the only human beings seeing the wonders of space firsthand.

Yet, astronauts aren’t being sent into space to rack up social media followers; they’ve got plenty to do on the space station or in orbit without snapping pictures “We don’t have any time scheduled in our day for social media, and our off time is actually very limited on the space station,” NASA astronaut Reid Weisman tells Popular Science. “We generally work about a 12-hour day.”

Participation in social media is entirely voluntary for astronauts. They may prep for a mission knowing very little about social media, but by and large they feel almost obligated to participate.

“I feel a responsibility to it,” admits Weisman, who knew nothing about Twitter before being prepped at NASA. “We sneak off and take a few pictures out the window of the Earth. I mean, you gotta share that. It’s so beautiful.” 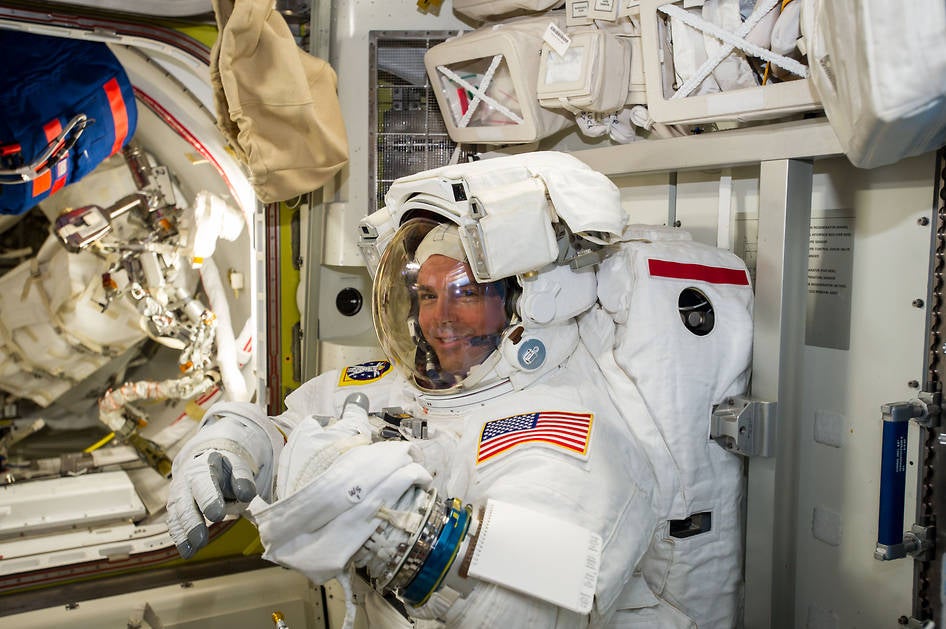 And how, exactly, do astronauts share those beautiful pictures of Earth? With the help of Social Media Specialists like Crag Bernard, who helped Reid’s Twitter feed earn over 382,000 followers.

“I brief them on the existing social media guidance,” Bernard says, “It’s suggestions more than requirements. There’s no distinction between social media and any other way we communicate with the public.”

The fun part is helping astronauts figuring out what to share, says Bernard. “When we first talked, [Weisman] was like, ‘I want to do things on the World Cup, #spotthestation, and looping videos,’” Bernard recalls. “From that, we decided on the [social] platform selection and the mechanics.”

There was also the consideration of what Weisman could offer that no other astronaut had at the time – which, given the launch of Vine, was looping video. “I was first drawn to the looping videos because I’d followed a ton of guys and girls who have gone into space, and the pictures were always amazing,” Weisman says. “But there wasn’t really a platform that just threw the video on a feed.”

Thankfully for Weisman, Vine had just come out when he was about to go into orbit, and it became the perfect platform for adding live looping video to his Twitter feed.

After clarifying a social media strategy, all the astronauts had to do was supply the content. “I would develop the content, attach a picture or Vine video [to an email], or tell [Craig] where to go to find the Vine video, and I’d downlink,“ says Weisman. “Then Craig would blast that out onto Twitter.”

That sounds simple, but sharing pictures or video from space isn’t as easy as logging onto the local Wi-Fi. On the ISS, the technical difficulties involved in using the internet increased exponentially, as Weisman discovered:

Thankfully, NASA figured out a solution. As Weisman recalls:

The whole process is collaborative, with a bit of back and forth to maximize the content’s reach on its given platform.

“A lot of times [astronauts] will reach out to me and want to brainstorm on things,” Bernard says. “That’s when I’ll look at current activities, hashtags, what’s trending, and offer suggestions back to them. The key, when [Weisman] sends me something, is to make sure it’s factually correct…I almost felt like Siri there, for a little while,” Bernard adds, chuckling.

After fact-checking and doing due diligence on anything the astronaut may have asked about, the astronaut’s content is posted live on social media.

The process doesn’t always run that smoothly, though. For one thing, even NASA has to fend off trolls.

“Anytime you post a picture there’s always a chance of someone saying ‘Hey! I see a UFO!’ or ‘I don’t think this is real!’ You’re always going to get that kind of thing,” Bernard says.

For another, astronauts don’t always get the platform they ask for. According to Jason Townsend, NASA’s social media manager and the person in charge of NASA’s organizational accounts, the choice of platforms is a “multi-factored” discussion. He rattles off a list of questions that he and his colleagues ask when helping astronauts post to social media: “Do we have the capacity for that? Is it bringing a new audience, or a new way of displaying content? Do we have somebody we could reach on there that we couldn’t reach elsewhere?”

Townsend and his two-person team are responsible for answering all of those questions, building relationships with all the platforms, and – yes – deciding if and how NASA will use them. It’s a big job, and it all boils down to one big goal: relevance. “We do things all the time to try to make NASA relevant,” says John Yembrick, another social media manager behind NASA’s flagship accounts. “Inject NASA where it makes sense. If something’s trending – like Leonard Nimoy’s passing, or National Doughnut Day, or that One Direction video – and if it makes sense for us to be there, we will be.”

Lastly, social media has a bit of a learning curve, even for NASA. “There was a test firing of a rocket engine,” says Yembrick, “we did an 8-minute video and it bombed online. We pulled out a 45-second bit for social and it did great.”

“Social media is really eye-opening,” adds Townsend. “When [we] started, it was a great learning tool. Retweeting taught us how to recompose tweets.” “Every day you learn something new,” admits Yembrick. “Framing content and seeing how people respond to it-–sharing with friends and followers-–is one of my favorite parts [of the job].” 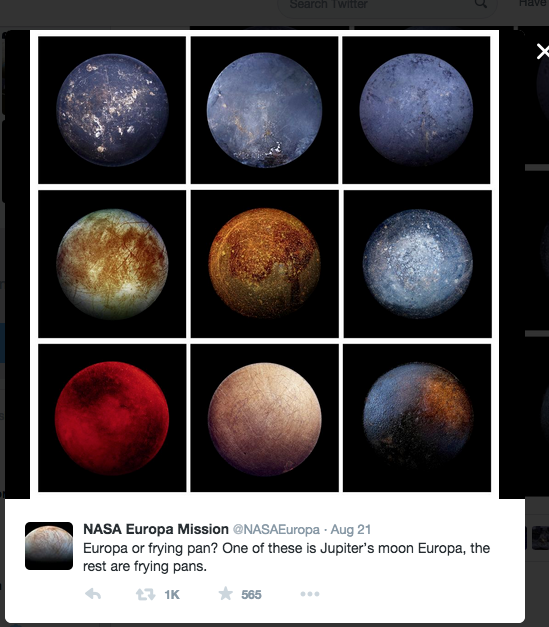 NASA has a wealth of content from which to build their social media pages.

NASA has a wealth of content from which to build a social media platform, from astronaut’s social media feeds to image galleries, TV stations, and patents. NASA rightfully sees all of that content as a goldmine, and is doing everything it can to share it. Social media gives them an effective way to do so, and allows them to do what they do best: inspire.

“Imagine if Neil Armstrong and Buzz Aldrin had had social media when they were on the moon,” says Weisman. “It would be a totally different experience for everybody.”

That push to inspire has been a core part of NASA’s strategy ever since it started using social media in 2009. After Mike Massamino’s first tweet from space that year, NASA has since held regular social media events, fittingly called, “Socials,” in which the agency has invited over 6,500 social media followers behind the scenes of launches.

At these events, followers are allowed to see launches up close and share them with their own friends online in real time, with “no conditions on what they can say, other than stuff that’s off-limits for security reasons,” says Worley.

With 10 communication centers distributing content across 13 platforms, NASA’s doing everything it can to both support and embrace its increasingly loyal followers. And the strategy seems to be paying off: NASA has embraced social media like the best major brands do. Certainly more than any other government agency.

It’s a marked contrast to NASA’s communication style with the public during the beginnings of the space program. According to Yembrick, who worked in space operations at NASA prior to social media, it all comes down to one major difference: access. “NASA’s always been doing amazing things,” he says, “but the public didn’t know it was happening.”

Back at the beginning of the space program, the public primarily learned about NASA via the major news media. There were dedicated reporters who covered launch-related events and other space news. These reporters had access to all of NASA’s information, and as such that’s whom NASA geared their information towards.

In order for the general public to learn more, they had to dig the information up themselves, and only the die-hard space geeks did that. But now, public information is much more accessible. “Our job as communication specialists is to not just share, but put the information in plain English,” says Yembrick. “We don’t need to create these big news products. We need to create social friendly content. People aren’t just observers. Nowadays, people can participate with NASA.”

And participate they do.

“During the government shutdown [in 2013], for 17 days, we were all furloughed,” recalls Yembrick. “We couldn’t do anything, even though we wanted to!”

During that time, Yembrick says, the community stepped up and shared tweets using the hashtag, #thingsNASAmighttweet. They went from being armchair observers who knew what the astronauts would do and cover to actually being the ones that got that information out to the media.

NASA’s social media followers will even take down the trolls for them: “You’ll see the social media community kind of take on those battles for you,” Bernard says.

But perhaps the strongest testament to NASA sharing its content so freely is how inspired they feel because of their followers.

“I put a picture of this atoll on the Pacific Ocean,” shares Weisman, “and one guy wrote back: “Dude! I was born there!” I’ve actually struck up a relationship with this guy, and I would love to go see his little atoll in the Pacific. I mean, it is 1,000 miles from absolutely any other landmass and I didn’t know any other human beings lived there, and here we are on Twitter and this guy responds that he lived there.”

“I was in Addis Ababba, Ethiopia, which is 180 degrees different than what you and I know here in the US,” shares Worley. “These kids barely have shoes on their feet. But, it was incredible how inspired they are by the space program. They know about the Curiosity Rover! There was a 14-year-old kid who built a robot out of LEGOs to help aid workers in case Ebola came to his country. I mean, how can you NOT be inspired by that?!”

With all this inspiration, what’s the next step for NASA on social? “Oh I don’t even think I can answer that question,” admits Weisman, but he sees the potential for platforms like Yahoo’s new messaging service and Periscope that offer instantaneous live-video feeds. “If a user wants to go in and see what’s going on through my perspective in space… to me, that would be the end game, where they could absolutely come along for the experience if they wanted to.”

Giving the average Joe a front seat to the wonders of the universe? It’s one small step for NASA, one giant leap for mankind.