What Are You Doing For Thanksgiving?: Dave Arnold 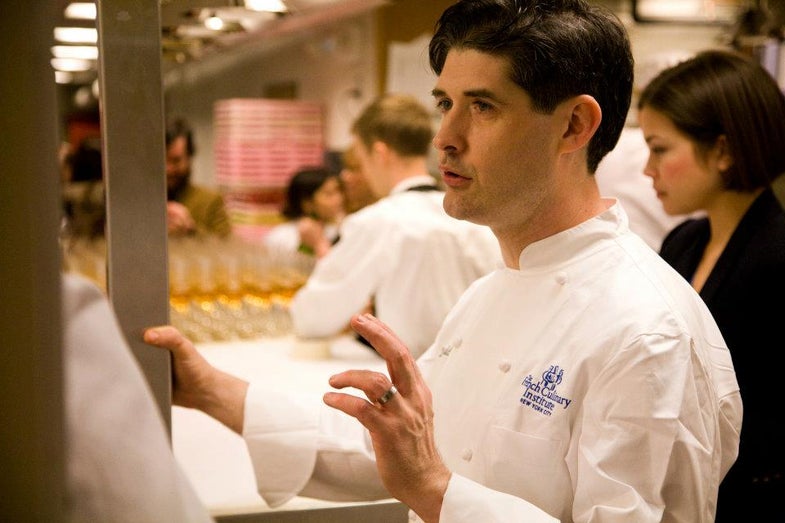 Dave Arnold is a food innovator, writer, and host of the radio show Cooking Issues. Arnold is the founder and president of the Museum of Food and Drink and the brains behind Booker and Dax, a food and drink research lab in New York City. He is also the author of Liquid Intelligence: The Art & Science of the Perfect Cocktail. Popular Science spoke with him about his Thanksgiving plans for this year.

I’m cooking two heritage turkeys. One is 10 pounds and one is 18 pounds. The only difference in the way I cook them will be the way they’re finished. I do all my cooking the day before Thanksgiving, and then I can do the finishing in several minutes. This frees up my oven for when people invariably come over and say, “I need to throw my x, y, and z in the oven” and you’re like, “Really? I have a turkey in there.”

So this year I’m cutting the bird down the backside and ripping out the rib cage, collar bones, and whatnot. I’ll rip the thighs and legs off with the meat and bones, but I’ll leave the skin still attached to the breast meat. I’ll salt and herb the thighs and legs and confit them for three and a half hours at 85 degrees Celsius.

I’ll also salt and herb the breast, which has the skin of the entire turkey attached to it. I’ll cook it in a vacuum-sealed or zip-lock bag in a water bath at 64 degrees Celsius for about an hour and a half. The breast meat won’t need to cook for too long because it will be boneless and flat. Then I’ll shove the confit thighs and legs into the skin from whence they came, and reassemble the entire bird like it’s whole again.

I’m going to deep-fry one of the birds — that one I’m not going to put stuffing in because it would absorb a lot of grease. I’ll finish the other bird in my tandoor oven, suspended on skewers so the turkey is cooked from all directions. The tandoor oven will cook the outside of the turkey in super high heat, so I’ll want stuffing within the turkey to help cook the insides.

What are some other methods you’ve tried for cooking turkey?

Everything I do is in service of cooking the turkey well while trying to maintain the American tradition of having a turkey that at least externally looks like a whole bird.

If you cook the turkey whole, you run into problems because the breast meat wants to cook at a lower temperature than the thigh and leg meat. People try different techniques to solve this problem, like shielding the breast meat, or only brining the breast meat so it has a longer window to stay juicy.

Last year, I cut the raw bird down the backside and removed the rib cage, collar bones, and thigh bones. Removing the thigh bones helps you address the problem of having persistent pink action near the ball socket where the thigh meets the bird. I roasted the bones and made a stock so I didn’t have to use alternative stock or only use drippings for the gravy.

Then, instead of brining the breast meat I injected it with its own stock. This addresses the two main complaints from anti-brine people. One complaint is that when you’re wet-brining a turkey, you’re just making the turkey watery. The other is that you end up with drippings that are unpalatably salty.

After brining the turkey, I made stuffing with bread, mushrooms, mandarin orange, sage-y breakfast sausage, celery, onions, eggs, herbs, salt, loads of butter… and that crappy ‘70s style poultry seasoning. To me, the stuffing just doesn’t taste right without poultry seasoning. This is the one time each year I bust it out.

I sculpted the stuffing in the shape of the turkey cavity using pictures I took of the carcass. Then I heated the stuffing in a zip-lock bag with a sous-vide water circulator until the stuffing was nice and hot. I put the raw bird over the hot stuffing so it started cooking the bird from the inside out, and then threw the whole thing in a hot oven.

Because the bird had no bones, and it was being cooked from both inside and outside, the whole thing was done in just a little over an hour. Taking the skeleton out of the turkey also means it is a freaking dream to carve.

What would you say is the most successful method you’ve tried?

From a technical standpoint, the most successful turkey I’ve made is the bionic turkey, which I’ve made four or five times. That involves pumping hot oil into the turkey legs through fake aluminum bones.

To make the bionic turkey, I removed the bird’s entire carcass by turning the meat inside out, almost like how you’d take a glove off. I ran the knife around the thighs and legs to take the bones out, but I never cut the skin on the back or breast. The wing bones are the only bones left in the bird, because there’s not much you can do with them anyway.

I took aluminum tubing that’s roughly the same size as the thigh and leg bones, and joined them with flexible high-heat tubing. I cut holes in the metal tubes, kind of like the ones in a sprinkler. Then I pushed these fake bones into the thigh and leg meat.

The sprinklers delivered a hot mixture of butter and duck fat into the legs, which is usually where you get the most redness. Years ago I ran a test where I cooked the turkey at different low temperatures. I learned that the longer it takes you to cook the meat, the more persistent pinkness you get. Pumping hot oil into the turkey legs cooks them really quickly, so you solve that problem.

The hot fat surged through the turkey legs and then poured out of the turkey’s butt into a lower-temperature, circulating oil bath. After pumping oil into the turkey legs for about half an hour, I immersed the entire bird into the circulating bath. I jammed herbs and some wadded-up aluminum foil into the bird, leaving a decent amount of open space, to heat up the inside of the bird.

With no bones, all that meat cooked in under two hours. I pulled the parts out of their baths, let everything cool down, and carefully extracted the aluminum foil and aluminum bones. So I had a completely hollow turkey shell that was perfectly cooked.

To finish, you can deep fry or oven roast the whole bird in high heat. You could also heat stuffing up to 200 degrees Fahrenheit, and shove the piping hot stuffing into the turkey with thick cooking gloves. Then let the bird come to room temperature as it’s heating from the inside out, and flash heat the entire thing.