Just the sound of a dentist’s drill is enough to send most people into a panic. Add to that the... 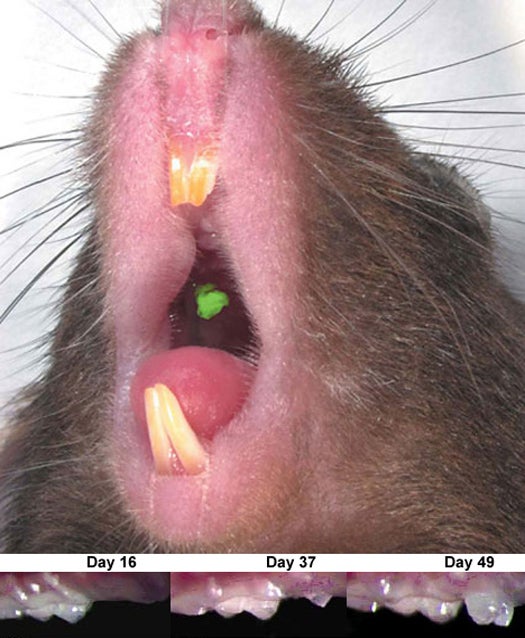 Just the sound of a dentist’s drill is enough to send most people into a panic. Add to that the awful inconvenience of walking around for a day with half your face numb, and it’s easy to see why getting a cavity filled or a tooth replaced is one of life’s most annoying chores. Fortunately, some new research may make the common drill-and-fill a thing of the past.

A mouse in Japan has successfully regrown a lost molar from a genetically engineered tooth seed. Essentially composed of tooth stem cells, the seed grew into a fully functional tooth after only about a month and a half. The new tooth works far better than an inorganic implant, because it contains the same nerves and vascular connections as a natural tooth. As seen in the picture above, it has the additional optional feature of glowing green under ultraviolet light.

The scientists created the seed by placing a mixture of multipotent cells, a less variable type of undifferentiated stem cell, into an organ culture for a week. Once the ball of cells began to differentiate, the scientists surgically implanted the cell seed directly into a hole in the mouse’s jaw. After that, the tooth was on its way.

With the technique perfected, its easy to imagine the dentist forgoing the drill and simply smearing a tooth stem cell concoction over a cavity, letting the tooth regrow itself. As someone who takes frequent and problematic trips to the dentist, I look forward to the day when the most painful part of a trip to the dentist is reading five-month-old issues of Us Weekly in the waiting room.