The End Of Root Canals?

Stem cell-stimulating fillings could change dentistry and save your teeth 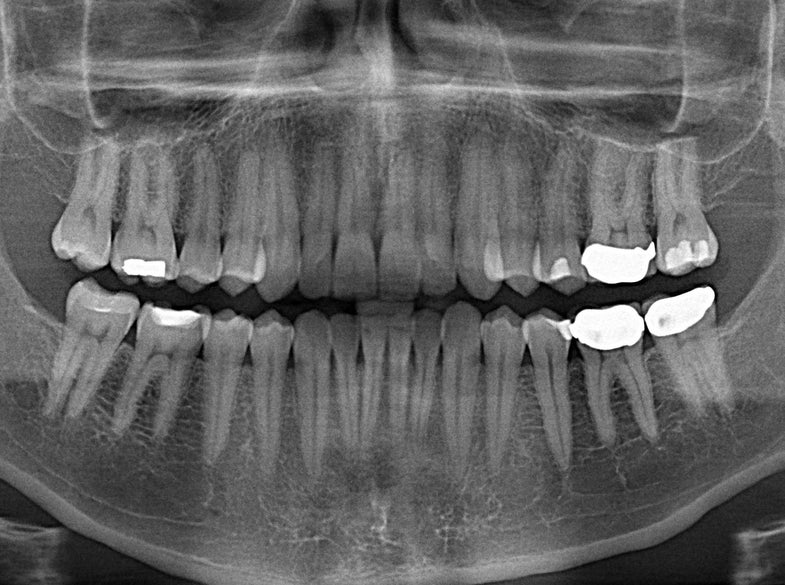 Visited the dentist today. Here was my x-ray. This was the first time I used this machine that I put my head into and it rotated around my head.
SHARE

What if damaged teeth could heal themselves? That’s the inspiration behind a new project from Harvard and the University of Nottingham to create stem cell stimulating fillings.

Dentists treat hundreds of millions of cavities each year by drilling out the decay and putting in a filling.

But 10 to 15 percent of those fillings fail, says Adam Celiz, a therapeutic biomaterials researcher from University of Nottingham. And that leads to millions of root canals to remove the tooth’s pulp, the soft tissue in the center of the tooth that contains the blood vessels, nerves, and connective tissue. A root canal can weaken the tooth, which may eventually need to be pulled.

Celiz and his fellow researchers have developed a new kind of filling made from synthetic biomaterial that can stimulate the growth of stem cells in the pulp of the tooth. Just like regular fillings, the biomaterial is injected into the tooth and hardened with UV light.

In in vitro testing, the fillings stimulated the proliferation and differentiation of stem cells into dentin, the bony tissue that forms the bulk of the tooth under the white enamel. The researchers believes that if used in a damaged tooth, those stem cells can repair the kind of damage that often comes from the installation of a filling. In essence, the biomaterial filling would allow the tooth to heal itself.

In the future, Celiz says, all fillings could be made of such regenerative material so that damaged teeth could heal themselves, lowering the failure rate of fillings, and potentially even eliminating the need for most root canals.

The team took second prize in the materials category of the Royal Society of Chemistry’s Emerging Technologies Competition this year.