A new tooth-regenerating paste could reverse bacterial-induced tooth decay, sweeping dental drills into the dustbin of history. Hopefully. As your... 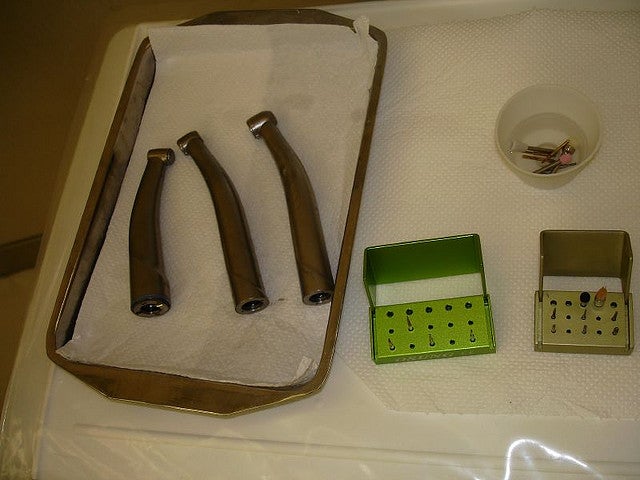 As your hygienist probably told you, tooth decay happens when bacteria in plaque dissolve your enamel, creating cavities. Eventually the cavity gets big enough that your dentist has to take out the decay and drill a hole that can be filled with resin, gold or something else. But a new treatment developed at the University of Leeds in the UK reverses the decay, allowing your teeth to rebuild themselves.

Researchers led by Jennifer Kirkham at the Leeds Dental Institute developed an amino acid toothpaste that contains a compound that assembles into fibers. When it’s applied to a decayed tooth, this peptide paste forms a gelatinous scaffold that attracts calcium, enabling the tooth to rebuild itself from within. Tissue and bone scaffolds are used to seed new organs and new bones — why not teeth?

This procedure also avoids the use of stem cells, which also hold great promise for regenerating teeth. One such treatment also uses a scaffold, but instead of inducing calcium building blocks, it seeds the scaffold with stem cells. Just last month, we heard about a different project to re-grow mice molars in vitro and transplant them back into the mice. But a stem-cell-free toothpaste that grows new teeth in situ would conceivably be less painful, not to mention less controversial.

The team has already tested this in humans, according to a Leeds news release. A small group of patients with the early signs of tooth decay received a treatment with the peptide solution, known as P 11-4, and results suggest the damage was reversed, the release says.

A dentist would still have to clean out the decay, so it’s not clear that the dental drill will be entirely eliminated with this new toothpaste. But it’s a step toward making dental visits a lot more pleasant.