Scientists have created cultured teeth, seeding them like pearls in the intestines of rats. Progress with stem cells and tissue engineering promises to bring this tech to dentistry. 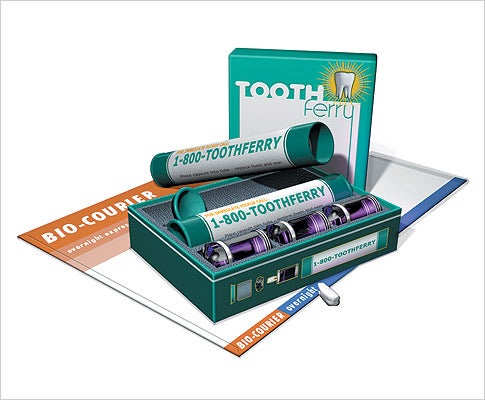 When your child’s baby tooth falls out, pop it into a special capsule and transport tube–the Tooth Ferry–and send it off to the lab, where technicians will isolate stem cells from the tooth pulp, culture them, and store the sample. Each sealable capsule holds a growth medium to nourish the stem cells until they make it to the lab.

“They’re drosophila with a backbone,” Pamela Yelick says as she shows me the tanks full of zebra fish in her lab. Translation: The critters are easy to work with, and scientists have cracked their genome, making them almost as good as fruit flies when it comes to doing genetic research. But for Yelick, a molecular biologist at the Forsyth Institute in Boston, one crucial trait makes them even better than fruit flies: Zebra fish have teeth. And not only that, they continuously shed and regrow those teeth over the course of their lifetime.

Today, more than 200 million people in the United States, Europe and Japan are missing at least one tooth, and in the U.S. alone, some 200,000 implant procedures are performed annually. But even state-of-the-art prosthetics are a poor substitute for authentic pearly whites: The titanium structure is often rejected by the surrounding tissues. Moreover, implants are rigid and can’t adapt as a person’s bite changes over time. “When implants go wrong, it’s just a mess,” says Yelick. “Dentists are thrilled that there will be an alternative.” That alternative is being developed in a lab two floors above Yelick’s fish tanks–the lab where her team is growing teeth.

In 2002, Yelick’s team surprised themselves and the research community by producing their first cultured tooth. It was, granted, a small tooth, measuring just 0.08 inches in diameter, but it was a major breakthrough. Previous efforts at other labs had generated dentin, the bone-like tooth material, from dentin stem cells. Yelick’s tooth, grown from tooth buds taken from a six-month-old pig, had an enamel layer over a dentin core, and other recognizable structural elements.

Here’s how it works: First, researchers “dissociate,” or divide, the buds–a bit of immature tooth tissue–into individual cells. Then they seed the cells onto a scaffold: a polymer felt, shaped like a tooth and then coated in collagen. The scaffolds are implanted in the intestine of a rat, where they have a steady blood supply, and left for 20 to 30 weeks.

Two big hurdles to a human application remain: how to isolate enamel stem cells, and how to coax growing buds into a specific size and shape. Yelick’s team has made significant progress on the first challenge, research that she hopes to publish by the end of this year.

Understanding how and why, say, a molar becomes a molar and not an incisor is a harder question, and that’s where the zebra fish come in. Yelick is studying the gene-signaling pathways of the fish, trying to understand the molecular mechanisms regulating craniofacial development. Her lab has already identified a novel receptor expressed in the tooth development of both zebra fish and humans.

Once the second milestone has been reached–in the next three to five years, Yelick predicts–the team will begin testing on larger animal models, and ultimately humans. “We already have people calling us now asking for pigs’ teeth,” she says. “But we won’t actually have a clinical product for 10 to 15 years.” In fact, though, the technology has already been licensed by Ivoclar Vivadent, a Liechtenstein-based company commercializing several advanced chemical and biological dental therapies. The company hopes to be growing John Q.’s teeth from his own cells by the end of the decade.

Other Developments in Regenerative Dentistry
The Vaccine
Two researchers at the Forsyth Institute are pioneering the development of a children’s vaccine that would prevent cavities by stimulating the production of antibodies against mutans streptococci, the bacteria that cause tooth decay.

The Chewing Gum
7Scientists at Paffenbarger Research Center are developing remineralizing chewing gum (as well as toothpastes and rinses) that will help teeth repair themselves.