Football players at the University of North Carolina are changing up their diet regimens to include vitamin-sized pills containing batteries,... 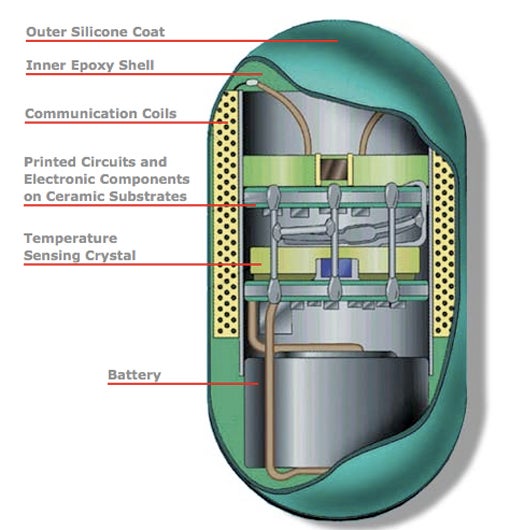 Football players at the University of North Carolina are changing up their diet regimens to include vitamin-sized pills containing batteries, thermometers, and radio transmitters. The CorTemp capsule that 18 Tarheel players took this week are a key element of a study that hopes to determine the long-suspected link between body temperature and concussions. But the pill is also a boon to coaches and trainers, who can keep an eye on players’ body temperatures when they are drilling in heat that often reaches the high 90s.

Symptoms of concussions often overlap with symptoms of heat exhaustion or heat stroke, so when a player comes to a trainer complaining of dizziness, nauseau, blurred vision, or headaches, it’s difficult to diagnose the problem. To compound the issue, a theory has long posited that dehydration—a leading cause of heat exhaustion and heat stroke—increases the likelihood of concussion. Put all that together, and diagnosing a sweating, beat-up lineman complaining of dizziness is enough to give a trainer headaches.

The CorTemp capsule could change that. The silicone-coated pill is swallowed about five hours before physical activity begins. It takes residency in the intestines, where it keeps constant tabs on its host’s core temp for one to two days, before passing naturally. In conjunction with an ongoing UNC study in which helmet-mounted sensors measure the G-forces created by hits on the field, researchers hope to crack the heat-concussion conundrum. By cross referencing body temperature data with where, and how hard, a player is hit, researchers should be able to either establish a link between heat and concussion or put the theory to rest for good.

In the meantime, medical personnel have instant access to core body temp, so symptoms like dizziness and nausea are easier to diagnose as either heat exhaustion or a more serious head injury. For the coaches, the data can be gathered in real time—a wand waved within six inches of a player instantly captures core temperature—and can be used to adjust the duration and intensity of drills, helping them push their players to the limit without crossing into physically dangerous territory. Further, they can tailor regimens for individual players. A heavy-set defensive lineman will respond to tough drills on a hot day differently than a lithe wide receiver. CorTemp makes those differences apparent in real time.

At $40 a pop, the pills are still too pricey for everyday use in monitoring players’ core temperatures, but the data CorTemp provides creates an important educational tool for coaches and trainers. In the past two seasons, 10 players have died from brain-related injuries, all in high school and all perhaps preventable. If researchers can establish a threshold above which the likelihood of concussion becomes greater, coaches can better gauge when to pull a player from a game, or how to keep practice drills safe. To that end, the UNC players will pop pills once more during training camp and during two games this season.