What a week for stem cell-related surgeries. Not seven days ago surgeons in Europe announced the successful transplantation of the... 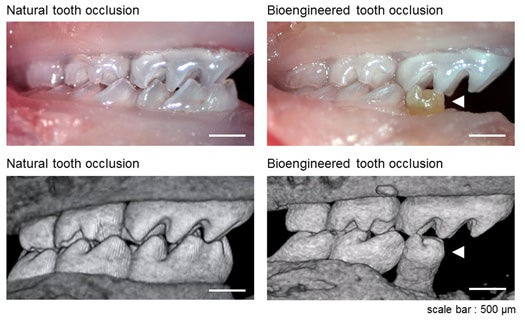 What a week for stem cell-related surgeries. Not seven days ago surgeons in Europe announced the successful transplantation of the world’s first lab-grown organ–a trachea–grown from a patient’s own stem cells, and now Japanese researchers are saying they’ve grown and successfully transplanted new stem-cell derived teeth in mice.

Alright, so the mouse news may be somewhat dwarfed by the human trachea, but it’s no less groundbreaking from a “future of medicine” standpoint. In both cases, scientists extracted cells from the body, grew body parts outside of the body, and then put those body parts into the body. And the bodies, for their part, seem unbothered by the switch.

As with the trachea, the Japanese researchers extracted stem cells from the mice–in this case, from their molars–and placed them in a mold designed especially for growing teeth. Once they had developed into full teeth, the researchers swapped them into the jaws of the mice from which the cells had come. Within a little more than a month, the teeth had fused to the jaw, nerve fibers were growing into the new teeth, and the mice were again gnawing with no apparent problems–though to be fair the replacement tooth wasn’t an exact facsimile of the one it replaced, as you can see above.

Taken on its own, either one of these developments (or others like it) is amazing, but the fact that these stem cell-derived transplants are beginning to happen more frequently–albeit still in an experimental context–is huge for the field of regenerative medicine. Each of these procedures takes us a step closer to a future where donor organs are a thing of the past, and replacement parts are regularly manufactured in the lab from the patient’s own biological stuff.