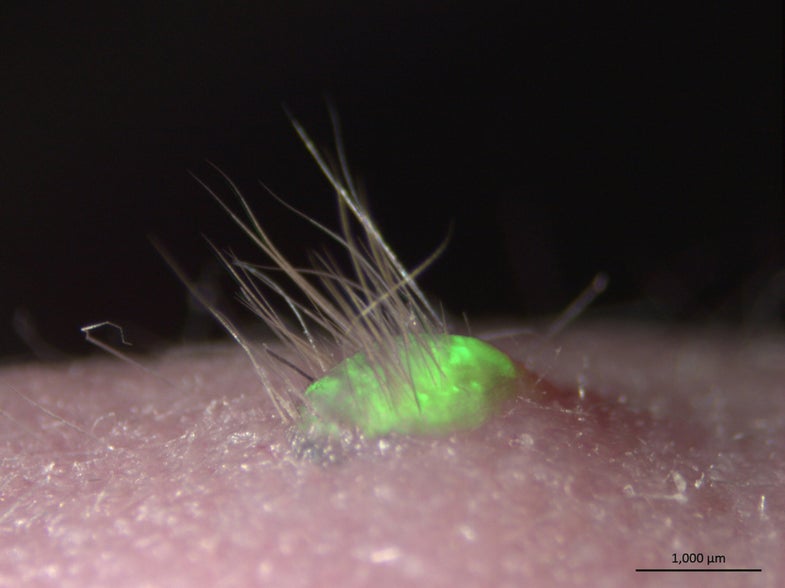 When someone suffers a bad burn, scientists would like to be able to grow skin in the lab to patch it up. However, so far, skin grown in this way is a simplified version of normal skin, lacking the layers and glands that make skin function properly.

Now a team of researchers in Japan has grown a fully functioning skin from the stem cells of adult mice. Like regular skin, the bioengineered tissue has three layers—the epidermis, dermis, and subcutaneous fat. It can also grow hair and has sebaceous glands that secrete oils that keep skin healthy. The team thinks the skin could eventually improve regenerative therapies for burn victims and people with skin diseases, and it might even provide a cruelty-free way to test cosmetics.

To make it work, the scientists took cells from mouse gums and transformed them into induced pluripotent stem cells—undifferentiated cells that can change into any type of cell in the body. But instead of using those lone cells to try to grow skin, they let the cells grow into embryoid bodies—3D clumps of cells similar to what would form in a developing embryo.

When the clumps were implanted into immunodeficient mice, they differentiated into the complex, bioengineered skin. The researchers then transplanted pieces of it onto “nude” mice, where it integrated with the surrounding tissue, including nerves and hair follicle muscles, without immune rejection.

It will still likely be at least a few years before the technique will be able to help humans with skin problems, though. The researchers will likely want to do more research on mouse cells before moving the technique into human trials. But lead author Takashi Tsuji from Japan’s RIKEN Center for Developmental Biology is hopeful. He said in a press statement, “We are coming ever closer to the dream of being able to recreate actual organs in the lab for transplantation, and also believe that tissue grown through this method could be used as an alternative to animal testing of chemicals.”