Chemotherapy is notorious for the toll it takes on the entire body. It kills cancer cells, sure, but it kills... 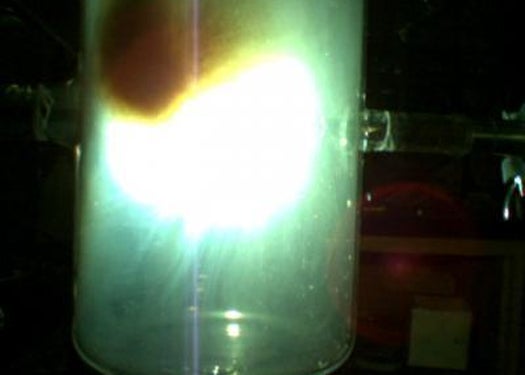 Chemotherapy is notorious for the toll it takes on the entire body. It kills cancer cells, sure, but it kills a lot of healthy cells, too. But soon a new advance in carbon chemistry may replace the shotgun blast of chemo with a radiation sniper shot.

Scientists at Virginia Commonwealth University have devised a technique for placing radioactive molecules inside the soccer-ball-shaped molecules known as buckyballs. Thanks to new advances in cancer targeting, the buckyballs might be able to deliver the radioactive particles to specific cancer cells. This method would provide a targeted chemotherapy that would avoid the painful and prolonged side effects caused by today’s full-body radiation treatments.

To make the buckyballs, the scientists zapped carbon rods with plasma until the the rods were reduced to ash. The scientists then took the ash and passed it through a radioactive solution. After purification, the resultant mixture contains radioactive buckyballs, and will dissolve in a biofluid.

The researchers are optimistic that this technique will produce applications well beyond cancer treatment. Targeted radioactive buckyballs could also be used to create super-accurate MRIs and new diagnostic techniques for a range of diseases.

[via The Future of Things]