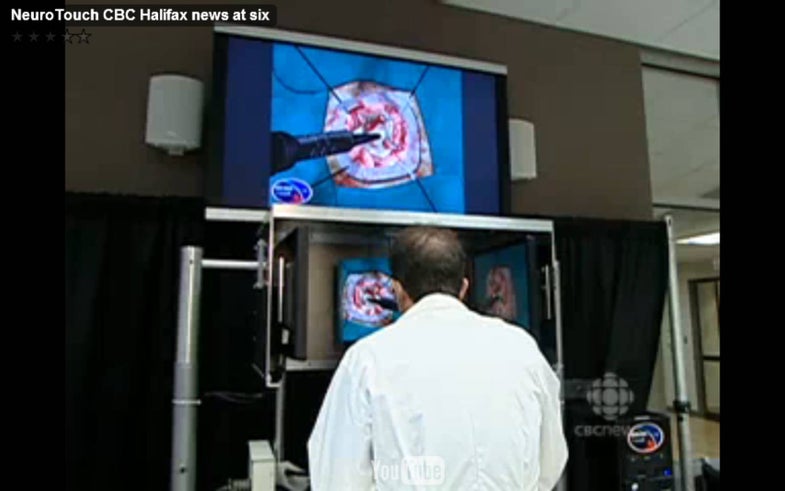 This simulator goes far beyond the olden days of the board game “Operation.” Last month, for the first time, neurosurgeons rehearsed on a 3-D model of a patient’s brain just hours before removing a brain tumor for real.

The simulator takes advantage of fMRI brain scans to create a high-resolution model of the patient’s brain. Neurosurgeons can then flex their skills by manipulating tumors or other virtual objects on screens. They even use an instrument resembling a scalpel that creates force-feedback resembling that of the real tool, and simulates the tissue resistances in different parts of the brain. How’s that for a Wii-style device, Nintendo?

The crowning moment for the “Neurotouch” simulator came late last month. Surgeons in Halifax, Nova Scotia practiced a brain tumor removal procedure, and then carried out a successful five-hour operation on a 48-year-old woman with a benign tumor near her brain’s speech center.

Canada’s National Research Council started the $9.1 million, three-year project in April 2008, and hopes to improve on the current prototype that only simulates tumors close to the brain’s surface. A final simulator may also allow doctors to work with both hands, as opposed to just one hand.

Surgeons have not hesitated to test out new technologies ranging from robotic hands to even training on video games. We can’t wait to see how the artificial “Blue Brain” project can further revamp the future of medicine.

For more on NeuroTouch, check out the CBC report in the following video.