A giant moonbeam reflector may shine away depression. 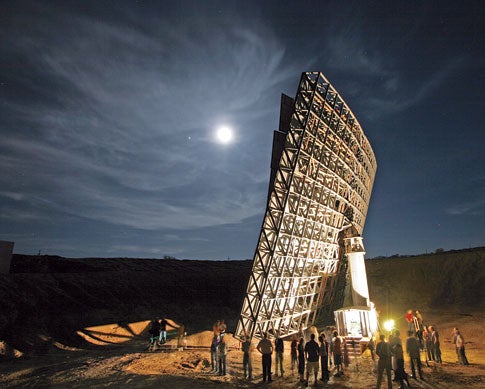 In Arizona´s Sonoran Desert,15 miles west of Tucson, the depressed and ailing come to bathe in the gentle blue-white beam of Richard Chapin´s 50-foot-tall moonlight collector.

Chapin, the founder of a lucrative Arizona swap meet, has spent the past four years and $2 million of his personal fortune building the world´s first and only therapeutic moonbeam catcher, a 30-ton array of mirrors called the Interstellar Light Collector. Although he has no medical training, Chapin is convinced that his invention can help people conquer depression, arthritis and even some types of cancer.

He has only anecdotal evidence to back his claims, however, so he´s invited scientists nationwide to put his device to the test. Biologists at the University of Arizona have expressed interest in using the collector to study moonlight´s effects on plant growth cycles but not yet on people. If nothing else, the collector offers a unique research opportunity. Although moonlight is reflected sunlight, its frequency and spectrum are unique and, so far, irreplicable, which makes it difficult to examine in a controlled, clinical fashion. â€It´s a hot area to understand the spectral effects of light on human health and physiology,â€ says Michael Gorman, a University of California at San Diego biopsychologist who has studied how hamsters react to light.

Chapin-who spends many a late night, especially during a full moon, tinkering with his reflector-plans this year to test moonbeams´ effects on animals with cancer. But already a few human volunteers have subjected themselves to Chapin´s moonlight. One woman claims the session eliminated her need for eyeglasses; another volunteer says it cleared up her rash. Chapin contends that, hogwash or not, the results at least merit follow-up research: â€That´s why we´re getting started.â€