Researchers are zeroing in on a long-sought goal of human healing: organs that can regenerate themselves from within 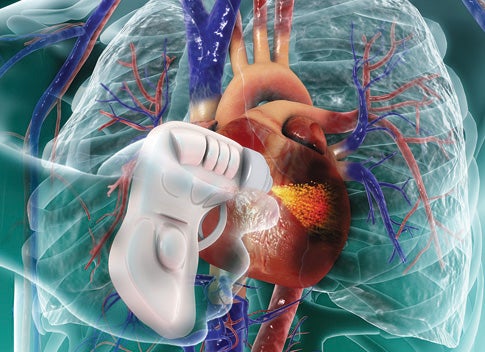 The protein-based drug molecules penetrate heart-muscle cells and suppress production of an enzyme called p38 that ordinarily limits tissue growth. With p38 turned off, mature heart-muscle cells de-differentiate, which allows them to multiply rapidly and mature into new heart muscle.

Although doctors may someday heal weakened body parts by infusing them with stem cells that develop into specialized tissues, coaxing the body´s own cells to become self-repairing would be an even bigger biological coup. What if we could simply prompt damaged organs to repair themselves?

Glenn Larsen, the chief scientific officer at Hydra Biosciences in Boston, has been chasing this regenerative dream for the past four years. With help from a team of Harvard University researchers, Larsen and his colleagues are developing protein-based drugs that encourage the regrowth of muscle tissue that has died after a heart attack.

â€The heart is constantly secreting chemical factors it needs to maintain itself,â€ Larsen explains. â€All we´re doing is trying to enhance that.â€ Fair enough, but his company is likely to be the first to take the revolutionary step of harnessing these natural processes to grow new tissue where and when it is needed. With restored heart-muscle function, patients would be able to resume swimming, running or just gardening much sooner. They would also be less prone to congestive heart failure, which kills more than 50,000 Americans every year.

The strategy Larsen envisions is simple, though groundbreaking. Patients will use a self-delivery device, such as an inhaler or supersonic drug gun, to propel the regenerative protein molecules into their bloodstream. The circulating molecules will bind to receptors on the surfaces of their damaged heart-muscle cells, touching off a chemical reaction that mutes the activity of genes inhibiting cell division. Once this biological switch has been thrown, new heart cells will begin to develop, filling in the dead-tissue gaps. The result: Within a few weeks, heart-muscle function will be permanently restored.

Human trials of Hydra´s cardiac drugs won´t begin for another few years, but experimental evidence already points to the treatment´s potential. Last year, Hydra researchers induced heart attacks in rats, then dosed them with CRF-1, one of the protein compounds under investigation, for 10 days. A month after their heart attacks, the rats receiving treatment demonstrated heart-muscle function that was about 20 percent better than that of the control group.

â€Can we get regeneration to work? The answer is yes,â€ says Mark Keating, a Hydra co-founder and the head of human genetics at the Novartis Institutes for Biomedical Research in Cambridge, Massachusetts. â€By releasing the genetic brakes, so to speak, it´s possible to get different types of cells to proliferate.â€

Hype That Breaks Your Heart

Trouble With Your Ticker? Bag It