Can This Football Helmet Save Lives?

More professional football players are turning up with irreversible brain disorders. Are concussions to blame? 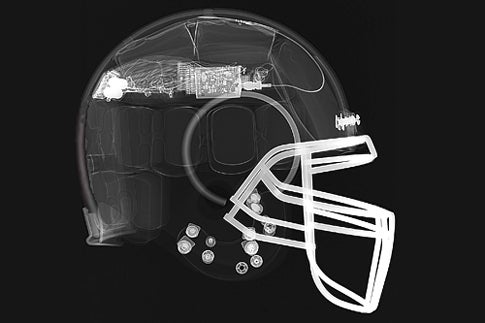 An x-ray image of a new telemetry helmet reveals its sensors.

To bet on whether the NFL will give its players concussion-sensing helmets next season, see our new PPX IPO.

Andre Waters, 44, shot himself in the head after bouts with depression. Terry Long drank a bottle of antifreeze at 45. Thirty-six-year-old Justin Strzelczyk heard voices and died in a crash while fleeing police. All exâ€NFL players, all dead before their 46th birthday, and according to autopsies performed by physician Bennet Omalu, all with signs of brain damage.

Omalu, a former neuropathologist at the University of Pittsburgh School of Medicine, believes he’s the first to pinpoint forensic evidence of a condition he has dubbed football-induced chronic traumatic encephalopathy (CTE), a variation of “boxer’s dementia.” Symptoms include confusion, mood disorders, slurred speech and memory loss. On the eve of football season, Omalu, along with a growing number of clinicians, argues that other players are at risk.

Now chief medical examiner for San Joaquin County in California, Omalu discovered abnormal proteins in each player’s brain similar to those found in 90-year-old dementia patients. He believes that scores of players have analogous damage, but proving it requires postmortem brain sectioning. “These are not the first football players to develop dementia, become destitute, and suffer from depression,” he says. “The novelty is that for the first time, we have direct, indisputable tissue evidence.”

The NFL, however, isn’t convinced. “No one is dismissing the work, but there are numerous inconsistencies and inaccuracies,” says physician Ira Casson, co-chairman of the NFL’s Mild Traumatic Brain Injury (MTBI) committee. “We refuse to jump on the bandwagon with the first report.”

Casson disagrees that the pathology is consistent with boxer’s dementia. Omalu concedes that components of boxer’s CTE are not evident, but notes that different impacts will yield different pathologies.

Kevin Guskiewicz, the research director at the Center for the Study of Retired Athletes, a frequent critic of the MTBI committee, says the NFL should consider evidence beyond brain slices. Surveying retired players, Guskiewicz found a three-fold increase in clinical-depression rates after three or more concussions. In June he presented his findings at the first-ever “concussion summit” in Chicago, a gathering of more than 250 clinicians, player representatives, and team doctors and trainers convened by NFL commissioner Roger Goodell to discuss traumatic head injuries. Casson dismissed Guskiewicz’s results as well, saying the study relied too heavily on anecdotal information. “The data is there,” Guskiewicz counters. “Now, hopefully, physicians and trainers will put it to good use.”

The NFL has come under mounting pressure to step up the care of its players. Most recently, a congressional subcommittee threatened to enact legislation that would force the league to improve its player-disability plan. Slowly, the NFL is beginning to make changes. As of this season, all players must undergo neuropsychological testing, and the MTBI committee is initiating a study to monitor brain function in retired players. The league has also implemented a new medical plan to cover players diagnosed with dementia. (It has accepted 50 of 104 applications to date.)

Meanwhile, the New Hampshireâ€based company Simbex is developing technology that could help prevent CTE altogether. It makes sensor-embedded telemetry helmets that can gauge in real time a concussive-level impact and notify personnel on the sidelines. In addition to helping staff decide when to bench a player, the technology is enabling researchers to better understand the biomechanical causes of head trauma, which in turn could lead to better headgear. Seven universities and five high schools now require players to wear the helmets. The NFL is considering the technology but has no firm plans to adopt it.

Guskiewicz, for one, insists that the NFL needs to do more. “Is it smarter to assume the risk is there, until proven otherwise, and treat the players more cautiously,” he asks, “or should we assume it’s not there and risk the chance?”