Shock Your Way to Happiness

The Doctor unveils the workings behind shock treatment 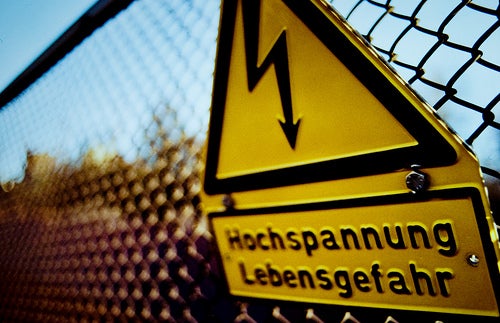 Don’t stick you finger in the electrical socket! That’s one of the first things you learn as a kid, right? Otherwise, as all proper cartoons show, you’ll end up with singed eyebrows and a wild poufy Einstein-style ‘do. But all joking aside, electrocution is a serious business. People die from electrical burns, whether they have been hit by lightening or deliberately executed in the electric chair. (If you’re worried about the former, and you find yourself the tallest object in an open field during an electrical storm, LIE DOWN. If you are worried about the latter…stay out of trouble. Or write to your congress person.) Bottom line, most people prefer not to be zapped with electricity…except when it can cure disease.

Psychiatrists currently use electroconvulsive therapy (ECT) for a variety of psychiatric disorders, but most commonly ECT is used for severe, treatment-resistant major depression, usually for inpatients who are too depressed to function outside the hospital.

That’s to say, for patients who remain depressed, even when they have received a variety of different drugs and therapy. Why does ECT work? The current theory suggests that ECT induces seizures which, in a sense, can help “reset” a person’s brain, improving their mood and cognitive functioning. ECT can be especially helpful in older patients for whom certain medications may cause intolerable side effects, such as dangerously low blood pressure.

You may have seen electroconvulsive therapy (ECT) portrayed in the movies…in a, shall we say, less than positive light. Some poor terrified psychiatric patient (let’s call him Fred) is strapped to a table, wide awake. A merciless psychiatrist turns up the dial – despite his restraints, Fred’s body nearly jumps off the table as millions of volts of electricity shoot through his brain. Afterwards, Fred is weak, vague and confused, a mere shadow of his former self. (If you saw the movie “A Beautiful Mind,” you saw Russell Crowe undergo insulin shock therapy, an old-fashioned form of treatment based on ideas similar to ECT.)

These days, electroshock therapy is nothing like the horror show portrayed by the media. Patients are under anesthesia during the treatment, so they do not feel any discomfort during the procedure. However, a frequent patient complaint is memory loss – some patients lose some or all of their memories from time they underwent ECT – say for a two-week period. A few people have more serious memory loss, and some have no memory loss; as with most forms of therapy, side effects vary from patient to patient. A number of famous folk have undergone ECT, some successfully (like iconic fashion designer Yves St. Laurent) and some not so successfully (like poet Sylvia Plath.)