An Injection Straight to the Brain Makes Rats Forget Their Fears

Just about everyone can think of some memory he or she would rather forget. For some, it’s something like a... 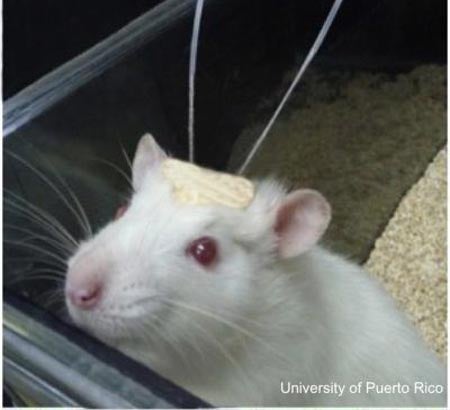 Just about everyone can think of some memory he or she would rather forget. For some, it’s something like a relationship gone wrong, or high school. For others — like soldiers returning from war zones — those bad memories can be highly disruptive, impeding the ability to live a normal life. But Puerto Rican researchers may have found a way to reduce the fear associated with our memories by injecting a naturally occurring chemical directly into the brain, replacing anxiety with feelings of security.

This isn’t the stuff of sci-fi; the procedure doesn’t pave over miserable memories with better, different ones. It works by chemically mimicking what’s known in the lab as extinction learning. For instance: Researchers can instill a learned fear in lab rats in a Pavlovian fashion, sounding a certain tone while applying a light shock to the rats. After a while, rats learn to fear the pain associated with the chime. Researchers can undo this process via extinction learning, which is the exact opposite; sound the chime but don’t present the shock. Do this enough times and rats can unlearn that fear.

Researchers at the University of Puerto Rico set their experiment up around just such a model, but they wanted to extinguish the fear chemically, rather than through repetitive learning. To do so, they injected a naturally occurring chemical known as brain-derived neurotrophic factor (BDNF) into the rats’ infralimbic prefrontal cortexes. BDNF is involved in several types of learning, including extinction learning. The researchers hoped that by artificially upping the amount present in the prefrontal cortex they could coax the rats into unlearning their fear of the chime.

In experiments, rats were conditioned to fear the chime via electric shock until they would consistently freeze up each time the chime sounded. The next day, rather than undergoing extinction learning, the variable group was injected with BDNF. The control rats were left untouched. The next day, researchers began sounding the chime. The control rats seized up as expected, fearful of the shock. The variable rats did not. Further testing showed that the BDNF experiment very closely mirrored genuine extinction training.

The rats still retained their memory of the chime and the shock, but the associated fear was greatly reduced. As such, this research could have important implications for the treatment of anxiety and post-traumatic stress disorder. PTSD in particular is thought to be at least partially caused by the brain’s inability to extinguish feelings of intense fear, and differences in levels of BDNF could explain why two people who share a traumatic experience can be affected differently by it. BDNF therapies could potentially lead to a means not to forget our bad memories, but to help us live with them.