Shock to the System 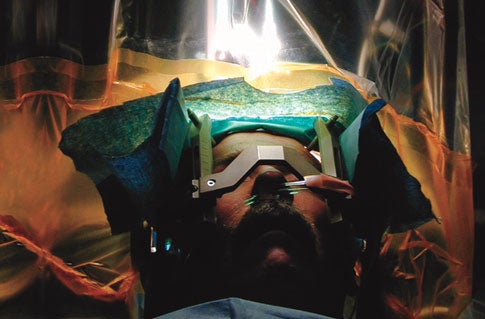 For six years after a brutal beating, a 38-year-old man lay in a minimally conscious state, effectively unable to communicate. Then, with the permission of his family, a team of neuroscientists at New York”Presbyterian/Weill Cornell Medical College and the Cleveland Clinic Foundation attempted a last-resort experimental treatment known as deep brain stimulation, or DBS. Using brain scans as a guide, they implanted tiny electrodes deep in the man’s head and wired them to a pacemaker-like device beneath his collarbone.

Once switched on, the device began sending pulses of electricity to his thalmus, an area of the brain thought to influence consciousness. After two years of therapy, the scientists rocked the medical world this October with their stunning results: The man was awake, able both to speak and to understand speech.

That was the first reported case in which DBS had proved effective in a patient suffering from a brain injury. And the technique has been steadily emerging as a potentially powerful treatment for a wide range of diseases and disorders, including depression, Tourette’s syndrome and Parkinson’s disease. More than 35,000 Parkinson’s patients have the electrodes implanted in their brains, and although no overall statistics have been released, neurologists estimate that 80 to 90 percent of patients experience massive reductions in their tremors. “Sometimes it’s startling, to the point oftears in everybody’s eyes,” says Stephen Grill, a neurologist at the Parkinson’s and Movement Disorders Center of Maryland.

With such remarkable clinical success, DBS is doing more than giving patients new hope-it’s changing how scientists understand brain disorders. Neurologist Helen Mayberg of Emory University says she conceives of depression as a kind of circuit-board malfunction rather than a simple chemical imbalance. “It’s not just about being a quart low on serotonin,” she says.

Mayberg is currently leading a research study testing DBS’s effectiveness against treatment-resistant depression. More than one million people suffer from this condition and, until now, their only option was electroconvulsive therapy, the neurological equivalent of a cardiac defibrillator. ECT has proven effective at fighting depression-more than 100,000 people receive it annually-but it can also lead to memory loss. DBS, in contrast, delivers smaller zaps-usually around three volts-to better-targeted areas of the brain, with no reported side effects related to memory or anything else. “We’re not just rebooting the computer,” Mayberg says. “We know precisely what we want to have happen.”

By tweaking specific parts of the brain, scientists could in theory not only restore damaged areas but also enhance uninjured ones, improving memory and raising IQs in healthy people. Cornell Medical College neurologist Daniel Herrera recently announced that, when applied to a major communication center in the brain called the subthalamic nucleus, DBS actually improved rats’ memory.

Yet for all the treatment’s potential, scientists don’t know exactly why it’s so effective. “We know that it’s working,” says Michele Tagliati, co-director of the brain-stimulation program at the Mount Sinai School of Medicine. “We don’t know exactly how it’s working.” And although the side effects have so far been minimal, the scientists are quick to point out that DBS is still brain surgery, so there can be complications, such as lesions developing from the implanted electrodes.

Mysterious as DBS is, researchers are optimistic about its potential, and there’s still plenty of room for refinement. Tagliati and other scientists are exploring possible changes to the electrodes, along with variations in the type and amount of current that they use. Psychiatrist Sarah Lisanby, director of the brain-stimulation division at Columbia University, says the combination of current clinical success and possible technological advances points to a bright future for the field: “We could very well be standing on the threshold of a new frontier.”