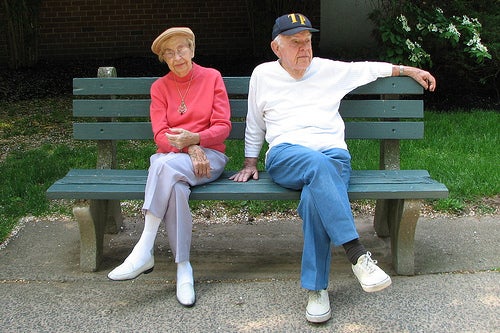 With all the talk of cougars, starter wives, and sugar daddies floating around these days—not to mention sky-high divorce rates—conventional wisdom is that the initial passion that brings two people together simply cannot last. Monogamous, till-death-do-us-part love is out of fashion. However, a recent study is doing its part to reverse that common outlook and bring a little bit of hope to those still wishing to grow old with someone.

The study, which was presented at a meeting of the Society for Neuroscience in Washington, D.C. last week, took brain scans of people who insisted they were still madly in love with their partners, even though they had been married for decades. When shown a picture or their spouse, Magnetic Resonance Imaging (fMRI) scanned the brains of 10 women and seven men* who had been married, on average, 21 years and took a snapshot of their cerebral reaction. When compared to another study of 10 women and seven men who claimed to have fallen in love only a year prior to the test, the results were strikingly similar.

It is true that old love does not equal new love. In the Old Love camp, gone is the anxiety over what to wear, what to talk about, is it too soon to call, and whether there is food stuck in your teeth. Instead, couples who have been together for many years demonstrate a calmer yet deeply attached kind of love for one another, one that is less obsessive than that of people who have recently fallen for each other, but which understands partners as central to each other’s lives. Scientists acknowledge past research that argues romantic love is generally over 12 to 15 months into a relationship, but add that this study proves that particular timeline is not a steadfast rule. And no, Old Love couples are not sleeping in separate beds nor carousing with younger partners. They still like to have an exciting relationship in the bedroom, and continue to want connection, engagement, and a sex life.

This study is a welcome addition to research on love and suggests that the guerre d’amour continues between young, passionate lovers and comfortable, tried-and-true couples. Of course, some will never believe the answers science gives them when it comes to such an emotional topic. These people might turn to the arts instead, where you either side with Pat Benetar, who believes love is a battlefield, or with that other famous 80s singer, Whitney Houston, who insists she will always love you.

*This may seem like a small sample, but scientists note that it is standard for fMRI studies.