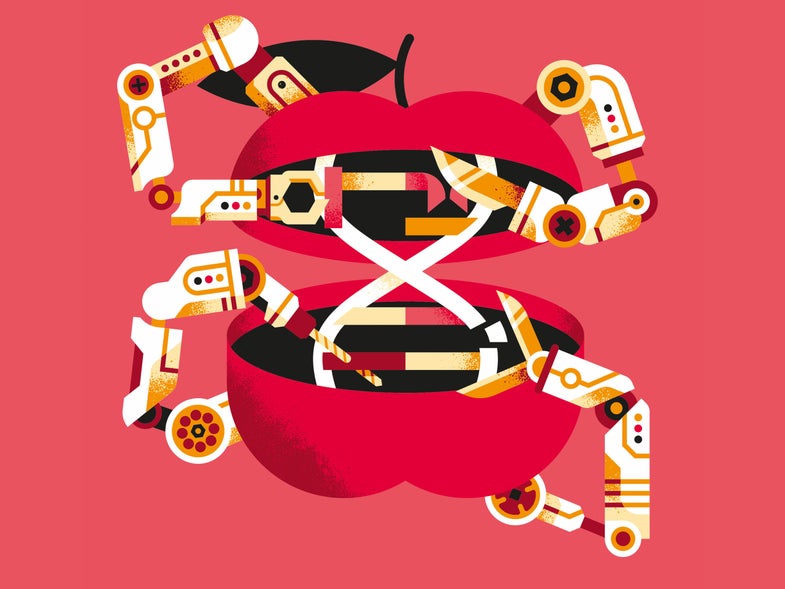 Not since Alice in Wonderland’s hookah-smoking caterpillar doled out his weird wisdom atop a ­psychedelic-looking mushroom has the lowly fungus so upstaged the action. At most dinner tables, mushrooms are ancillary characters. But this past spring, the food and agriculture worlds became obsessed with one mushroom in particular: Agaricus bisporus, known as the white button mushroom—that all-purpose fungus you jam by the fistful into a plastic bag at the market and abandon in the fridge, only to find it slimy and brown several days later. Science has now found a way to delay that browning, using the buzzy genome-editing tool CRISPR, which can trigger changes in the DNA of plants, humans, and other animals with unprecedented precision and speed.

The name—Clustered Regularly Interspaced Short Palindromic Repeats—refers to a system that targets genetic code. The makers of the nonbrowning mushroom, at Pennsylvania State University, used the CRISPR enzyme Cas9, which can delete base pairs, changing a gene and altering its expression.

But that’s not the part that got people talking. In April, the U.S. Department of Agriculture said that it would not regulate the CRISPR-altered mushroom. To organic purists and eco-watchdogs, a genetically modified organism (GMO) had been given a green light to go to market without oversight: no warnings about what was in our food and no investigations into its environmental impact.

The outcry from food warriors was swift: How had a genetically tweaked food evaded regulation?

It hadn’t, exactly. “The USDA simply decided that, legally, the mushroom didn’t fall within their regulatory system,” says Greg Jaffe, the biotechnology director at the Center for Science in the Public Interest.

The USDA regulates genetically modified (GM) plants only for their potential to be “plant pests”—whether they can infect other crops. If there’s that chance, it can require further testing and a permit before the crop is planted. A handful of modified GM plants have previously managed to escape regulation for various reasons. But the CRISPR process itself is what helped push the mushroom past the red tape. While most GM crops use bacteria or viruses to introduce new genes into a plant, CRISPR needed only a few snips to the genetic code. Since the CRISPR’ed mushroom contained no plant-pest DNA, the USDA decided it was out of their hands. (The Food and Drug Administration still may weigh in before the ’shroom goes to market.)

Still, consumers are wary. Ever since federal regulators approved GM seed crops 20 years ago, we’ve been a nation torn—and often misinformed—over so-called Frankenfoods. The organic-food lobby and environmentalists vigilantly warn us about potentially harmful side effects to our health and to the ­planet. The issue has created a hothouse split between ­science and the public. A 2015 Pew Research survey found that more than 57 percent of Americans believe GMOs are “generally unsafe.” Meanwhile, 88 percent of scientists surveyed say they are “generally safe.”

But we’ve come a long way since the early days of GMO projects, when herbicide-resistant crops led to “superweeds” immune to chemical treatment. Such stories make us justifiably wary of playing God with our food. But nearly everything we eat is genetically modified. (See freshman biology: Gregor Mendel). The real superweeds today have grown up around, and are choking, our legal-approval apparatus. Oversight has become part of the problem; our biotech regulatory framework is outdated and ill-equipped to deal with rapidly evolving tech. (The White House has promised to change that.)

The biggest mistake we can make, as a curious and concerned public, is to prematurely vilify CRISPR and the food it makes. We should instead push for ­informed, science-based evaluation. It could help improve the global food supply. The whole reason for a tweaked mushroom is that it resists bruising during harvest and browning in your fridge. That means you’re more likely to eat it instead of tossing it—no small success in a country where 40 percent of food ends up in a landfill. And CRISPR itself opens up a new world of food development, since it’s cheap and easy to use, making it accessible to smaller labs and breaking Big Ag’s GMO monopoly.

So let’s not stall this science at a time when better, hardier, more efficiently grown food is a rising need. Gene editing requires funding and research—but it also requires public support to make it viable. There is great potential for smaller companies to make food that can nourish a growing population without harming the planet. Traditional bioengineering has a very high bar for entry. CRISPR lowers it: It democratizes the technology so engineered plants are not just the domain of a handful of huge companies making feed crops, but can be done by one guy in a university lab with a great idea.

This article was originally published in the November/December 2016 issue of Popular Science, under the title “Do Not Fear Gene-Edited Food.”