Can New GMO Techniques Make Crops That Are More “Natural”?

Over the past 10,000 years—and especially in recent decades, as agricultural technology has improved—plant breeders have coaxed crops to be... 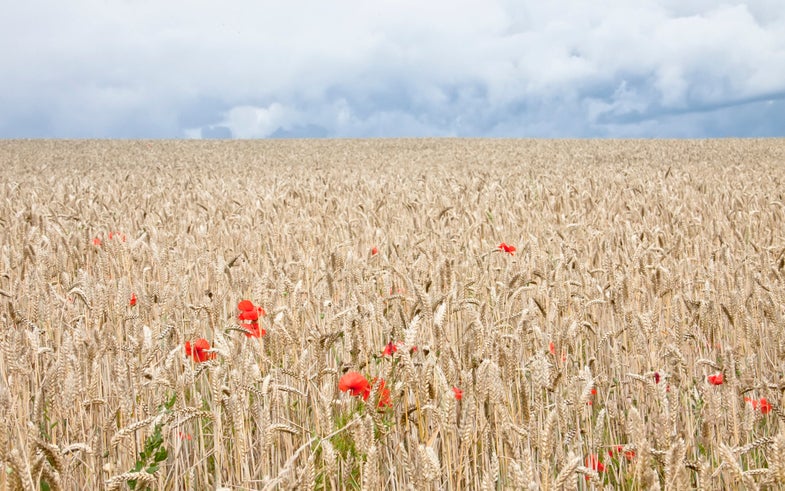 Over the past 10,000 years—and especially in recent decades, as agricultural technology has improved—plant breeders have coaxed crops to be increasingly easier to farm. This has involved, in part, selectively breeding plants for high yields of fruit, seeds, or whatever other edible bits we want to eat, as well as making those bits more harvestable. For example, wild varieties of many plants drop their ripe seeds to improve their chances of reproduction, but breeders have nudged crops to hold onto these seeds longer so farmers can collect them.

But selective breeding also can drive the loss of other potentially useful characteristics, such as resistance to insect pests or environmental stresses including drought and flood. In a new review paper, which published today in Trends in Plant Science, researchers from the University of Copenhagen propose to identify genes responsible for these characteristics and—in a twist on “rewilding,” a conservation concept that aims to bring landscapes back to an allegedly more natural state—genetically engineer modern crops to be more like their heartier ancestors.

“Our crops are designed so they can grow best under optimal conditions with respect to nutrients in fertilizers, pesticides, fungicides, and everything. We take really good care of them, we water them,” says Michael Palmgren, a plant biologist from the University of Copenhagen and lead author of the paper. “But the weed in my garden, I don’t need to take care of—it grows very well and gives high yield even though I don’t give it anything.” The idea, adds Palmgren, is to make crops tougher, perhaps like a weedy relative, so that they don’t need as much synthetic fertilizer and pesticide.

Although the approach requires genetic engineering in order to introduce relevant genes into a crop, the authors describe two differences compared to GMOs that are currently on the market (this, along with the “rewilding” label, is partly an attempt to make the crops more palatable to consumers who view GMOs as unnatural). First, rather than introducing genes from widely different species, such as the insecticidal bacterium genes in Bt corn (“transgenic” for “different beginning”), the researchers suggest using genes that come from related plants, such as domesticated wheat and a wild relative (“cisgenic” for “same beginning”).

Second, instead of using current genetic engineering techniques, which can’t strictly control where new genes end up in the plant, the researchers propose precision mutagenesis, a relatively new technique that is also sometimes referred to as genome editing. The most well-known version is CRISPR/Cas9, which uses a specialized enzyme to snip away specific regions of DNA and can introduce new genetic information efficiently and precisely. So far, scientists have used the technique in the lab to manipulate genes in fruit flies, zebrafish, yeast, rice and even human cells.

In theory, precision mutagenesis would allow breeders to add new genetic information to a plant without inadvertently introducing unwanted genes or deleting desirable ones. Palmgren’s team is already using the approach to reintroduce lost micronutrients into rice, a project that may be complete in the next year or so.

The authors also offer a philosophical, legal, and economic framework for the “rewilded” crops, arguing that these shouldn’t be regulated as GMOs because they are fundamentally different. Palmgren says: “If we make a plant in which a known mutation has been introduced at a known site, and this mutation causes the plant to revert to a condition that it had before it was cultivated, would this be a GMO?”

The differences, though nuanced, may be evident in a philosophical debate, but in reality it seems unlikely that consumers who are opposed to GMOs will be open to any crop that results from genetic tinkering in the lab regardless of whether that tinkering leads to an older version of the same crop. Even plant experts might not agree that the distinction matters. “Most scientists do not really believe that cisgenesis is fundamentally any different from transgenesis,” says Kent Bradford, a plant scientist and the director of the Seed Biotechnology Center at the University of California, Davis. “Neither presents unique risks that have not been encountered in traditional breeding or cannot be addressed in risk analyses.” The approach may, however, sidestep regulations in the US.

Others argue that plant breeders already recognize agriculturally-useful traits in wild varieties, and many labs that are actively pursuing such research. According to Stephen Jones, a plant geneticist at Washington State University, the authors of the new review “ignore that any success in plant breeding in terms of using wild genes has come through traditional breeding. In wheat they’ve been doing it for at least 60 years and it works and it is ubiquitous. To use it as an excuse to make GMOs is a bit absurd.”

Although it may be possible to find helpful genes in wild crop relatives, whether those genes can help with environmental tolerance without hurting yield will still be difficult, adds Bradford. “Plants often deal with stress by slowing or stopping growth, and this may be a good strategy to survive a bad spell. However, making crop plants more ‘conservative’ in this sense is often at odds with encouraging them to grow for maximum yield.”

Nuances and caveats aside, the paper brings up thorny issues that scientists, the agricultural industry, farmers, government agencies, and consumers will have to face in coming years as CRISPR and other new technologies make it easier and easier to manipulate plant genes.