CRISPR-Modified Corn May Soon Be Ready For Market 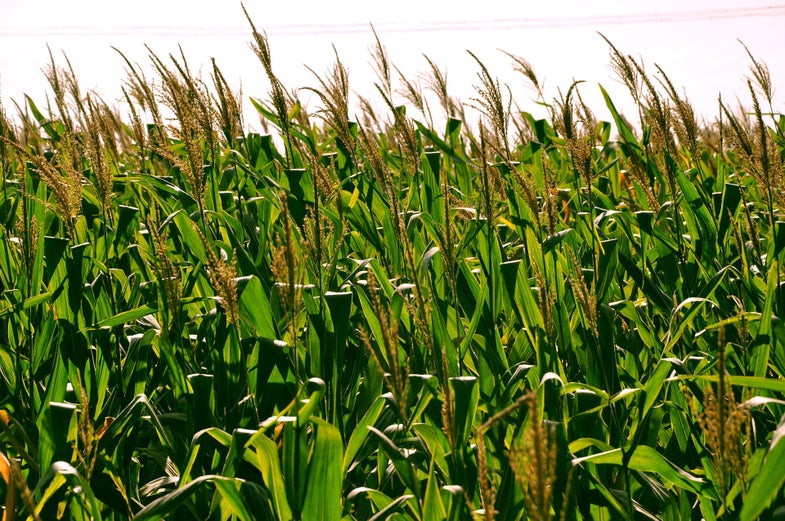 Scientists are already using gene editing enzyme CRISPR to alter human embryos and make antibiotics less resistant. And though experts have predicted that crops were soon to follow, there hasn’t yet been one close to hitting the market. Now, researchers at DuPont Pioneer, the agriculture branch of the multi-billion-dollar conglomerate, have published a study about a strain of corn engineered with CRISPR to be more resistant to drought. It’s one of several CRISPR-modified crops that may soon be coming to market.

The technique outlined in the study, published August 17 in Plant Biotechnology Journal, is particularly difficult in plants, says Joyce Van Eck, a professor at the Boyce Thompson Institute, focused on plant research and affiliated with Cornell University. “The fact that they’ve done this, and shown success with it is really amazing. It’s groundbreaking,” she says.

For millennia, humans have been crossing strains of crops to make them healthier, hardier, and easier to cultivate. But the term “genetically modified organism” (GMO) typically refers to crops with a genetic code that has been altered in the lab. This often means that scientists are adding DNA from other organisms to make this crop better in some way—increasing the amount of food you can get from one plant in less time, making it more resistant to disease or extreme environmental conditions like frost or drought, or increasing its appeal to consumers by slowing the rate at which it spoils. In the past, scientists have made these genetic changes with two main tools, called zinc finger nucleases and TALENS. These enzymes are typically delivered into plant cells using a specially-designed virus or a gene gun, which bombards cells with the genetic material researchers are trying to add. And though these techniques work to alter a plant’s genome, they’re more expensive to create and more limited in where they can alter the genetic code than CRISPR.

That’s part of the reason CRISPR has caught on so quickly, Van Eck says—it’s cheap, relatively easy to use, and can make precise changes to the genes. In this study, the DuPont engineers didn’t use CRISPR to alter maize’s DNA per se; instead, they changed how one single gene is expressed. Earlier studies had shown that if ARGOS8 was over-expressed, the plant would have a higher yield under stressful drought conditions, without changing how much food it can produce under typical conditions, the researchers write. When the researchers tested their CRISPR-altered maize in eight locations across the U.S., they found that it performed much better under dry conditions compared to conventional crops and those engineered in traditional plant breeding processes outside the lab.

The advantages of such a crop would be felt first with farmers, especially those who are trying to eke out a living when faced with more frequent and longer droughts, Van Eck says. Consumers would also benefit—more people would have access to food, and prices for those foods would be lower.

DuPont has not yet stated that it intends to put drought-resistant CRISPR-modified corn on the market. And if it were to do so, the plant would need to be approved by the U.S. Department of Agriculture (USDA), the agency that sets standards to ensure that the crops reaching consumers’ plates are safe for them to eat. But it’s likely that DuPont’s maize won’t be subject to the same sorts of safety evaluations as are typical GMOs. Earlier this year, the USDA told a team of researchers that it would not regulate its CRISPR-modified mushroom, and there’s reason to believe that DuPont’s crop would fall into the same regulatory gap. “The fact that they used the gene gun and did not use any non-maize DNA will help in making the regulatory approval more straightforward,” she says.

Van Eck doesn’t think that consumers have any reason to be wary of CRISPR-modified crops. But with this crop, as with many others that have clear benefits to humans, Van Eck predicts that people will still be resistant. “When it’s a [genetic] modification made in the lab versus one made in the field, there’s still this bias, and that’s where the emotional part comes in,” she says. “People perceive it as an emotional issue.”

No matter which crop makes it to market first, Van Eck predicts that it won’t be the last. DuPont researchers are also finding other uses for CRISPR to improve crops like soybeans, canola, wheat, and rice, according to a press release. Other labs, both academic and commercial, are using CRISPR on other common crops like rice.

And though some people may look to genetic engineering as a way to feed an explosive human population struggling to feed itself on a warming planet, Van Eck notes that technologies like CRISPR aren’t a panacea. “Genome editing, no matter how it’s done, is a powerful tool to be able to make these changes to help improve [plants’] traits. But it’s a tool—it’s not going to surpass plant breeding or other type of modification. It’s a tool in the toolbox.”

**Correction (9/8/2016 11:00 AM): A previous version of this article stated that DuPont planned to put CRISPR-modified, drought-resistant corn on the market in the near future. Though DuPont has announced its intention to put another kind of CRISPR-modified corn on the market, it has not announced any plans to do the same for the drought-resistant corn. This has been corrected; we apologize for the error.