How worried should we be about solar flares and space weather?

NASA's heliophysics experts explain how space weather forecasting works, and why geomagnetic storms seem to be more disruptive than ever. 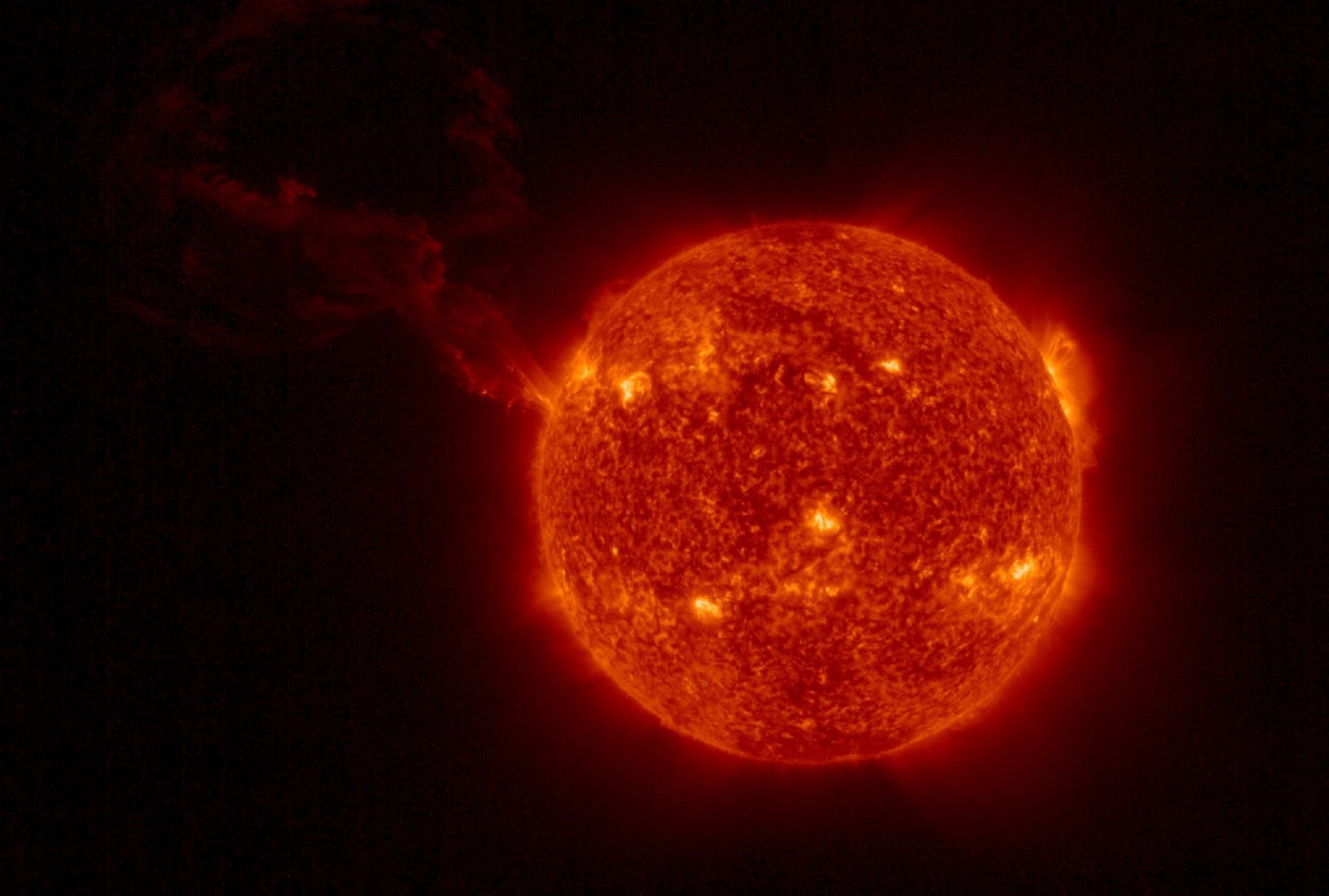 The largest solar flare ever observed in a single image together with the full sun in view. Solar Orbiter/EUI Team/ESA & NASA
SHARE

The sun roils with heat as thermonuclear reactions in its center produce high amounts of energy. Day to day, that energy is responsible for making Earth livable. But sometimes, solar radiation can burst forth, sending highly energetic particles hurtling at top speeds into space. If our planet is in the radiation’s path, it can wreak havoc on our lives.

Those explosions of solar radiation make up what is called “space weather.” And it can be just as disruptive as terrestrial weather, though maybe not as frequently as the headlines warn.

“Our star is really an enormous thermonuclear furnace. At its center, the temperature is between 15 to 17 million degrees Celsius, and roughly 600 million tons of hydrogen get fused into 596 million tons of helium,” says Madhulika Guhathakurta, program scientist for NASA’s Heliophysics Division and lead program scientist for the “Living With a Star” initiative, which studies the ways in which Sun-Earth system affects human life and society. Every second, those four million missing tons are transformed into energy—what we see as sunshine. But “even a slight change in this very precariously controlled activity can have drastic consequences on Earth,” she explains.

Although such consequences are rare, satellites and technology that relies on electricity and wireless networks are particularly vulnerable. In 1989, a geomagnetic storm set off by a powerful solar flare triggered a major blackout across Canada that left six million people without electricity for nine hours. In 2000, a solar eruption caused some satellites to short-circuit and led to radio blackout. In 2003, a series of solar eruptions caused power outages and disrupted air travel and satellite systems. And in February 2022, a geomagnetic storm destroyed at least 40 Starlink satellites just as they were being deployed, costing SpaceX more than $50 million.

What exactly is space weather?

Generally speaking, the term “solar storm” describes when an intense eruption of energy from the sun shoots into space and interacts with Earth. Charged particles constantly flow away from the sun into space in what is called the solar wind. But more significant eruptions can originate as solar flares, often from temporarily dark patches called sunspots, and intense explosions called coronal mass ejections. Any kind of variation in this activity can cause auroras.

Solar flares are essentially flashes of light. They happen when strong solar magnetic fields protruding from the surface of the sun snap, releasing immense amounts of electromagnetic radiation at extremely high speeds. When that radiation slams into Earth, it injects energy into our planet’s ionosphere, the uppermost reaches of our atmosphere, explains Guhathakurta. The extreme ultraviolet radiation from the sun can polarize the particles in Earth’s ionosphere, she says, which can have cascading effects on any other charged particles in the vicinity–meaning anything that uses electricity is at risk.

And solar flares travel at the speed of light, says Jesse Woodroffe, who leads the space weather research program in NASA’s Heliophysics Division. That makes them difficult to anticipate and prepare for. “There is no way to get a signal to Earth faster than the solar flares, which are already traveling at the speed of light,” he notes. “So you have to predict the flare itself is going to happen. And that is a challenging science problem that we have not yet cracked.”

While solar flares are intense bursts of radiation, coronal mass ejections are explosions of energy particles. As such, they travel a bit slower. They occur when large portions of the outer atmosphere of the sun (the corona) explodes, sending superheated gas out into space. These “big blobs of solar material are ejected out at a very high speed, hundreds and hundreds of kilometers per second, but it is much slower than the speed of light,” Woodroffe adds. Those can take anywhere from half a day to three days to reach Earth, he says.

How to forecast solar storms

Forecasting space weather isn’t quite like terrestrial weather forecasts. The big difference: On Earth, meteorologists have millions of measurements they can make and integrate into their predictive models. In space, Woodroffe says, there are just a few places scientists can put instruments to observe solar activity.

“We don’t have a great picture of what happens between the sun and the Earth,” he explains. “There are very few places where you can put a reliable asset to just sit there and watch because satellites in orbit move.” Lagrange points are rare spots between the Earth and the sun where the gravity of the two objects pulls on a satellite equally to hold it in place. That’s where NASA has placed their “most vital space weather monitors,” Woodroffe says, including a joint venture with the European Space Agency (ESA). The ESA is developing another mission, called Vigil, to place a spacecraft at a Lagrange point next to the sun by the end of this decade. NASA’s Solar Dynamics Observatory, meanwhile, studies the sun while orbiting Earth.

With their cameras and sensors, scientists monitor the sun for a change in the brightness emerging from its surface, Woodroffe explains. A surge in brightness might appear for only a few frames—and only last for a matter of seconds.

NASA shares the data from its solar observatories with the National Oceanic at Atmospheric Administration, which provides a probabilistic forecast of geomagnetic storm warnings and watches based on likelihood and geomagnetic intensity. Depending on how fast a solar storm is moving, they can send out warnings a few days before that space weather touches Earth, or just a couple of hours.

The ultimate goal, Woodroffe says, is to improve space weather forecasting to be on par with hurricane forecasting. His Earth-focused colleagues can predict where a hurricane might go by running different models, producing a range of outcomes within a high range of confidence, he says. “We are developing those sorts of capabilities for space weather.”

In the domain of the sun

So, back to those apocalyptic solar flare headlines. Is the sun really getting feistier and threatening the collapse of modern society each week?

Space weather activity hasn’t changed recently, says Guhathakurta—but humanity has. In the past century, people have become increasingly reliant on electronics, and anything with an “on and off switch is vulnerable to solar storms,” she says.

[Related: Make your own weather station with recycled materials]

When those energy particles come surging from the sun to Earth, the disturbance they cause in our planet’s magnetic field “creates electromagnetic fluctuation and voltage fluctuation, which can penetrate beneath the ground and create fluctuations on our electric power grid,” Guhathakurta says. And with growing dependence on devices that rely on orbiting satellite systems like GPS, our electronics are even more exposed to bursts of solar radiation.

To mitigate the risk of blackouts and instruments being fried by a solar storm, technology companies can build backup power systems and other redundancies into their devices, and strategically turn them off when NOAA’s space weather forecasting system flags a high risk.

“Human civilization has been extending from our Earth-based domain into the heliosphere, or the domain of the sun,” Guhathakurta says. “We are no longer simply observing an environment which is beyond our reach, but we are actually living in it, doing commerce in it, and traveling in it. Therefore, we have to really gain the level of understanding that is required to develop and inhabit this new world.”

Correction August 2, 2022: This article has been updated to clarify the location of NASA’s Solar Dynamics Observatory, which is not at a Lagrange point. The observatory is in geosynchronous orbit around Earth.