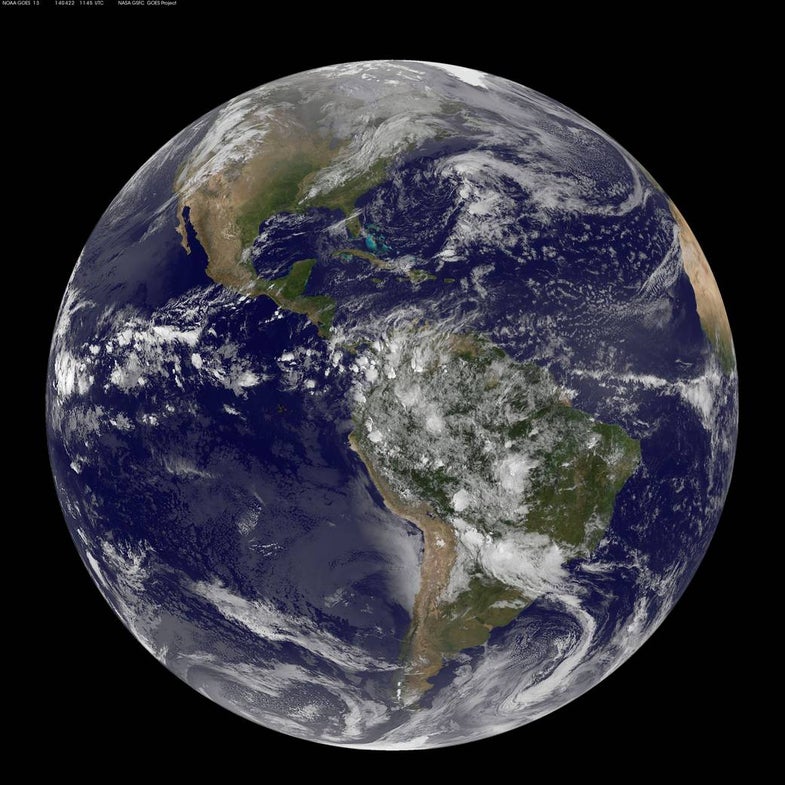 Earth is kind of overdue to see its magnetic field pull a 180 and reverse on itself. Certainly a lot of people are expecting this to happen any day now. But according to a new study published Monday in the Proceedings of the National Academy of Sciences, the magnetic field might be feeling a bit shaky, but it’s not going to flip-flop any time soon.

A team of European researchers compared the current state of Earth’s magnetic field with its tumultuous geological past, and found that the field’s current patterns of disturbance don’t resemble the same patterns that preceded previous pole reversals. Instead, the current field looks remarkably similar to situations 49,000 years and 46,000 years ago—when there was some considerable waning in strength, but no outright flip. Nevertheless, scientists are still left with a pretty unpredictable picture of what’s next for the magnetic field.

The magnetic field is essentially the reason why Earth is a nice and cozy home to life. Generated by the slow churning of the planet’s liquid core, it shields the world from cosmic radiation and nasty solar storms that would otherwise bludgeon us with charged particles from the sun. “If these charged particles ‘collide’ with the atmosphere, they can enhance loss of some atmospheric constituents, such as water,” explains Jon Mound, an associate professor of geophysics at the University of Leeds in the UK, who was not involved with the new study. In other words, if we didn’t have the magnetic field, Earth would probably look similar to a certain red wasteland located nearby, and it’s doubtful any of us would exist. Moreover, this shielding effect deflects charged solar wind particles from causing malfunctions in orbiting satellites important to GPS navigation, communications, meteorology, and surveillance, and electrical grids on the surface.

The current magnetic north and magnetic south, sitting very close to their respective poles, have been at their posts for about 780,000 years, after the last reversal. Since direct observations began in the 19th century, scientists have noticed that the field’s strength has waned by about 5 percent every 100 years, for possibly as long as the past two millennia. Of particular interest is something called the South Atlantic Anomaly, an inexplicably weak part of the field stretching over the planet from Zimbabwe to Chile, where charged particles are inadequately deflected and can wreak serious damage on satellites that pass through.

This weakening has generally been thought of as a sign the magnetic field is about to flip-flop like a politician running for president. According to Mound, a pole flip wouldn’t mean the disappearance of the pole, but it would mean a decrease in average strength by as much as 10 percent, before returning to full strength. Apocalypse: no. Dystopia, maybe!

All things considered, it’s fairly unlikely we’re going to see a polar reversal. Even if the field unexpectedly degraded into a mottled, excursion-like form, that wouldn’t even be enough to suggest a significant possibility we’d see a flip imminently occurring.

“The overall conclusion is consistent with other recent studies that indicate that the current decline in the field strength is not a precursor to reversal,” says Mound. “Field strength does fluctuate quite a bit through time and there doesn’t appear to be anything particularly unusual about either the current strength or rate of change.”

Phil Livermore, also a geophysicist at the University of Leeds, is a little less genial. He points out that the results are “purely on comparison to past behavior. There is no new evidence to suggest that the current weakening has or will stop,” especially since we still have no idea what’s causing it. While the history of the magnetic field provides useful insight into how it works and behaves, “none of these [studies] actually help us forecast the future. They merely point to an increased range of possibilities.” At its current rate of decay, the field would probably stop looking like a strong, polar structure in 2,000 years, leaving more complex, weaker field that surrounds the Earth.

Should we be worried? Mound thinks not: “The rate of change is slow enough that we can mitigate impacts.” But he does caution we don’t know enough yet about what exactly those impacts would be, and how we can safeguard ourselves.

And what if the study’s conclusions turn out to be wrong and the poles do reverse? John Tarduno, a professor of geophysics at the University of Rochester, points out the decreased shielding could create atmospheric effects. “Ozone holes might develop as high energy solar particles penetrated deeper into the atmosphere,” he says. “Beneath these holes there could be increases in skin cancer occurrences.” And the dip in field strength also leaves our power grids and vital orbital instruments open to impairment. A single bad solar storm could leaves swaths of people without electricity or unable to contact others.

Still, no one yet has found any meaningful link between geomagnetic field changes and either extinction or speciation rates, and large amounts of atmosphere would not be lost. “The effects on human life should not be dire,” says Tarduno. “On geological time scales, a reversal is a brief event, lasting about 5,000 to 15,000 years.” We might have to figure out a replacement for GPS, but we’d be able to survive.