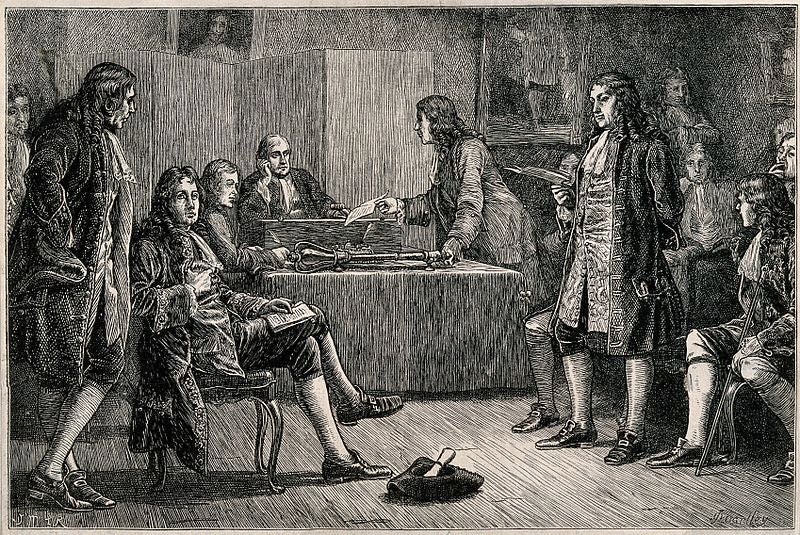 The Royal Society of London was an electric space for scientific minds. Wellcome Collection via Wikimedia
SHARE

In this excerpt from his new book, LOONSHOTS, Safi Bahcall explores the “loonshot nursery” of 17th and 18th century England.

The answer cannot be a monopoly on brilliant scientists. Scientists in nearly every nation across Western Europe contributed crucial scientific steps, as described earlier. Luck and timing always play a role in creativity and invention—the essence of a first-appearance story. Branch Rickey was the Hall of Fame baseball executive who created baseball’s farm league system for developing new talent: players compete in the Minors and rise up to the Majors if they do well. He used that system to build eight World Series teams. It was Branch Rickey who originated the saying cited in part one: “Luck is the residue of design.” England did one thing quite differently—much better than its neighbors, which set it up to be luckier than its neighbors. England established the earliest example of a successful loonshot nursery inside one country.

The Royal Society of London, created in 1660, brought together nearly all the founders of modern science in England, including Robert Boyle, Robert Hooke, and Isaac Newton. It famously played a crucial role in helping and inspiring Newton. Without the Royal Society, as one historian noted, “It is doubtful that . . . there would ever have been a Principia.” In other words, what we know today as Newton’s laws most likely would go by some other name—or names. Gottfried Leibniz, for example, developed calculus independently, in Germany, around the same time as Newton. Christiaan Huygens, in the Netherlands, developed the idea of centripetal force, the wave theory of light, modern probability theory—and he invented the pendulum clock. Daniel Bernoulli in Switzerland, Leonhard Euler in Germany, Pierre-Simon Laplace in France—all were giants of mathematics and physics who arrived not long after Newton.

The Royal Society helped Newton and England win a race against time, a competition to discover truths of nature. But the Society didn’t come together purely for basic research: “Science was to be fostered and nurtured as leading to the improvement of man’s lot on earth by facilitating technologic invention.”

In 1667, the Society’s first historian and promoter, Thomas Sprat, wrote of “extraordinary Inventions” such as “Watches or Locks or Guns” and “Remed[ies] . . . against an Epidemical Disease” and declared that the “Publick should have Title to these Miraculous Productions.”

The purpose of the Royal Society, wrote Sprat, “goes to the Root of all Noble Inventions and proposes an infallible Course to make England the Glory of the Western World.”

A little more boldly stated than Vannevar Bush and his report. But it’s the same basic idea, three centuries earlier.

As Sprat wrote those words, Robert Boyle was completing his experiments on the expansion and compression of gases, carried out by Hooke as his assistant. Hooke had built for Boyle what would soon become one of the most famous research devices in Europe: an air pump. Boyle used the device to discover the law now named after him (the pressure of a gas is proportional to its density).

After a few years working for Boyle, Hooke grew busy with his own work (inventing the microscope, proposing a universal gravity), so in 1675, Boyle hired a new assistant, a French medical doctor named Denis Papin. Papin continued the air-pump experiments, but added a twist. He was curious if he could add a piston to the pump and somehow create a working cycle of compression and decompression.

In 1687, Papin published a book describing how to use the Hooke- Boyle air pump to cook food. He called his new device a “Digester of Bones,” since it squashed bones into edible bits. The 1687 book was a sequel to his first book, on the invention of what is now called a pressure cooker, so Papin called it A Continuation of the New Digester of Bones. Buried in the back, after a section on how to cook cows’ horns and dried vipers, in what might be called the greatest example of burying the lead in history, was the answer to his puzzle on how to add a piston to Boyle’s air pump. It described the key components for a new invention: a steam engine.

Although the scholars of the Royal Society paid little attention to Papin’s ideas, especially since they appeared in the back of a book about cooking, those ideas did not escape the notice of a craftsman in Dartmouth, England, named Thomas Newcomen. Newcomen had little interest in philosophy but a lot of time for useful gadgets, like pressure cookers.

In 1712, Newcomen turned Papin’s movable piston inside a pump into the first practical, workable steam engine. Newcomen’s invention rapidly spread throughout England. Over the next century, inventors continued to improve its efficiency. The engine soon elevated production of resources and goods far, far past the limits set by human or animal power, the limits that had held human societies around the globe to a fixed level of production for thousands of years. The change, which began in England and soon spread to the rest of Europe, fueled Western Europe’s rapid rise to global power, the defeat of much larger and older empires, and an exponential growth in human population.

From LOONSHOTS by Safi Bahcall. Copyright © 2019 by the author and reprinted with permission of St. Martin’s Press, LLC.