The record-breaking ocean lease will power close to 2 million homes. But it also has the potential to improve supply and labor chains in the US. 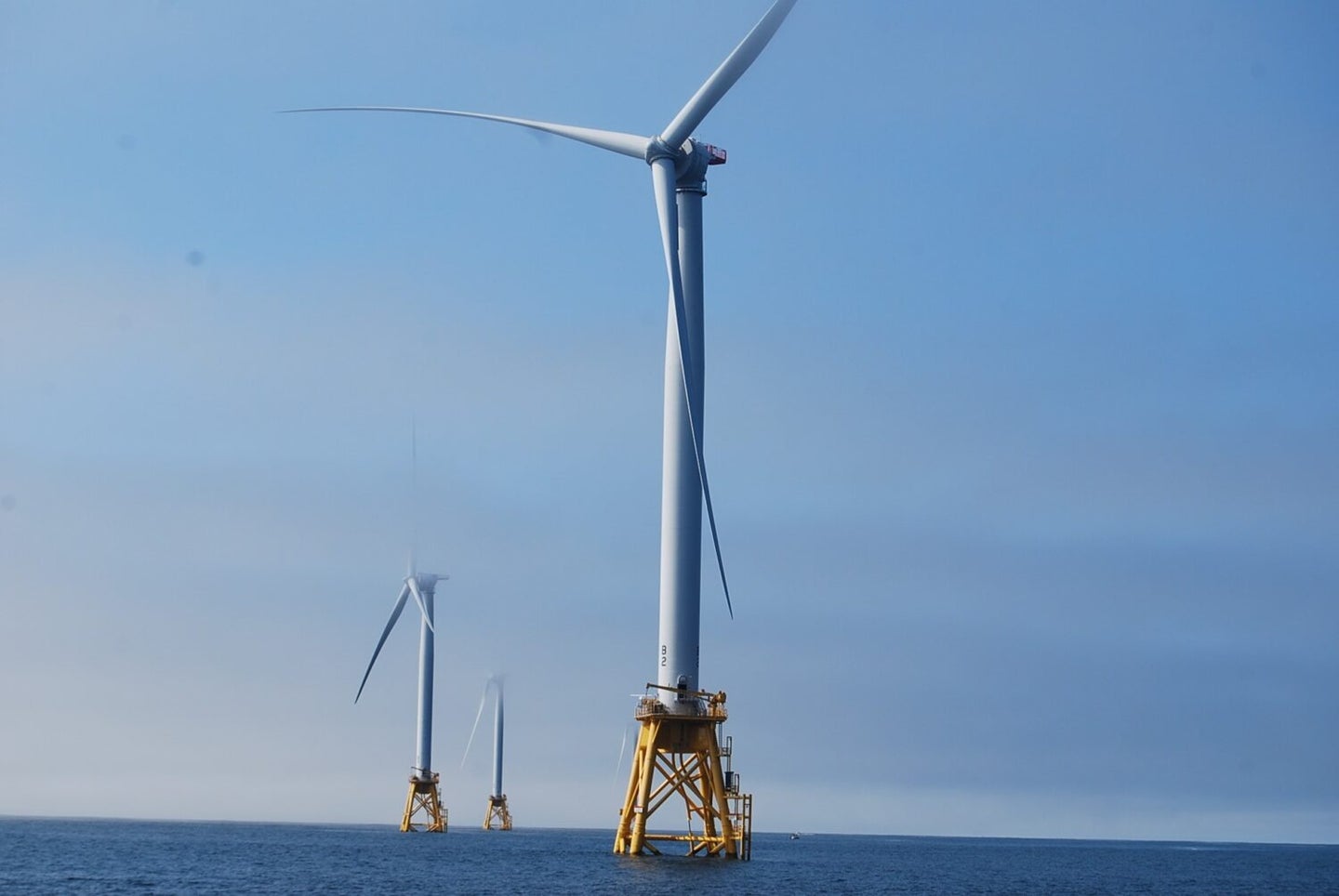 Turbines like these are the backbone of a Biden administration plan to generate 30 gigawatts of wind energy nationally by 2030. Bureau of Ocean Energy Management
SHARE

Along the Atlantic coast, off New York and New Jersey, a stretch of ocean that’s 2.5 times the size of New York City was just leased by the US government to six energy companies. Those developers have one goal: to turn the 488,000 acres of water into offshore wind farms to power the two states with renewable energy.

The Bureau of Ocean Energy Management announced the sale on February 23, at the end of 64 rounds of auction, for the area known as the New York Bight. It’s the largest US marine area ever offered in a single auction, at a staggering $4.37 billion. The lease’s giant price tag was splashed across the news, but the money, as much as it is, is only a small part of the story. A more complicated engineering challenge is ahead.

Building numerous wind turbines several hundred feet tall, miles from shore, is a massive undertaking. The Bight is expected to produce 5.6 to 7 gigawatts—enough power for more than 1.9 million homes—ushering the US toward the Biden administration’s nationwide goal of generating 30 gigawatts of wind power by 2030. This plan, known as 30 by 30, means building 2,100 wind turbines and foundations, laying over 6,800 miles of cable, and building several highly specialized ships to get the job done, according to the National Renewable Energy Laboratory.

Meanwhile, the offshore wind industry is investing millions of dollars in a domestic supply chain, which includes factories, port upgrades, vessels, and workforce training, according to a report from the national trade association American Clean Power.

There is still a long ways to go. “The offshore wind supply chain in the United States is nascent,” says Brandon W. Burke, a managing consultant for Ramboll, a Denmark-based firm that advises offshore wind energy developers. “It is certainly developing more and more rapidly, with increased alignment between federal and state governments—but the reality is there’s a lot of work to be done.”

Where to build a massive offshore wind farm

Like these smaller projects, the Bight is close to the coast and near cities with high levels of electricity demand. It shares two other key features, too. First, there are nearby ports that can provide the manufacturing needed to build the wind farms’ structures. And second, the area’s transmission grid can handle the injections of power. What’s more, New York and New Jersey set ambitious renewable energy targets—9 gigawatts and 7.5 gigawatts, respectively, by 2035—making the Bight an attractive option.

The farm would rest on the broad and gently sloping Outer Continental Shelf of the Atlantic. Here, the water is relatively shallow, so wind turbines can be fixed to the ocean floor. The majority of fixed-bottom wind facilities use steel tubes or lattices inserted into the seabed, according to Burke. The blades are then mounted on top of those solid foundations. There are also floating-bottom farms, which are anchored to the bottom of the sea with chains. These could be used in deeper waters like the Pacific West Coast, where wind farms have been proposed off California, Oregon and Washington.

Due to the sheer size and height, building a turbine’s foundation and components takes a lot of consideration. A single blade can be as long as 351 feet, or more than 124 baseball bats laid end-to-end. These extremely long turbine components are transported out to sea after being built or assembled at a port to minimize time spent on the water.

For the Bight, everything from the shore’s high-water mark out to three nautical miles is state jurisdiction, which means New York and New Jersey can independently develop the supply chains they need to build an offshore wind farm, Burke says.

To actually get these parts out onto the water, it takes a fleet of about 27 vessels per offshore wind project. That can vary depending on the distance to shore and how many turbines there are, says Claire Richer, director of federal affairs for offshore wind at American Clean Power. These vessels range from seabed preparation ships to cable lay boats to service operation vessels—also known as floaters because they stay out on the water after construction.

The limited number of wind turbine installation vessels (WTIVs) means there’s an especially tight bottleneck in the US for new projects, Burke says. Last year, a vessel named Charybids was commissioned for $500 million as the first WTIV to sail with a US flag. Owned by Dominion Energy, the 472-foot ship is currently being built in the Gulf of Mexico and will use more than 14,000 tons of domestic steel.

Once completed, Charybids will fill a gap in the US wind farm supply chain, chipping away at American reliance on European manufacturing. The WTIV jacks-up on movable legs to rise in the water, providing a stable surface to carry heavy loads and install the foundations and turbines using cranes. Dominion Energy has already planned to lease its new vessel out to the Revolution Wind and Sunrise Wind projects by Ørsted and Eversource, two energy companies that serve Rhode Island, Connecticut, and New York. Charybids will also work on the Coastal Virginia Offshore Wind project to expand that pilot program to 176 turbines, generating a total of 2.6 gigawatts.

Offshore wind farm industries in Europe and Asia are also taking strides with their own renewable energy ambitions: In mid-May Belgium, Denmark, Germany, and the Netherlands set a goal of 150 gigawatts of offshore wind power by 2050. Burke says this underscores the need for the US to develop its own domestic manufacturing process, as acquiring components such as blades for wind farms will only get more competitive.

“There is a serious need for that major component manufacturing here,” Burke says. “What is really missing is that we don’t have an overarching industrial strategy to position the US as super competitive” to manufacture wind farm machinery.

Investing in people and infrastructure

In response, the US has aimed a flood of new funds, federal law, and local policies at amplifying wind power. Utility companies in the states, lured by the siren call of these actions, have begun to put their backing behind the industry. The Port Infrastructure Development Program within the Bipartisan Infrastructure Law commits $2.25 billion over the next five years to improve port facilities for commerce, reducing environmental impact, and building resilience against climate change consequences like rising sea levels and extreme weather.

At the state level, Burke says New York and New Jersey have decided to pour millions into existing or new ports with the hope that public investment now will attract private industry in the future. Without continued public and private investment, he explains, a local supply chain can’t be built at scale.

“It’s pretty incredible that offshore wind developers are already making billions of dollars of investments in some of these infrastructure projects, even when they don’t have their construction operation plans yet,” says Richer.

All of this investment should translate to a wind farm job boom in the next few years. “The tricky part is the transition from having no industry to having a robust industry. How do you get those first projects in the water, while striking that balance of as much American labor as possible, while still leveraging the European expertise to train up to the American workforce?” says Josh Kaplowitz, vice president of offshore wind at American Clean Power.

[Related: The US could reliably run on clean energy by 2050]

Though estimates vary, American Clean Power has projected more than 70,000 jobs will be created in the quest for 30 gigawatts of wind power by 2030. These construction, development, and manufacturing jobs should go to union workers, according to the Biden administration. Energy companies seem committed to engaging with unionized labor; New England developers have already signed over 15 different labor agreements for projects already underway.

Such agreements are essential to holding employers accountable on every future wind project as the industry develops, says Mariah Dignan, regional director on Long Island for Climate Job New York, a coalition of labor unions. This accountability, as Dignan explains, includes safety protections, health care benefits, pensions, and market wages. “Making sure that the domestic supply chain through and through is a union industry” will provide wind farm workers with family-supporting and community-sustaining jobs, she adds.

For offshore wind farms to become a powerhouse in the states, local labor will need to be on board. To Dignan, that means building community trust through education and outreach so that union workers in the energy business have the information and resources they need to build on the seas. If the manufacturing industry can match the speed at which wind farms have secured funding, then 30 gigawatts might just be the start of the whirling turbines that energize the US in coming years.

Correction (May 23, 2022): This story has been updated to correct the spelling of Mariah Dignan’s name. We regret the error.