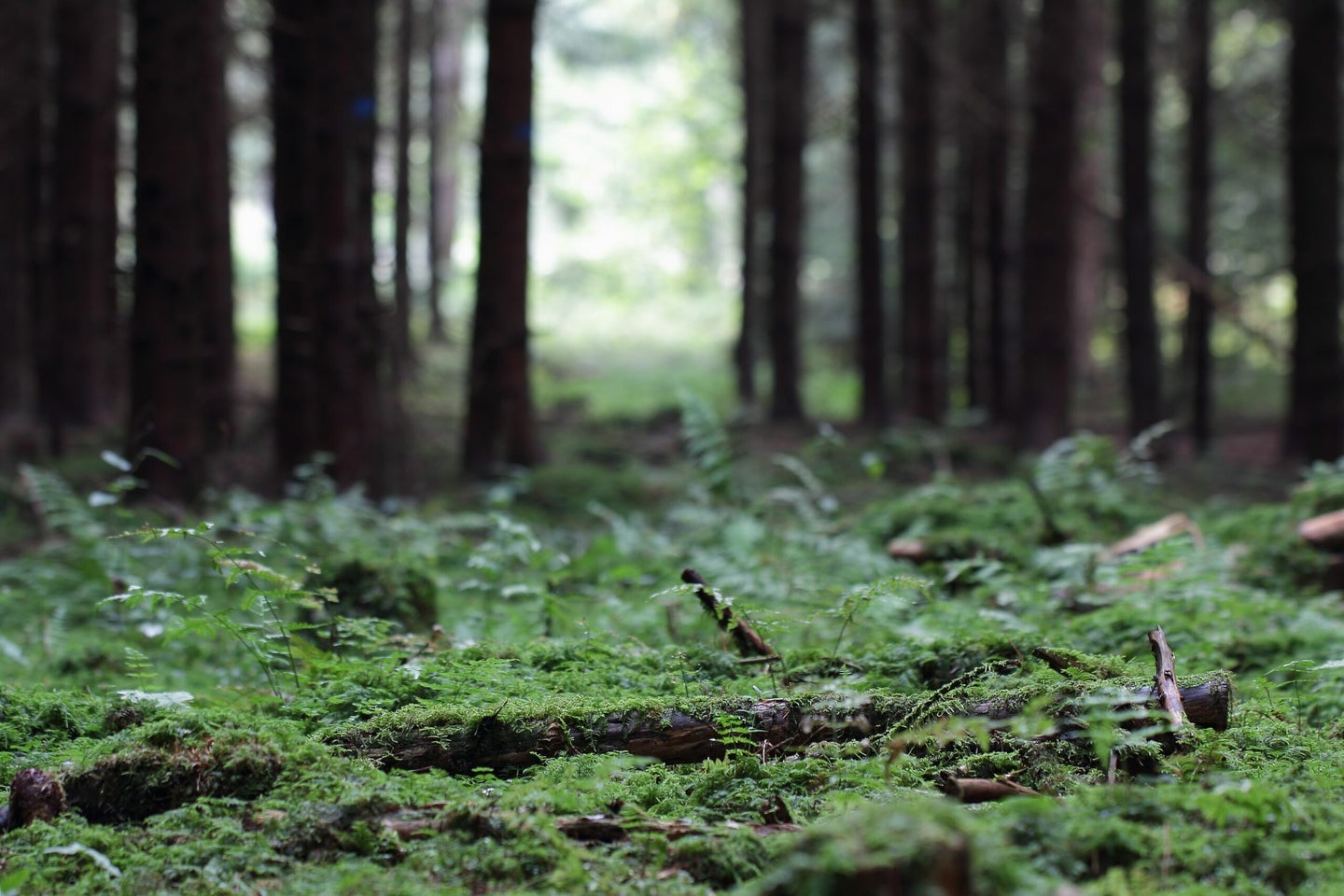 The following is an excerpt adapted from The Story of More by Hope Jahren.

Once upon a time, there was a broad and fathomless ocean. Beneath the waves swirled the currents that flushed saltwater in magnificent gushes. Deep in the dense, cold darkness, the seafloor waited with perfect patience to embrace the corpse of every living thing above

This was called the Panthalassa Sea, and I am certain that the creatures swimming in it believed their watery world to be the entire Universe, extending forever in every direction. The creatures of the Panthalassa were different from the ones we recognize in our oceans: jawless fish writhed in great schools, their wormy bodies streaming behind them as they searched for places to attach. Innumerable cartilage forms swam, forever in motion, their gill slits pumping as they moved. Spiral-shelled squids jetted back and forth, contracting and squirting their way along. Sea lilies swayed, tethered to the bottom by their roots, their animal petals filter-feeding on the small and weak that floated by.

The Panthalassa Sea was enormous—far bigger than our Pacific Ocean—but it did not extend forever. On the other side of the planet lay the Tethys Ocean, a thick, salty soup of green algae and the tiny animals that grazed upon it. Within this green slime, bubble-encased amoebas drifted from meal to meal and spongy coral sat anchored, waiting for dinner to pass through. Each tiny alga opened itself to the sun and was fertilized by sloughage from faraway mountains.

Between the Panthalassa and the Tethys there stood a vast continent, drained by rivers, pocked by volcanoes, and home to a different sort of life. Near the middle of this continent stood the Forest of Ruhr, which was altogether unlike the forests we know.

The trees of Ruhr stood thirty feet tall, crowned with fern fronds, spilling seeds from their base. Taller still stood tufted starbursts of needles atop hundred-foot trunks. None of these trees were made of wood: each one contained a hollow cavern of pith. Nor were they covered in bark: their rinds were marked by a paisley pattern of scars. Stranger still, no flowers could be found anywhere—not a one—nor the fruit that follows the bloom, nor the pollen that precedes it.

A mossy carpet lined the forest floor of Ruhr, and within it great millipedes chawed dead foliage and expectorated into the soil. Creatures strange and naked, turtles without shells, mucked their way through the fallen leaves, while dragonflies big as seagulls hovered above in the humid air. Like the sediment at the bottom of the oceans, the mud beneath this boggy forest quietly accumulated, accepting and incorporating the dead year after year, without judgment or prejudice.

The story above, for all its romance, is not a fairy tale. The Panthalassa Sea, the Tethys Ocean, and the Forest of Ruhr are all real places that existed between two hundred million and three hundred million years ago on planet Earth. There is not a drop of fiction in my descriptions, for ample evidence has been preserved in museums. There, you can wander through the history of this long-ago world, examining its stones and bones.

The Forest of Ruhr grew lush for millions of years; it was one of the earth’s first tropical rain forests. Eventually, it was buried under the accumulating sands of time. Crushed and rotted, the sludge descended into the deep, where heat and pressure transformed what had once been leaves and stems into black, blocky coal. All the while, the entire continent was pushed and pulled until its heaving journey stranded it far from home, on the other side of the globe.

Similarly, the Tethys Ocean was folded down into the earth, and over tens of millions of years, the plants and animals that had died were cooked and pressed into a rich black broth that bubbled in seeps between sandy layers, until a thick crude oil was all that remained of the life that had been. The plants and animals of the Panthalassa Sea followed a similar fate, but their oily remains were abused further, until whole molecules cracked under the strain to produce bubbles. The bubbles slid along the rock layers and merged into great pockets of natural gas.

The plant and animal corpses of the Forest of Ruhr, the Tethys Ocean, and the Panthalassa Sea now constitute the coal deposits of Germany, the petroleum crude oil of Saudi Arabia, and the natural gas deposits of North Dakota, respectively. The largest coal reserve in western Europe was once a tropical forest; the crude oil that gushes from the world’s most productive oil wells once lined a shallow ocean; the natural gas collected during today’s fracking boom once anchored a deep abyssal sea.

A fossil is everything, or it is nothing, or it is something in between. An insect trapped in amber and a dinosaur’s footprint—they both count as fossils, remnants from a time gone by. The bulk of life on land and in the ocean is plant life, and it has been for billions of years. Coal, oil, and natural gas are the pressed, cooked, and cracked remains of the plants and animals (but mostly plants) that lived hundreds of millions of years ago. All of them—solid (coal), liquid (oil), and gas (natural gas)—qualify as fossils. Because they are also flammable materials and can be burned as fuel, we know them as “fossil fuels.”

The world’s reliance on oil versus coal versus natural gas is split pretty evenly: of all the fossil fuels burned each year, 40 percent is oil, 30 percent is coal, and another 30 percent is natural gas. The reason for this has to do with infrastructure: more than 99.9 percent of motor vehicles were designed to burn refined oil, the majority of the world’s power plants were designed to burn coal, and a great part of the equipment in modern factories is powered by natural gas. Switching between fossil fuels is sometimes possible but incurs cost, as the amount of energy released, as well as the type of byproducts emitted, differs between fuel types.

Fossil fuels are also known as “nonrenewable” fuels because the amount of time required to transform living tissue into coal, oil, or natural gas is tens of millions of years at a minimum. When we pull oil, coal, and natural gas from the earth and then burn it inside our vehicles, power plants, and factories, it is not being replaced. Because it is easy to envision a world with a growing population translating into a growing use of fossil fuels, we are left wondering: How much fossil fuel is still out there?

Geology is a centuries-old science, and the last hundred years have been devoted largely to locating, mapping, and accessing the rocks that contain oil, coal, and natural gas. Based on this work, the “proven reserves” (that is, the for sure accessible deposits) of fossil fuels have been tallied and made public by British Petroleum (BP). More could always pop up—most of Venezuela’s known oil reserves have been discovered since 1980—but for the most part, the BP databases give a pretty good idea of what’s in the ground.

The world’s total proven oil reserves constitute a fifty-year supply, given today’s rate of oil use; similarly, the total proven reserves of natural gas would also last fifty years if burned at today’s rate. The world’s proven coal reserves are much larger: they would take about 150 years to burn through at the current rate of use. Of course, all of those numbers are much too high if fossil fuel use continues to increase each year, as it has done during the last several decades. Inciting panic over fossil fuels running out has never really paid off, and scientists have been accused of crying wolf since 1939, when the director of the Naval Petroleum Reserves informed Congress that America’s oil reserves would not outlast a second world war.

It is true that the total amount of known oil and gas reserves has doubled since 1980, but global fossil fuel consumption doubled right along with it. We may not know exactly when, but at some point something will have to give: there is no second Panthalassa Sea that four generations of geologists missed when they mapped the plains, mountains, and ocean floor. If we want human society to outlast the finite resource that it is dependent upon, then any movement away from fossil fuels is a step in the right direction, and one that can’t happen too soon.

Excerpted from The Story of More by Hope Jahren, published by Vintage Books. Reprinted with permission. All other rights reserved.