Simple, at-home tests can check your air and water for contaminants

There are more options than ever. 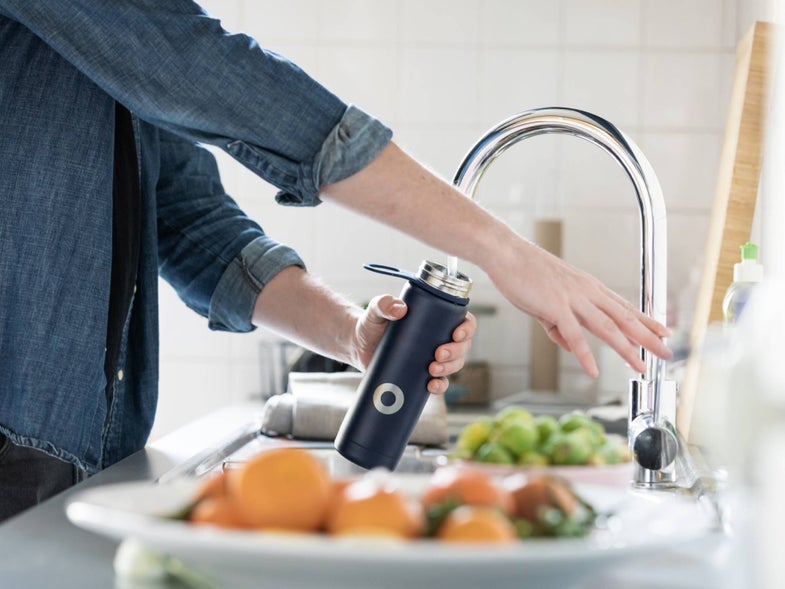 This post has been updated. It was originally published on 11/10/17.

Do you trust that your drinking water is safe? Recent surveys suggest that most Americans do, but the sentiment varies across the country. In the wake of environmental tragedies like the Flint water crisis, it’s not shocking that many citizens feel this way. Because even while the technology exists to take testing into one’s own hands, monitoring air and water quality is still generally considered the responsibility of a municipality, not an individual homeowner. Still—if you can’t always trust official promises of safety, can at-home products make up for government shortcomings?

Testing your home for contaminants can seem daunting. Some of the drinking kits that you can pick up at the store only test for one thing but not another, and they’ll never be as accurate as tests performed in professional labs. In 2017, a company called Simplewater launched a Kickstarter for Tap Score straight into that void.

John Pujol didn’t set out to create a smart water test. He and his colleagues were originally working on a low-cost method for removing arsenic from small water systems in places like Bangladesh and India, but then his mother was diagnosed with Alzheimer’s. Because the condition doesn’t run in her family, her doctor suggested looking at possible environmental risk factors, including a contaminated water supply. While Alzheimer’s doesn’t have a single known cause, researchers believe contaminants like heavy metals and pesticides—which can turn up in water—can have a role in those cases where genetic factors are not at fault. Pujol’s projects had left him well-connected to folks with water testing labs, so he sampled his family’s well.

The results were troubling.

“We found all sorts of weird things in the water—water that she had been drinking for 20 or 30 years,” says Pujol.

After that, things just clicked. The tests that existed back then tended to be black and white, geared more toward chemistry experts than your average concerned homeowner. Pujol saw the need for something more user-friendly.

“There’s definitely a need for people to be testing that water, because it has long term implications,” says Pujol. “If people could understand the results, that would make this public health issue more personal for people.”

[Related: How to test your tap water for lead]

How to test for contaminants at home

Tap Score isn’t the only company helping customers bypass traditional gatekeepers, by allowing them to better measure whether or not their immediate environment might be harming their health.

AirThings Wave is a radon gas detector designed for the home. Radon is a naturally occurring radioactive gas that comes from the breakdown of uranium. It’s found in a lot of rock formations around the country, over which we sometimes build our homes. When radon gas builds up in your house, it can cause lung cancer. There are ways of removing the gas and greatly lowering the risk of falling ill, but first a homeowner has to know that radon is there. Radon, after all, is a clear, odorless gas.

“If you look at the stats, more than six times as many people died from radon as from home fires or carbon monoxide poisoning combined,” says Øyvind Birkenes, the CEO of AirThings. While residential fires killed an average of 524 people a year between 2014 and 2018, and carbon monoxide takes 430 lives annually, exposure to radon kills 21,000 with lung cancer each year, with roughly 2,900 of those cases occurring among people who have never smoked. This number is even more stark considering that, while basically everyone is susceptible to house fires and carbon monoxide poisoning, radon exposure in this country is most likely to happen within the radon belt.

“Everyone has home fire detectors and carbon monoxide detectors,” Birkenes says. “But measuring radon is not something that’s very common.”

The traditional way of measuring radon is buying test kits that are essentially boxes of charcoal. You open them up in the home you’re testing for anywhere from 24 hours to a couple of weeks, and then mail them to a lab. The problem with this approach, says Birkenes, “is that radon levels fluctuate significantly. When you do a short-term test, you don’t know if you’ve hit a low period or a high period. Since it’s the long-term exposure to radon that’s dangerous, what you really need to do is measure radon over the long term.”

Which is what AirThings does—using a digital instrument, it measures radon levels 24/7 and can notify users via a smartphone app or a printable report on their website if levels are too high over a certain period. You can also move AirThings’ Conrentium Home around your house, which is important because radon generally concentrates on lower floors. So, your basement might have really high radon levels, but your attic might not. You won’t know for sure unless you test both spaces, which usually means multiple bags of charcoal sent in for separate tests.

The University of Michigan’s Mark Burns has also been working towards this sort of constant monitoring, but for lead. He’s developed an electronic sensor that fits onto drinking water taps, and can alert residents to the presence of lead within nine days.

“My vision is that you would have it at the tap in your kitchen, where you drank water, and maybe in the bathroom,” says Burns. “If the water in the kitchen was fine but that the bathroom wasn’t good, you’d know maybe that there was a lead line in there, or maybe somebody used lead solder when they should have used non-lead solder in one of the pipe connections.”

Burns believes that advances in electronics are to thank for this recent surge in at-home test options, along with the ability to share, store, and retrieve information brought to us by the internet. And they might be worth a look even if you don’t live in deep distrust of your municipal services.

“Many of these measurements would be almost impossible for a city or town to do, because they’d have to test people’s water almost daily. It’s just not practical to do that,” Burns says. “But the individual consumer now has the power to do that for themselves.”