Foreign investors in the region have a responsibility to help safeguard local activists. 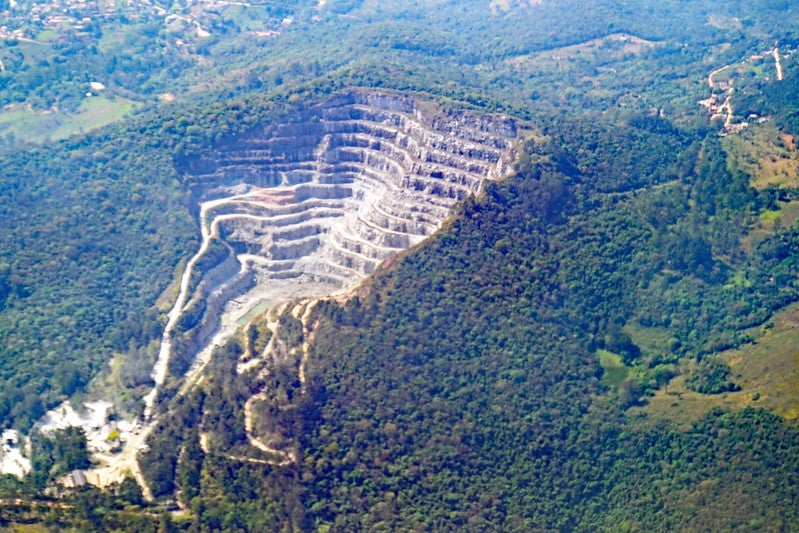 Many open pit mines in the Brazilian Amazon are owned and run by North American companies. Dennis Jarvis/Flickr CC
SHARE

This op-ed originally featured on Undark. Martha Pskowski is an independent journalist and M.A. candidate in Latin American and Caribbean studies at New York University. She has reported on environmental issues in Mexico, Guatemala, and El Salvador.

In 2008, Mexican activist Mariano Abarca was assaulted by employees of a Canadian mining company, Blackfire Exploration, at his home in Chicomuselo, a municipality in the state of Chiapas near Mexico’s border with Guatemala. The attack was presumably retribution for Abarca’s vocal opposition to the planned expansion of Blackfire’s nearby barite mine.

In July 2009, after he had received multiple death threats, Abarca joined a delegation to the Canadian embassy in Mexico City, where he gave a speech describing how Blackfire used its workers as thugs. Just four months later, in November, he was shot dead in front of his home. Witnesses identified a former Blackfire contractor as the shooter, and at least two other Blackfire workers were arrested or detained in connection to the crime, according to a report sponsored by labor and environmental advocacy organizations. Earlier this year, a federal court in Canada denied a request from Abarca’s family for a review of the embassy’s failure to help him. (The family has appealed the decision.)

Stories like Abarca’s are all too common in Latin America. A report by Global Witness, a nonprofit human rights organization, found that in 2018, Latin America was the world’s most dangerous region for environmental activists, accounting for more than half of the 164 environmental defenders murdered that year. In Guatemala alone, 16 people were killed for defending their land or the environment, making it the most dangerous country per capita. Mexico and Honduras were also in the top 10.

What these countries have in common is that they are home to billions of dollars of investments from American and Canadian mining and extraction companies. Activists—many of them indigenous people—who speak out against companies’ exploitation of the land, forests, and water do so at considerable peril, and with few protections from their national governments. Investors and companies in the US and Canada have done little to ensure that their money isn’t driving criminalization and attacks on local advocates. Until the companies take clear steps to prevent the violence, they are complicit in—and benefit from—the weak rule of law in their partner countries.

Protecting activists from violence would be a small price to pay, considering the windfalls that Canadian and U.S. businesses are reaping in Latin America. Of the large mining companies in Latin America, 41 percent are Canadian. The US, meanwhile, is the largest single source of foreign direct investment in Mexico and Central America, with many of those investments going to the natural resources sector. These massive investments don’t always generate significant revenue for the host country. For example, in Guatemala, foreign companies operating nickel mines are required to pay taxes equal to just 1 percent of the revenues from their unrefined ore.

Foreign investments have repeatedly been linked to deadly attacks on environmentalists. In Guatemala, where indigenous Xinca people have long protested the Escobal silver mine, at least three mine opponents have been killed in recent years. (The Escobal mine was owned by the Canadian company Tahoe Resources, before being acquired by Pan American Silver, also based in Canada, in February 2019.) The murders remain unsolved and Tahoe denied any responsibility. But family members of victims like Topacio Reynoso, who was just 16 when she was killed, say the mining company sowed deep divisions in the community that escalated into violence.

Similar situations have unfolded in the Yaqui community of Loma de Bácum, Mexico. The community lies along the planned route of the Aguaprieta pipeline, which is being built by IEnova, the Mexican subsidiary of California-based Sempra Energy, to carry natural gas from the US to the Mexican states of Sonora and Sinaloa. The Yaqui community has fiercely opposed the project. In December 2016, the community’s lawyer Anabela Carlón Flores, who is herself Yaqui, was briefly kidnapped and pressured to withdraw an injunction against the pipeline construction. Other women in Loma de Bácum who’ve spoken out against the pipeline have also been threatened.

The Mexican and Guatemalan governments have a responsibility to prevent these crimes. But all too often they are unwilling or unable to investigate the wrongs committed against environmental defenders. The few safeguards that exist in these countries have proven inadequate. The United Nations-backed International Commission Against Impunity in Guatemala, established in 2006, made strides in investigating corruption, including in extractive industries. But President Jimmy Morales cancelled the commission’s mandate in January 2019, and it ceased functioning in September.

In 2012, Mexico established the Mechanism to Protect Human Rights Defenders and Journalists. Among other things, it provided journalists and activists with police protection and panic buttons that could be used in emergency situations. But people enrolled in the program say the panic buttons often malfunction and the police officers assigned to protect them commonly shirk their duties. The mechanism failed to protect Julián Carrillo, a Rarámuri activist who was killed in October 2018 by unidentified assailants, despite being granted official protective measures.

Worse still, in countries like Brazil, the federal government is openly hostile to land defenders. As documented by Global Witness, land defenders throughout Latin America are increasingly being charged with crimes like terrorism and property destruction. The same national governments that criticize and criminalize activists cannot be entrusted with protecting them.

When governments don’t protect land defenders, companies that invest in those countries have a responsibility to address the violence. Although some people might argue that murders of environmental defenders are rare and that foreign companies shouldn’t be punished for the actions of a few bad actors, impunity for these crimes creates a chilling effect for all activists—even when murders are not directly linked to U.S. or Canadian investments.

Take the case of the Rarámuri land advocates in the Sierra Tarahumara region in Chihuahua, Mexico. Several indigenous activists, including Carrillo and Isidro Baldenegro López, a 2005 recipient of the prestigious Goldman Environmental Prize, were killed after standing up to criminal organizations that traffic drugs and illegally harvest timber in the area. Those acts of intimidation discouraged some Rarámuri people from speaking out when the energy company TransCanada began building a natural gas pipeline through the area.

Indigenous activists also face steep barriers to accessing the justice system. Mexico’s indigenous people are routinely discriminated against in the country’s courts, and Mexican journalist Laura Castellanos found that in the past decade, two thirds of deadly attacks on land defenders in Mexico were against indigenous people.

One bright spot for activists is the Escazú Agreement—created in 2018 and now signed by 22 countries in Latin America and the Caribbean—which commits to protecting people who defend the environment. Now, the foreign companies who invest in those countries need to catch up. Freedom of speech doesn’t exist if you are afraid your views will get you murdered, and responsible foreign investment can only take place when local communities feel free to speak their minds about development projects in their territories.

Important first steps that companies and investors can take include establishing clear lines of communication with local communities and a straightforward grievance process. Companies and their local subsidiaries must go further to weed out corruption and bribery when developing their projects. Ensuring that indigenous communities give free, prior, and informed consent for development projects—as stipulated in the United Nations Declaration on the Rights of Indigenous Peoples—is an important precursor to avoid conflicts. The governments of the US and Canada also have roles to play.

There is ample evidence in Latin America of violence toward environmental defenders—and of local governments’ complicity in that violence. Companies and investors can either confront the problem or continue to be a part of it. Waiting for states to act is not enough.