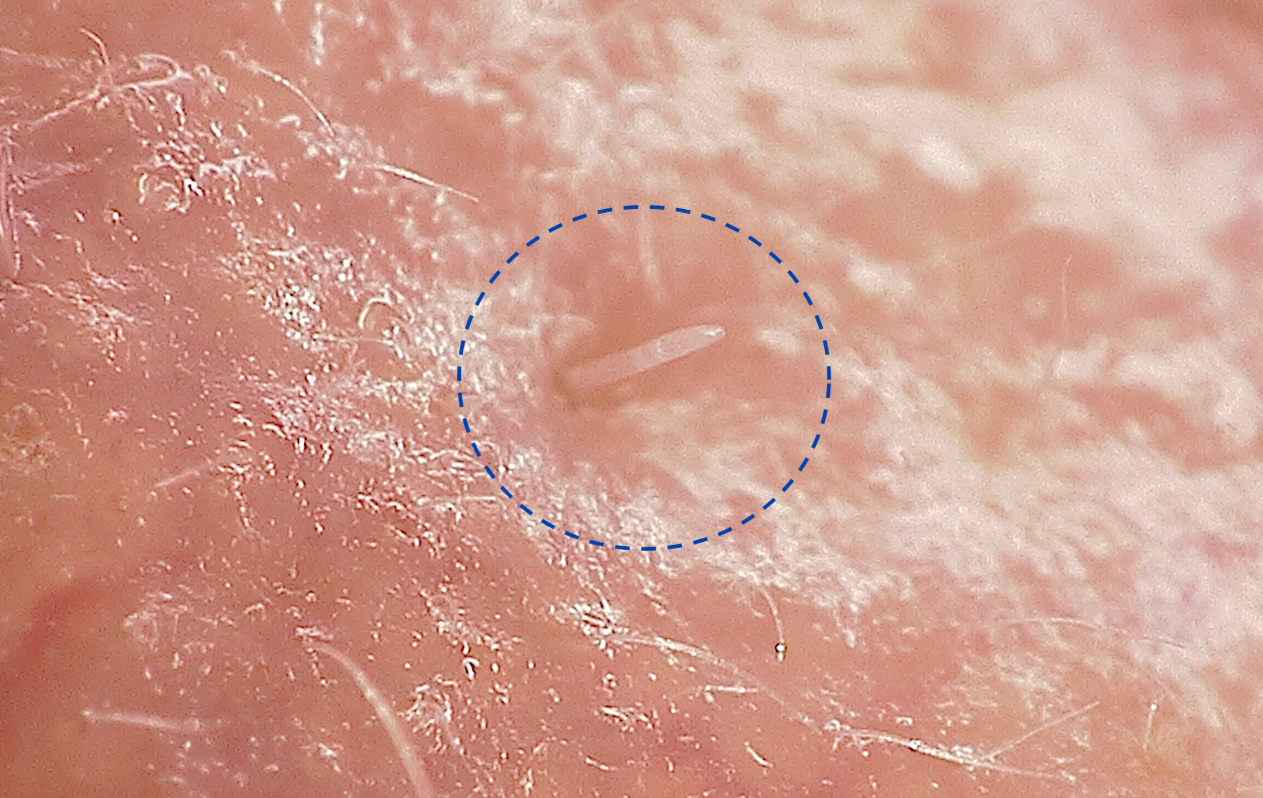 Your skin pores are nice roomy homes for these microscopic arachnids. University of Reading
SHARE

There’s a little something crawling on your face. Don’t worry, it’s not a spider—but it is another type of arachnid. Nestled all cozy in your pores are your very own face mites. These itty bitty arthropods, no more than 0.3 millimeters in size, like to cuddle with your hair follicles. Before you start to panic, these microscopic mites have harmlessly existed on your skin since you were a baby. In fact, researchers like invertebrate biologist Alejandra Perotti suggest that they actually help unclog oily pores and clear away dead skin cells.

“They don’t cause any damage,” says Perotti, associate professor at the University of Reading. “All people with healthy skin carry the mites. We should love them and care for them.”

And now, genetic research is giving a new glimpse into the lifestyle and adaptations of our most intimate neighbors. Published this week in the journal Molecular Biology and Evolution, co-lead author Perotti and a team of biologists completed the first ever genome sequence of Demodex folliculorum, one of two species of skin mite that is present on more than 90 percent of humans.

“So very little is known about face mites,” says Michelle Trautwein, an assistant entomology curator at the California Academy of Sciences who was not involved in the study, in an email. “This study is an exciting advance in our understanding of an animal that lives on all of our faces.”

Nearly all mammals have skin mites. There are about 150 described species in the genus, each with specific mammalian hosts. Two species are specific to humans, including D. folliculorum, which are passed on from mother to offspring. As a human reaches adulthood their pores grow, giving more room to house greater numbers of these arachnids. While the mites are often concentrated on the face, they’re also found in hair follicles on nipples, eyelashes, ears, nose, and genitals. They’re known nocturnal creatures: While you sleep, they emerge from their greasy wells to mate on the surface of skin.

Very few skin mite species have had their DNA sequenced, explains Perotti. Because of their microscopic size and their close proximity to human skin, specimens can end up with a mix of bacteria and human DNA, Trautwein said in a 2019 interview with Science Friday. But the team was able to collect and isolate about 250 mites for the study. And the genome sequence revealed that our face mites are losing genes.

Face mites have lost the need for certain traits as they’ve adapted to human pores. The genes responsible, such as UV protection which is a feature that isn’t necessary if burrowed inside pores during the daytime, become obsolete and are shed from the genome as a consequence. The mites also don’t have the ability to produce melatonin, the sleepytime hormone produced by and metabolized in human skin. The mites might be getting enough melatonin through the protective pores, says Perotti, which enables them to stay awake during their nocturnal mating.

“The moment you don’t use the gene, you lose it,” says Perotti.

Inbreeding also impacts face mite populations. A face mite population starts with a few founder individuals before reaching more than a million on one person. As the face mites continue to mate and breed over time, “the genetic diversity in that population becomes quite reduced,” Perotti says. This small gene pool and the loss of genes, including DNA repair genes, could spell trouble for the mites in the future. “We find a pattern of losing so many genes that they go towards an ‘evolutionary dead end,’ so they will disappear at some point if they don’t manage to recover,” says Perotti.

The extensive genome reduction is an indicator that the mites are in the middle of shifting their external parasitic relationship with humans to a more obligate internal symbiotic one. In this scenario, mites gradually merge with our bodies in a mutually beneficial, fully co-dependent relationship, says Perotti. For now, the mites remain on the surface as unimposing, if not helpful, residents cleaning and unclogging our pores—contrary to popular belief, Perotti says.

Face mites are commonly attributed to certain skin diseases and inflammation, like rosacea. Perotti says that many of these claims and fears are misconceptions that link back to the face mites’ anatomy—or rather lack of anatomy. It’s previously thought that the mites lack an anus, leaving some to predict that they must excrete waste by another unidentified method. However, the more popular theory goes that the mites hold in all their feces across their lifetime, leaving behind an explosion of excrement upon death.

“This is totally wrong,” says Perotti. In fact, the anus of the mites was described through electron microscopy in the 60s, she adds. In the new study, the team showed the development of the digestive system and highlighted the hindgut opening, setting the record straight: Face mites do have an anus.

“The discoveries about face mite anatomy were my favorite part of this study,” wrote Trautwein. “Glad they cleared that up. Apparently the face mite anus is just very hard to find.”

Other studies and dermatologists continue to point fingers at face mites as one of the triggers of certain skin conditions. Medical sources often cite that an abnormal abundance of them can cause skin problems. Trautwein says more research is needed to fully understand when and how the mites play a role in human disease.

Perotti says that it’s important to further investigate and protect the diversity of the little residents on our faces. Besides, no amount of face-safe washing, scrubbing, or product can get rid of these tiny grease gobbling friends. We might as well embrace them.

“I hope that people start thinking of them like a part of their bodies,” says Perotti. “They should respect them like any other animal.”