And it almost became a piece of jewelry 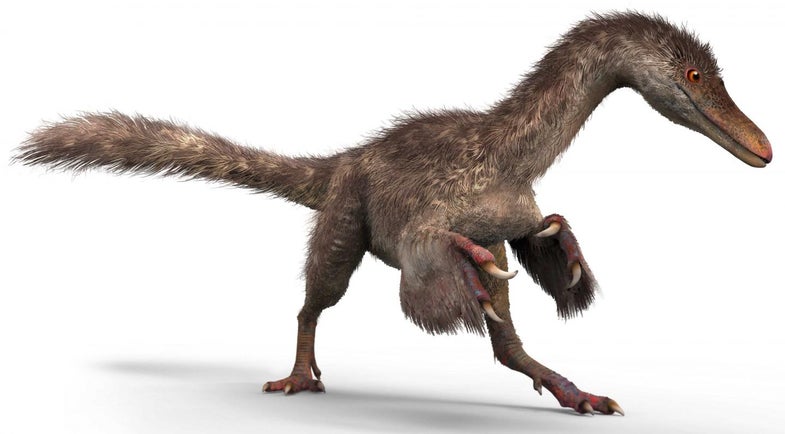 Getting trapped in sticky tree resin is a bad way to die. But if you’re a paleontologist, that nasty death is a gold mine (or amber mine) of information.

A dinosaur tail covered in tiny, fragile feathers survived a 99-million-year stint in amber only to be hacked off by miners. It was sitting in a market in Myanmar, set to be sold and made into jewelry, when a paleontologist spotted it. Bird feathers in amber are valuable for their aesthetics, but dinosaur feathers are another matter.

As a paleontologist, Lida Xing knew that dinosaur feathers rarely get preserved. The rare specimens can tell us what prehistoric feathers were like and how they evolved. And this particular specimen contained bones and soft tissue as well as preserved feathers, making it especially rare and useful. Xing and his colleagues examined it using CT scans and microscopes, publishing their findings this week in *Current Biology *. It’s a fairly complete tail of a baby theropod (about the size of a sparrow) that lived in the mid-Cretaceous period. Here it is munching on a bug:

Scientists already know that dinosaurs had feathers, and this isn’t the first time that they’ve been found in amber. This same team published an analysis of two ancient bird wings with feathers similar to modern flight feathers. Like the tail, those wings were a rare find––few feathers can resist decomposition.

Feathers can occasionally make impressions in a fossil, but otherwise can’t withstand the forces of nature over millennia. This is why amber is so valuable to scientists. Amber is the beautiful result of ancient tree resin becoming fossilized. As it dries, it can trap insects and small animals inside and prevent delicate body parts from decomposing.

The tail feathers on this baby dinosaur were especially delicate, because they don’t have the hard structure that we associate with flight feathers. They’re more like the short, downy feathers found on turkeys when they haven’t been fully plucked. That suggests that the tiered branching pattern on feathers evolved earlier than the stiff central shaft did.

Even though the feathers look like a bird’s, researchers know that this tail came from a baby dino because of the way the vertebrae are aligned. They’re not fused the way modern bird vertebrae are, but separated such that the tail could bend.

More complete amber specimens could tell us a lot more about prehistoric animals, so scientists are keeping a trained eye on the Burmese amber mines. Pendant necklaces mined in the area are certainly gorgeous, but to researchers they could be priceless.