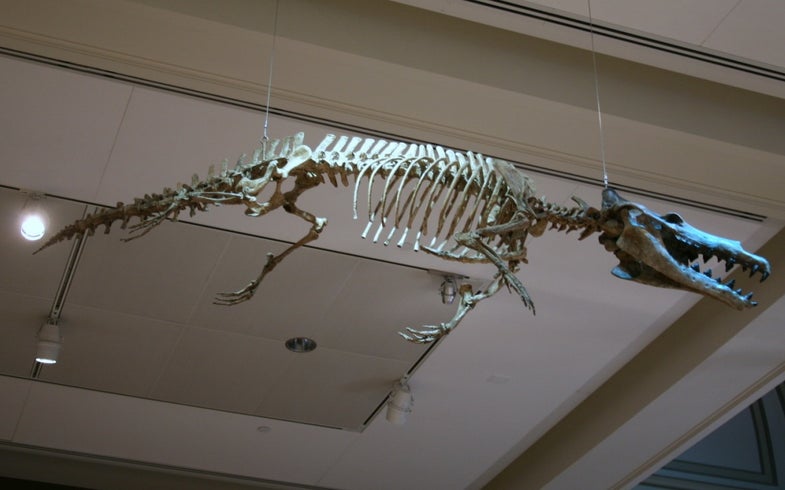 A Virginia brewer soon plans to serve a beer made from yeast found hanging out on a 40-million-year-old whale fossil, the blog Symbiartic reports. Depending on your disposition, I imagine you’re reacting in one of two ways right now, “Yecchh!” or “Cool!”

The beer will be called Bone Dusters Paleo Ale (Hardy har har [Okay, actually, “paleo ale” is pretty good]). The yeast come from the surface of one of the oldest marine mammal fossils ever discovered in the western hemisphere. The idea for the beer came from Jason Osborne, who co-directs a nonprofit dedicated to advancing paleontology and geology. A paleo beer, Osborne thought, would be a great hook to interest non-scientists in fossils. I think many non-scientists are quite interested in fossils already, but I cannot argue against a paleo beer.

Will whale-fossil beer really taste that different from other brews? Perhaps not. The species of yeast Osborne and his brewing partners found on their fossil was the same species that commonly goes into beer, bread and even scientific studies. The yeast’s scientific name is Saccharomyces cerevisiae. The whale-fossil S. cerevisiae might have drifted over from another lab, if there was a yeast lab nearby. Scientists consider such yeast domesticated, like dogs and sheep are. Like pets and livestock, people have bred and worked such yeasts for thousands of years.

Wild Saccharomyces cerevisiae also exist, however. This 2005 study found that wild S. cerevisiae live in fruit and mushrooms and in liquid exuded from oak trees. Maybe the paleo ale’s yeast came from somewhere out there in the wild world. If so, it might be interesting. The study found that wild Saccharomyces cerevisiae have greater genetic variation than the yeasts that are associated with human breweries and human labs.

We cannot tell. Perhaps you can. Bone Dusters Paleo Ale will soon be served at the taproom of the Lost Rhino Brewing Company in Ashburn, Virginia, Symbiartic reports.