It might well be related to a very common modern lizard--except it's teeny-tiny. 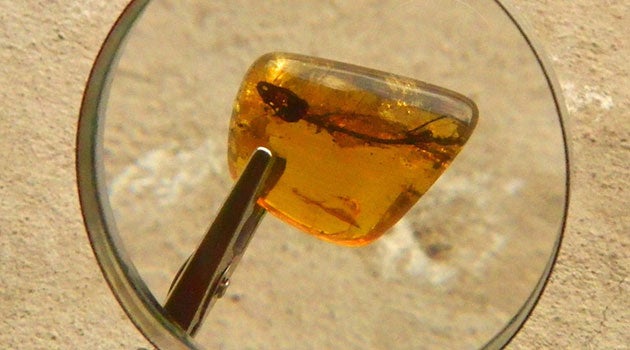 In Chiapas, Mexico’s southernmost state, paleontologists discovered a small piece of amber with something remarkable inside: a 23-million-year-old preserved lizard.

Scientists at the curiously named National Autonomous University of Mexico’s Physics Institute are analyzing the amber. It’s small, loosely trapezoidal in shape, and only about 1.7 inches by 0.5 inches, but contains the entire body of a very tiny lizard. Thanks to the amazing preservation powers of amber, the lizard’s complete skeleton survived to this day, along with a not insignificant amount of soft tissue and even skin.

It’s a bit early to declare with certainty what kind of lizard this is, but the scientists believe at this point that it’s a new species of anole. The anoles are a very common New World family of lizards–if you’ve been to Florida and seen greenish/brownish lizards running all around, those are most likely anoles. They’re friendly lizards, functioning as a sort of pest control (they eat cockroaches, for example) and are even sold as pets, sometimes. This particular preserved (presumed) anole has yet to be given an official Linnaean name.

The amber was found in Simojovel, a municipality in the northern part of Chiapas that’s known, among other things, for its amber. Amber is a fossilized resin, not a sap; though both sap and resin come from plants, sap is a sugar and resin is a complex hydrocarbon liquid that’s held in the outer cell membranes of plants. Both sap and resin are thick, viscous liquids, but only resin can fossilize and become amber, often with organic matter (like plants or animals) stuck inside. Simojovel has a long history of amazing amber finds, and this lizard is only the latest.