What to do if you test positive for COVID, were exposed, or have symptoms

Here's why the CDC changed its guidelines. 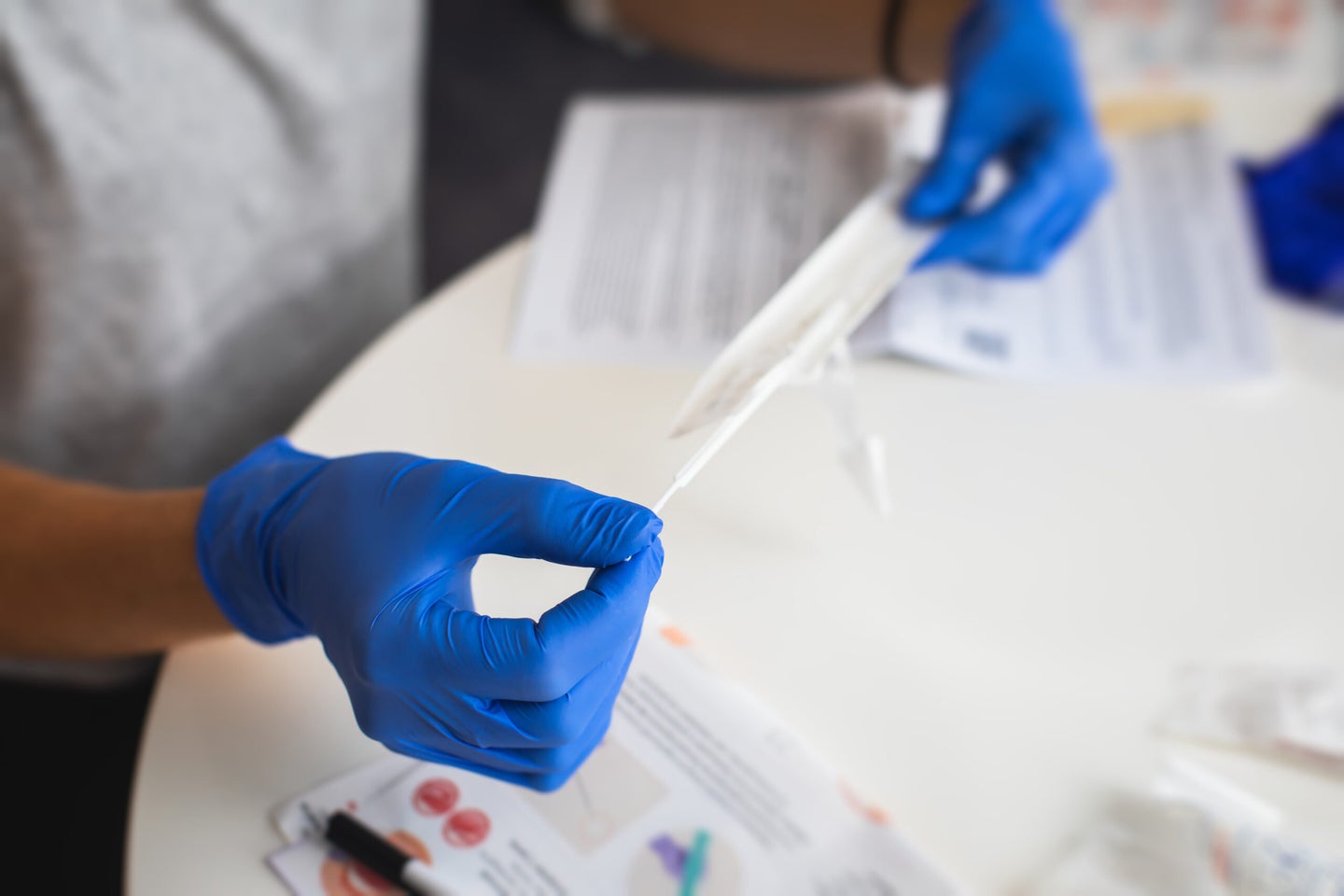 This past week, the CDC issued new guidelines—for the first time since July 2020—on how to isolate and quarantine for COVID-19. The guidelines cut in half the recommended isolation time for anyone, vaccinated or not, who doesn’t show symptoms.

CDC director Rochelle Walensky said on CBS that 90 percent of COVID transmission takes place in those first five days. And with Omicron causing a tidal wave of relatively mild COVID cases, the agency argues that the step is necessary to avoid de facto lockdowns when millions of people isolate at once. With the expiration of mandatory paid leave and financial support for businesses, isolations and lockdowns can be financially devastating. The CDC has also expressed concern that fire departments and emergency medical services will be unable to respond to calls.

But many infectious disease researchers are skeptical, or outright disapproving of the recommendations, arguing that the CDC should have gathered more data before loosening the guidance so dramatically, or should have included more guardrails, like rapid testing.

“My concern with the new CDC guidance is that it doesn’t differentiate between breakthrough infections vs. infections in unvaccinated people,” wrote Saskia Popescu, an epidemiologist who studies biosecurity at George Mason University, in an email to Popular Science. (Vaccinated people appear to clear infections faster.)  “We’re also still learning more about Omicron and it’s simply too early to say we feel confident reducing isolation across the board in the face of this current surge and variant of concern.”

Susan Butler-Wu, who studies and directs COVID testing at the University of Southern California Medical Center, agrees. She says that while a five day isolation might not necessarily be a problem, it needs to be layered with other precautions, like clear guidance on mask wearing and the use of rapid tests during isolation. “We need better masks. We need access to rapid testing, and we need education to folks on how to use them,” she says. “We know we need to combine the things to be successful and I feel like we’re paring back for this month.”

It’s also clear that the CDC was receiving requests from big businesses that wanted to bring their employees back to work. But not everyone will have the choice to take those precautions. A risk, says Butler-Wu, is that employers will use the relaxed guidelines to pressure employees to come back to work, even if they don’t feel safe doing so.

“I don’t know how much agency people will have on an individual basis to turn around and say to their employer, I got a positive antigen result and feel kind of crap, although I feel better than yesterday,” says Butler-Wu.

To top it all off, the guidelines themselves are still complicated. We’ll start by laying them out. Then, we’ll explain their limitations, and how you might think about them in your own life.

[Related: It’s too early to dismiss Omicron as a mild COVID variant]

So what to do if you’re positive?

If you test positive for COVID-19, the CDC now recommends that you isolate for at least five days, no matter your vaccination status. If you’re asymptomatic at the end of that period, it recommends that you end isolation without a test. Here’s how it works:

You tested positive, but don’t have any symptoms

This means you likely have an asymptomatic case, and while you might feel fine, you have the potential to spread it to others. Day one is the first full day after your first positive test. You should isolate yourself at home until day 6. (See the CDC website for more details on what that means if you share your home with others.) Then, the CDC advises you to wear a mask around other people at all times for another five days.

You developed symptoms and then tested positive

Day one is your first full day after you started feeling sick. If by day 5, you no longer have symptoms, or your symptoms are “resolving,” the CDC guidance says that you can end isolation as long as you mask around other people for the next five days.

Unfortunately, symptoms that are “resolving” is a completely subjective measurement, and the CDC didn’t respond to questions from Popular Science. The press release accompanying the guidance indicates that resolving means “without fever for 24 hours,” but many people-—particularly the vaccinated—may have a symptomatic infection without fever.

It’s also not entirely clear what you should do if you do have symptoms on day five. The guidance says “if you have a fever, continue to stay home until your fever resolves.” Presumably you should do the same for other symptoms, with the exception of loss of taste and smell, which the CDC has consistently said can linger for weeks or more after infection.

Unfortunately, your clock starts over if you develop symptoms. Day one is your first full day after you start feeling symptoms. From there, follow the steps for a symptomatic infection above.

What kind of mask?

The CDC doesn’t give much guidance. But it’s abundantly clear by now that N95s and their international siblings (KN95, etc) are better filters than surgical masks, which in turn provide more protection than cloth masks. “Have a good mask,” says Butler-Wu, “ideally an N95.” If you don’t have access to that, use the best option that’s available to you—cotton covering a surgical mask is better than either on its own. As long as you’ve got a better mask, now isn’t the time to go out wearing a thin synthetic.

[Related: Which at-home COVID-19 test should you buy?]

What to do if you were exposed

If you spent more than 15 minutes within six feet of someone who was positive, you’re supposed to quarantine, (more details below) either until you develop COVID or are confident you don’t have it. Of course, it’s hard to estimate times and distances in the course of everyday life, and Omicron is much more infectious than previous variants.

So unless your interaction was brief, outdoors, and masked, it’s probably better to treat it as an exposure. (Though it should be recognized that quarantine can put different burdens on different people—if in doubt, follow your local health department guidelines.) Here’s how the CDC now recommends you quarantine.

The CDC recommends that you wear a mask whenever you’re around other people for 10 days. If you develop symptoms, get a test and begin to isolate. If you don’t develop symptoms, wait five days from the exposure to get a test, because it may take a few days for an infection to build enough to register as positive Based on previous guidelines, it appears that if that test is negative, you can end quarantine.

You’re not vaccinated or not fully boosted

Quarantine at home for five days. On day five, get a test. If it’s negative, you can leave your house, but wear a mask when you are around other people. If you start to feel symptomatic, get a test and isolate until you know the results.

While researchers were beginning to agree that the previous policy—10 day isolation periods—was probably overly cautious for fully vaccinated individuals, there were intermediate steps between that and halving isolation periods for all adults.

There are a few challenges in writing rules for the end of isolation. One is that there is no direct test for infectiousness: How infectious a person is depends on a mix of social factors and a person’s specific COVID case. Another is that we understand the onset of a COVID infection more clearly than its tail end. Yet another is that Omicron appears to move through cells and through the body with a different pattern than previous variants, and we don’t yet know what that pattern looks like.

Still, proxies for infectiousness give us some clues. In a study of NBA players during the “bubble” season last year, vaccinated players appeared to clear their systems of viral material an average of two days faster-—5.5 days after peak. That suggests that rules could be looser for vaccinated people.

Among the only evidence so far on the speed of Omicron infections is a CDC study on a six-person family, five of whom were infected with Omicron. In that study, the virus moved from initial infection to symptoms in three days, much faster than in previous variants. (A study in Norway found a similar result at a 111-person party.)

But we don’t yet know if that means the infectious period will be shorter. Butler-Wu points to several findings suggesting that plenty of people carry live virus in their systems well after developing symptoms—as many as 20 percent had live virus a week later in a study from the UK. Based on that, it might make sense to have isolation last a few more days.

And, she says, it’s not clear that the resolution of symptoms is linked to less virus. The implied logic of the CDC’s decision, she says, is that your symptoms are resolving, therefore you have less virus. And there’s no data to say that. We see people with viral loads that are off the charts that have mild infection or even asymptomatic [at the end of infections].”

One way to reduce that risk would be to ask people to get a negative rapid test to leave isolation. (PCRs continue to return positive results for as long as three months.) That could be a tall ask given the price and scarcity of the tests, and Walensky has said that the CDC decided against it because “we don’t know how [rapid tests] perform with regards to predicting transmissibility towards the end period of infection.” Still, as Butler-Wu noted, screening out the people who have enough virus to test positive could provide another layer of security.

So if you want to be more careful—maybe you’ve got an unvaccinated child around, or an elderly relative—here are some options. “I encourage folks who have asked me to ensure if they’re going to end isolation early per the new guidance, they do a rapid test (negative) and make sure they are wearing a high-quality mask and reducing social interactions,” says Popescu. That includes not eating around others. You could also follow the British model, and isolate for seven days, followed by two rapid tests a day apart. And no matter what, get a better mask.