How Arjun Raj Reveals The Inner Workings Of Cells

Raj and colleagues at the University of Pennsylvania invented a technique for tracking how a cell's genes are expressed. 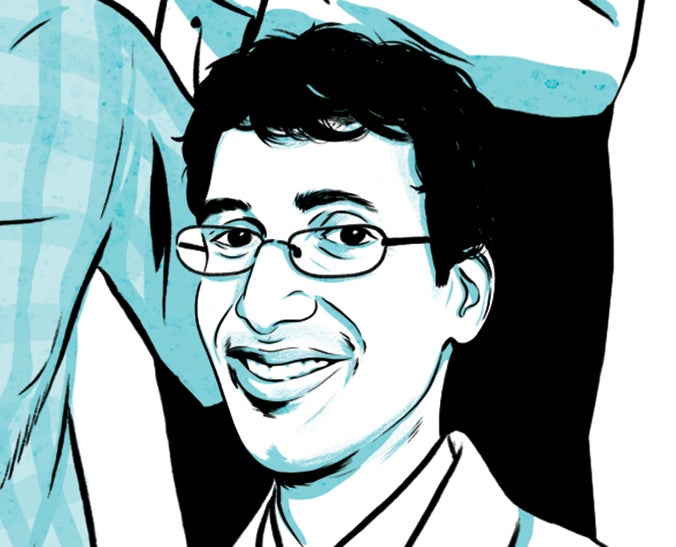 Revealing the inner workings of cells

Each cell in your body has the same DNA. But how a cell’s genes are expressed—and how frequently—determines whether the cell will become a neuron or a cardiac myocyte or whether it’s healthy or sick. Arjun Raj and his collaborators at the University of Pennsylvania invented a technique to track that gene expression and its effects.

Just as grocery store receipts show which foods are most popular, RNA molecules, which carry genetic information from DNA, reveal which genes are turned on and how often they’re active. To track a specific RNA strand, Raj bathes a cell with segments of fluorescent DNA. Those segments bind the RNA in different locations, lining up along it like Christmas lights along a roof, and are clearly visible through a microscope.

Using this technique, Raj found that genetically identical cells don’t necessarily transcribe genes at the same rate. In some, maternal genes are more often transcribed than paternal ones. When a chromosome gets chopped into several pieces and reassembled, as often happens in cancer, even undamaged genes are expressed at different levels than in a normal chromosome. Raj also discovered that in genetically identical worms, varying levels of gene transcription could mean the difference between a long life and an early death. “What I find really exhilarating is that we just don’t know what we’re going to see,” Raj says. But now that cell biologists can see these subtle events, they can begin to study why the events happen.