The hottest entertainment innovations of 2021

We needed distractions more than ever this year, and these devices helped provide it—each earning a spot among the Best of What’s New. 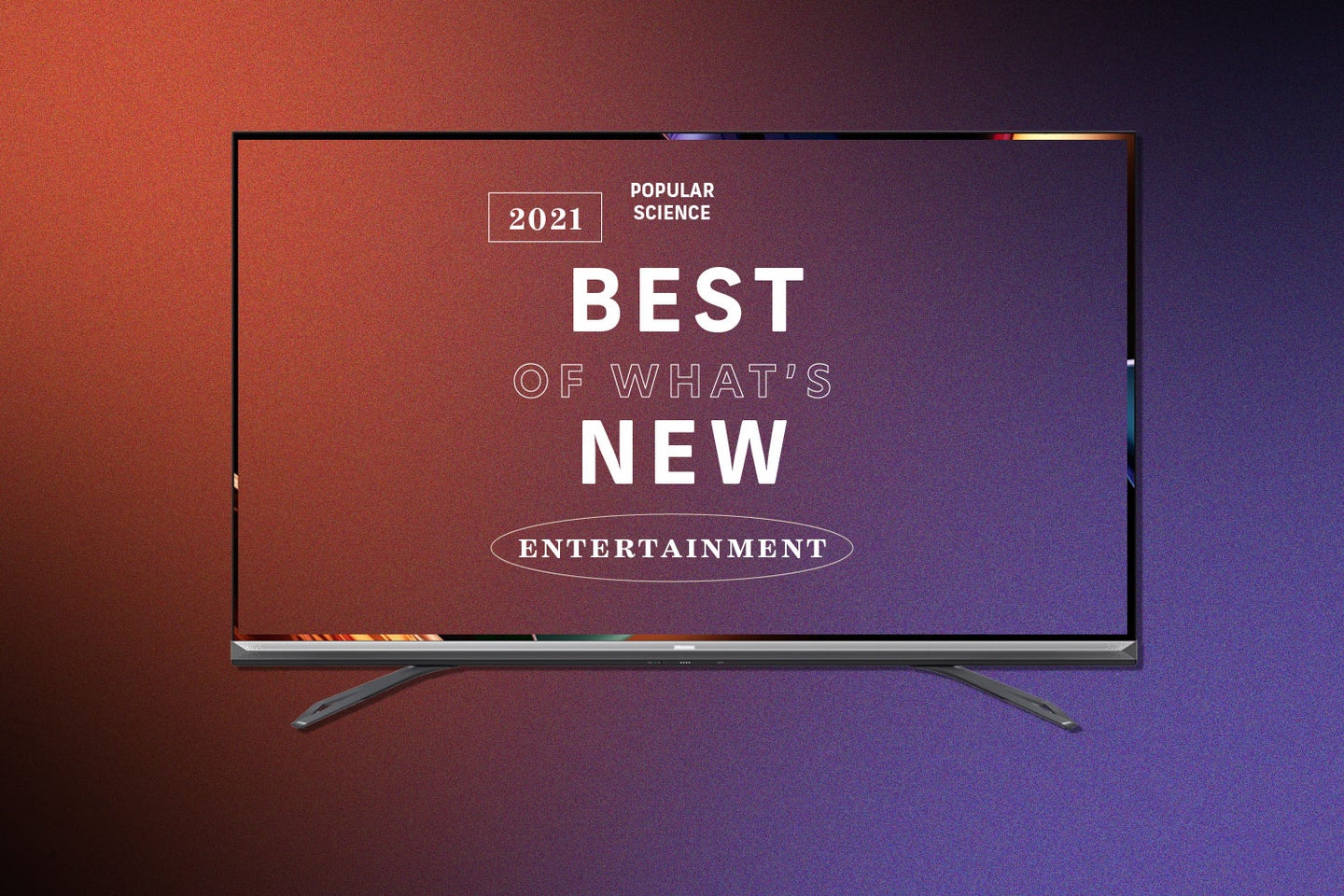 It’s been a banner year for enjoying high-end content at home. Many of the biggest blockbusters debuted on streaming services like HBOMax and Netflix at the same time they showed up in theaters. Those big-budget flicks make us crave new TV tech, and this year met the challenge with two impressive new screen schemes. In music, several of the largest streaming services started offering spatial audio, which adds an impressive 3D effect to tracks, and Sony answered the call with a new portable speaker. And of course, there are also plenty of new content creation tools, like Shure’s broadcast-quality USB microphone and Panic’s black-and-white-only handheld game system, which is every bit as innovative as it is adorable.

Since the dawn of flatscreen TVs, most displays have relied on an LCD panel with colored filters in front of a backlight to create the pictures we see. Manufacturers have done some truly impressive things with this same basic setup, but the tech’s ever-present glow is not great for producing deep, inky blacks that maximize contrast and make the image really pop. That’s because the light can bleed through the LCD panel where it shouldn’t. In order to solve this problem, Hisense developed a simple, but ingenious, solution that adds another layer called a luminance control panel. In addition to the typical 4K LCD panel, a second 1080p LCD layer creates an extra barrier to stop bright areas from bleeding into the shadows. As a result, Hisense squeezed roughly 40 times more contrast out of this TV than it could on a typical screen. It even boasts brightness advantage over pricier OLED sets that can sometimes suffer from screen-ruining burn-in after heavy use.

This adorable little console looks like a chubby Game Boy. Panic’s lo-fi device even has the monochrome, non-backlit screen which harkens back to Nintendo’s handheld. Playdate’s simplicity makes it the antithesis to the brightly-colored eyeball onslaught and microtransactions that can make smartphone games feel like a grind. The gadget uses built-in WiFi to download new games—two per week for 12 weeks keep things fresh. Future titles will be part of release “seasons,”  and Panic plans to release a free SDK so anyone can make their own games. Some titles require the crank on the side, which adds a unique tactile element to the experience.

A high-end gaming PC in a handheld

With a 7-inch, 1,280-by-800-pixel screen nestled between two sets of controls, Valve’s handheld looks reminiscent of a Nintendo Switch. In reality, though, the Steam Deck is a full-on, portable gaming PC that can run even the most power-hungry titles from Steam’s online catalog. Valve teamed up with PC hardware maker AMD to create a custom CPU and GPU to handle the computing demands that come from AAA titles like Red Dead Redemption 2 or Team Fortress 2. It also comes with 16 gigs of RAM and super-fast SSD storage on-par with what you’ll find in the latest generation consoles.

Rather than relying on light sources around at the edges of the TV, displays with a feature known as local dimming tap arrays of LEDS directly behind the panel. This gives screens much better control over contrast and detail. Samsung’s Neo QLED line uses teeny tech to amplify that potential. Its miniature versions of the now-common diodes—roughly 1/40th the height of typical LEDs—don’t require a lens over their tops to disperse light. That allows Samsung to cram more of them onto its panel and bring them closer to the surface, creating a dense array with minimal light bleeding where it shouldn’t go. Paired with an AI-driven image processor, Neo QLED images fill an 8K screen with bright detail—even when it’s upscaling lower-res content, which, for now, is always.

Spatial audio adds a 3D element to music, simulating a true surround sound experience that makes it seem as though you’re sitting in front of the band. It was a big year for this type of immersive audio, as it landed on large streaming platforms including Amazon Music, Tidal, and Apple Music. Sony’s SRS-RA5000 Bluetooth speaker drastically rearranges its internal components to support those multi-dimensional recordings in a single device. Its seven speakers fling notes and voices throughout the room: three fire upward, three go straight out from the sides, and a woofer points downward to create booming bass.

Live-streaming content has come a very long way from someone simply holding up a smartphone camera. Blackmagic’s switcher gives content creators a scaled-down version of a big-wig broadcast control room. The board pulls in up to 8 channels of content via HDMI and allows a director to adjust levels and switch between signals on the fly—just like in a pro studio. The board can connect through a smartphone to stream over a cellular connection, or can output to a recorder. It does all this for a very small fraction of what a huge production board would set you back.

A single lens to shoot VR

Shooting VR or even 3D content typically requires at least two cameras capturing images from slightly different angles. Instead, Canon has integrated two lenses into one housing. Each 12-element lens creates an image that covers half of the image sensor in a full-frame camera. A super-wide focal length enables a 190-degree field of view, which means the setup can see slightly behind itself. Once the footage goes through an editing tool like Adobe Premiere, viewers can get the full VR or stereoscopic 3D experience through a headset like the Oculus Quest 2.

A remote that ditches AAAs

Many TV remotes still rely on alkaline batteries, which feels like an anachronism in 2021. So Samsung developed a controller with a solar panel built into its backside. Like your old high-school calculator, the remote can pull all the power it needs from any kind of indoor illumination. In the off chance it needs a little extra juice due to heavy use or lots of time spent in the dark, a USB-C port on the bottom provides another charging option. Samsung estimates that its plans to include these remotes with its TVs will eliminate the need for roughly 99 million AAA cells over the next seven years.

An iconic pro microphone for anyone

The original Shure SM7B microphone is a staple for podcasters and audio broadcasters thanks to its relatively compact size and superlative quality. Unfortunately, its XLR-only connection meant creators needed a mixing board and some audio know-how to use it. The MV7 has the same recording components and voice-isolating pickup pattern as its pro sibling, but it can also plug directly into a computer via USB. Shure’s companion desktop app provides all the essential settings normally found on a mixing board, including gain, mix, and an EQ limiter. (Simplified EQ and tone presets like “natural” and “bright” give an assist to anyone who isn’t quite sure what all that means.)

A guitar amp that fits on a keychain

About the size of the average car key fob, the Mustang Micro is a full-fledged guitar amp in a package small enough to toss in a pocket. The wee device plugs straight into any electric guitar or bass and sends riffs to a pair of wired headphones. Musicians can toggle among 12 amp-mimicking tones and 12 effects pulled from Fender’s full-sized Mustang line of amps. Connect it to a smartphone or other device via Bluetooth to pull in audio and jam along with any song—without driving the neighbors nutty.

Turn a smartphone into a portable console

Whether players choose to stream games from Xbox, PlayStation, or Steam, the Backbone controller helps provide a consistent, high-end experience a smartphone alone can’t touch. Plugged directly into an iPhone’s Lightning port, the controller offers all the familiar buttons and analog sticks of a full-fledged console’s interface—while the hard connection drastically cuts down on game-ruining lag. And, thanks to the telescoping brace that runs across the back of the device (from which Backbone gets its name), players don’t have to worry about accidental drops or disconnects.