The most innovative gadgets of 2021

Chips from some of the world’s biggest tech companies shined through supply chain woes to both earn spots among this year’s Best of What’s New. 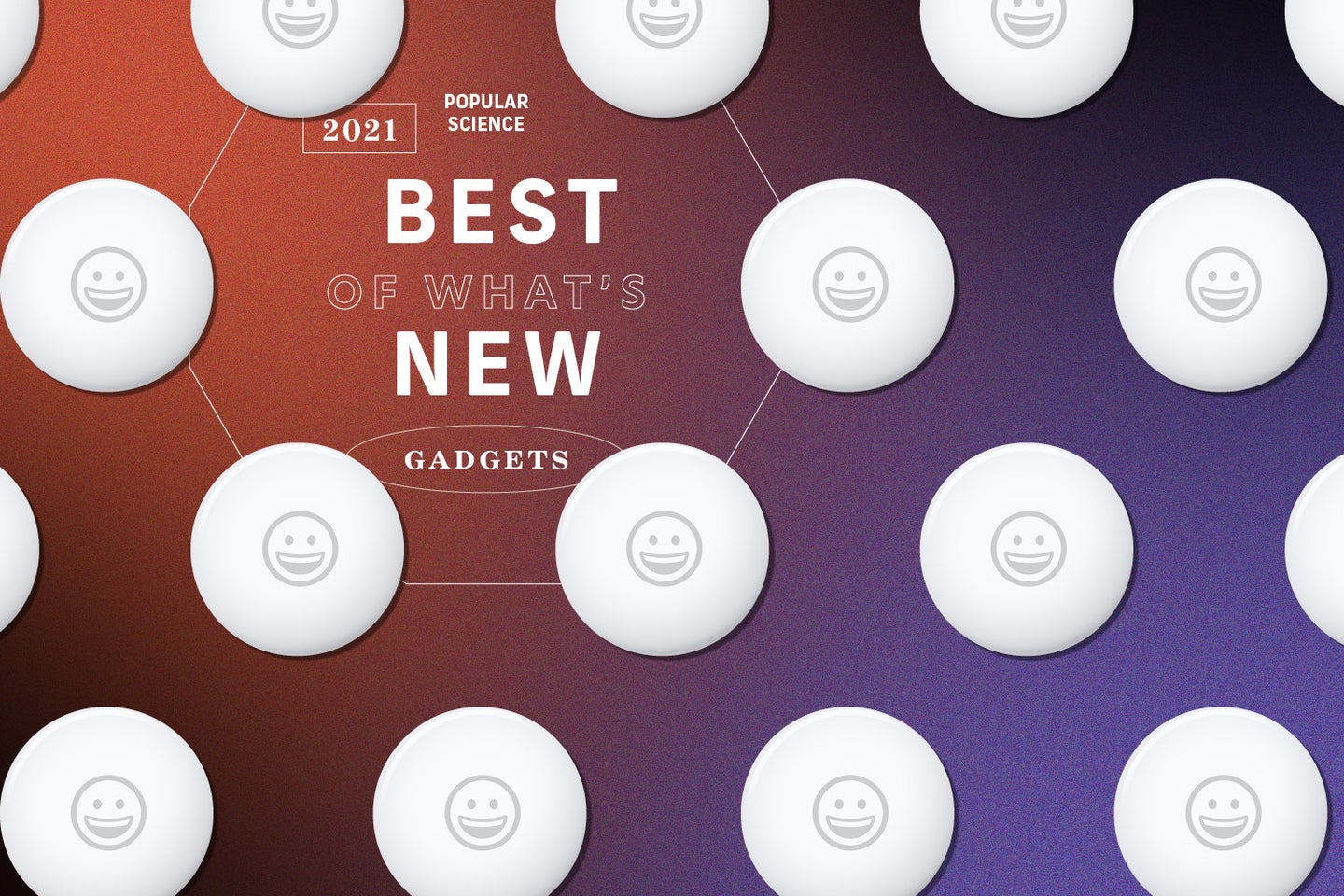 In many ways, 2021 came with a question mark. The year began with an all-remote Consumer Electronics Show, an event that offered scaled-back product lines with nebulous shipping dates. Despite all that uncertainty, 2021 turned out to be an important year for gadgets, largely thanks to the big players absorbing some of the chip shortage impacts. Two of the biggest tech companies in the world—Apple and Google—revamped their hardware; Samsung released a truly mature folding device; and Microsoft refined its Surface Pen with a seemingly small change that affects the entire experience. Of course, there were still a few surprises out there, too, one of which involved illustrations of hipster apes worth hundreds of thousands of dollars. Seriously.

Back in 2019, Apple announced its intentions to break up with Intel, the company that had been supplying the CPUs for Macs since 2006. Then, at the end of 2020, Cupertino announced the M1. It’s a system-on-a-chip, which means one silicon slab contains the CPU, graphics processor, system memory, machine learning hardware, and just about everything else a computer needs to operate. Because Apple controls the software and hardware surrounding the M1, its systems can eliminate layers of inefficiency. The chip launched with refreshes to the MacBook Air and MacBook Pro, laptops that obliterated benchmark tests for their classes. Apple also stuck its new silicon into the Mac Mini and the new ultra-slim iMac. They’re equally as impressive. The company has already updated the M1 with the new M1 Pro and M1 Max chips, which popped in October. Laptops with those guts are already outperforming pricier Mac Pros using the old architecture. It was a big swing for Apple and, at least so far, it has been a massive achievement.

At last, a fast, high-resolution camera

High-end digital cameras typically ask shooters to choose between high-resolution or super-fast shooting. With the A1, Sony designed an image sensor with its own onboard memory and paired it with one of (if not the) most powerful image processors on the market. As a result, this flagship body can capture 30 full-resolution 50.1-megapixel raw files per second, while performing 120 autofocus and auto exposure calculations in that same blink. For extra fun, photographers can choose to turn off the mechanical shutter and shoot in silence.

In March 2021, Christie’s auction house sold work by a digital artist named Beeple for $69. It wasn’t a painting or a sculpture, but rather a collection of non-fungible tokens, or, as they’re better known, NFTs. These tokens exist on the blockchain, public online ledgers that keep track of transactions involving digital assets. Think of them like virtual items you’d purchase in a video game, only that ownership exists IRL and can be worth thousands or even millions of dollars. Athletes and celebrities have spent big bucks buying NFTs from projects like the Bored Ape Yacht Club. Disney even made NFTs for its most popular characters, which is as clear a sign as any that the tech has outgrown the crypto bro community and hit the mainstream.

They look like big Mentos, but Apple’s AirTags are really clever little GPS-less locator devices that help people keep tabs on stuff that’s prone to getting lost. The gadgets, powered by wee button batteries, employ a super-low-power Bluetooth connection to ping off of Apple devices on the company’s FindMy network. Each tag can ping hyper-specific location information via Bluetooth to let you use your phone like a divining rod, which turns a frustrating hunt for your keys into a fun little game of hotter/colder. The company also built in anti-stalking protections, so if someone else’s AirTag starts moving with you, it can throw up an alert on your phone.

When you’re using it, the Galaxy Z Flip3 feels like a typical high-end smartphone. Oddly, that’s what makes it so special. When closed, it’s just over a half-inch thick and roughly 3.4 inches on its longest edge. That makes it small enough to fit in almost any pocket. Unfolded, it presents a 6.7-inch AMOLED display on par with chunky flagship handhelds. It’s the usability upgrades that really make this a huge leap, though: The screen is far less prone to splitting than it was in previous versions, thanks to a protective polymer film that tucks securely into the bezels at the edges to prevent peeling.

A savior of old photos

Despite what you may have seen on CSI, “enhancing” a photograph typically introduces digital jaggies called artifacts that can obliterate fine details. A new feature in Adobe Photoshop called Super Resolution leverages machine learning in order to blow up photos without making them look like ancient, low-quality JPEGs. The intelligence recognizes discrete objects in the scene to fill in the gaps, without guessing blindly about what those pixels should look like. The results can modernize photos from the time when 8 megapixels—less than the resolution of a 4K screen—was a real stretch.

A smartphone chip built for AI

For its Pixel 6 and Pixel 6 Pro smartphones, Google built its own system-on-a-chip specifically to handle ambitious tasks like image processing and real-time translation and transcription—without needing to call the cloud. The Tensor chip includes two high-performance cores, a pair of moderately high-performance cores, and four efficient cores. The efficient ones handle most typical tasks while the more-powerful modules are free to crunch away. For instance, the Pixel 6 can apply high-dynamic range capture to every frame in a video, so the movies sport vibrant colors and no blown-out highlights.

Open the Windows Sketchable App on a Microsoft Surface Pro 8 and start drawing in virtual pencil with the Slim Pen 2. It mimics the sensation of a graphic nib dragging across paper with eerie accuracy. Switch to “chalk” and the feel changes, offering a fairly accurate—though far less unpleasant—essence of marking up a blackboard. The stylus can pull off these impressions thanks to a custom chip inside, as well as strategically placed haptic motors that subtly shake and rattle with hyper precision.

Crack open most laptops, and you’re already in trouble. Manufacturers play a game of logistical Tetris every time they try to cram powerful PC pieces into increasingly trim machines. That usually involves gluing components in place, which makes the computers a nightmare to fix or upgrade. The Framework Laptop’s totally modular design expects people to swap parts as they break or become obsolete. Snap-in components make it simple to change out everything from keyboards to mainboards, memory, and ports. Ardent Right To Repair advocates iFixit gave it a 10 out of 10, which means it’ll stay out of the recycling center for way longer than the machine you’re looking at right now.

Making computers work for everyone

People with disabilities often modify computing devices so they can effectively interact with them. Microsoft’s accessibility kit for its Surface computers takes that kind of hacking off their hands. Textured labels for keycaps make specific buttons easier to find without having to see them; tactile port indicators do the same thing for connectivity; and adhesive tabs with rings and lanyards make it simpler to open and adjust the laptops without the use of a person’s hands. While none of these simple add-ons are engineering marvels, they represent an effort to make Surface computers accessible to more people—without sending them out into the unpredictable world of kludgy third-party accessories.