The top 10 health and medicine breakthroughs of 2021

From novel vaccines to an ultra-sharp CT scanner, these are the Best of What's New. 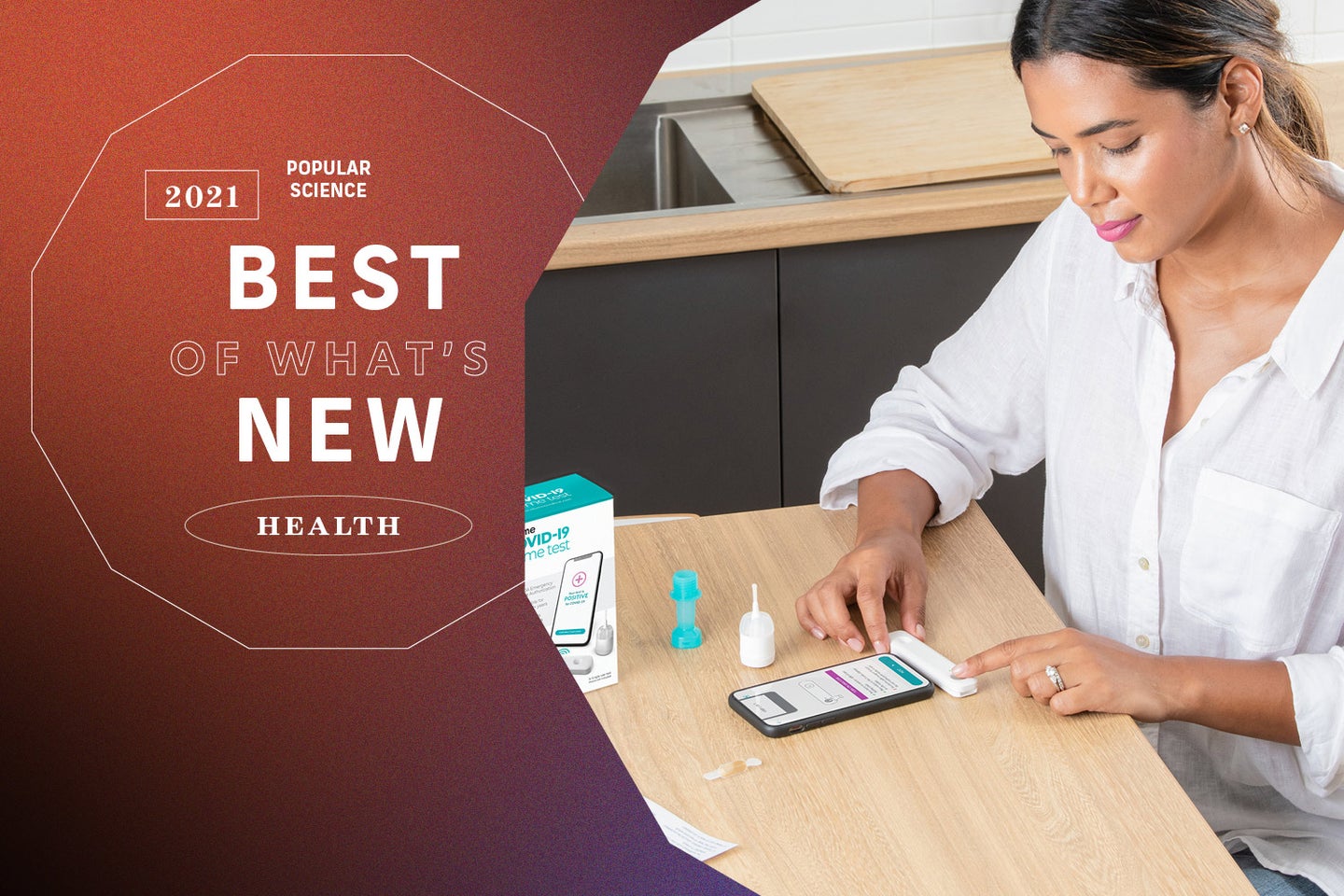 Never in recent history has the world been so engrossed by the most mundane stages of the scientific process. But for the last two years, each incremental step in science—from lab research to understand the evolution of COVID-19 and develop a vaccine to fight it, to clinical trials, to pharmaceutical approval—meant one thing: Hope. And that’s what this list of the year’s best health innovations highlights. In addition to two novel vaccines released to combat the most deadly pandemic of our time, the world also saw the first-ever drug approved to treat rare progeria, a new insulin formulation that might finally make the life-saving therapy affordable for all, and a malaria vaccine decades in the making.

Innovation of the Year: Two groundbreaking vaccines for COVID-19

To pull humankind out of the COVID-19 pandemic, doctors and public health experts knew we would need a safe and effective vaccine. Pharmaceutical companies around the world have raced to characterize the SARS-CoV-2 virus, understand how it invades our immune systems, and develop a targeted injection to prevent it. As of November 2021, at least 28 promising vaccines have been trialed in humans, and 15 have been authorized for emergency use around the world. But two stood out enough to win our top award: Pfizer’s Comirnaty, developed in partnership with Germany-based biotechnology company BioNTech, and Moderna’s SpikeVax, which the Cambridge, Mass., company developed with the help of the National Institutes of Allergy and Infectious Disease.

The jabs are unlike any other inoculation on the market today. They are the first so-called mRNA vaccines—a technology that has been in development for decades. They work by harnessing messenger RNA, the genetic bits of code that tell our cells how to make proteins. The vaccines carry mRNA with instructions for making a protein found on the outside of SARS-CoV-2, the novel virus that causes COVID-19. Our bodies quickly destroy the errant mRNA instructions, but not before our cells build the corresponding proteins. Those proteins then attach to specialized immune cells, triggering the system to recognize them as invaders and develop antibodies against their ilk. If a vaccinated person comes into contact with SARS-CoV-2, those antibodies can spring into action, reproduce, and destroy the virus before it replicates out of control, thwarting the disease.

This duo of shots also work remarkably well. In clinical trials, both of the two-dose regimens were at least 94 percent effective at preventing symptomatic cases of COVID-19. The vaccines also fended off hospitalization nearly 100 percent of the time. While a multitude of inoculation options were crucial to curbing the spread of the virus, these two mRNA therapies are especially poised to change the course of the pandemic—and the future of preventative medicine.

A new treatment for a rare, deadly disease

People diagnosed with Hutchinson-Gilford progeria syndrome rarely live beyond 15 years of age, and until now treatments could only target its symptoms and complications. The disease occurs when a genetic mutation changes the shape of a protein in the nuclei of a carrier’s cells. The faulty protein, called progerin, causes cells to prematurely die. Zokinvy prevents the buildup of defective progerin, thereby minimizing the damage it can do. In addition to prolonging lifespan by several years, the new drug also reduces symptoms of heart and bone problems associated with the rare condition, which affects roughly 400 children worldwide.

Since 2012, researchers have been tweaking CRISPR, the gene-editing tool that easily edits the human genome, to treat diseases caused by DNA mutations. But until this year, the method, which involves injecting a patient with tweaked stem cells, had only been used to treat conditions whose mutations are in the bloodstream, such as sickle-cell anemia. In August of 2021, researchers published the results of a six-person clinical trial in which doctors attempted to fix a genetic defect that causes a rare liver condition called transthyretin amyloidosis. Packaged inside a tiny blob called a lipid nanoparticle, the gene-editing tech made its way to the liver, where it went to work correcting defective cells. There’s still a long way to go before this treatment, which is still in the first phase of clinical trials, finds its way to the market. But, if successful, it could pave the way for healing a wide variety of genetic conditions.

A game-changing shot at Ebola

When infected with Zaire ebolavirus, people can experience high fevers, severe bleeding, and organ failure, which is fatal in half of cases. Researchers at biotech company Regeneron have now created monoclonal antibodies—lab-crafted molecules that mimic the work of the immune system’s natural defenses to help take down invaders—to target the illness. Inmazeb is a combination of three antibodies that target a protein on the surface of the Ebola virus. In a clinical trial, 66.2 percent of the 154 people who received Inmazeb survived, compared to only 49 percent of the 153 people who didn’t. While not a surefire cure, monoclonal antibodies have been crucial in treating many viral diseases. The FDA gave an emergency-use authorization to two monoclonal antibody therapies for COVID-19 in 2021, and approved another one to treat Ebola as well.

The first at-home test for COVID-19

Vaccines greatly reduce the risk of acquiring and spreading COVID-19, but they’re not perfect. Breakthrough cases will continue to emerge even among highly vaccinated communities. That’s where testing comes in. The Ellume at-home COVID-19 test was the first of its kind to get FDA authorization, allowing consumers to check their COVID-19 status without going to the doctor. The test consists of a nasal swab, a dropper, processing fluid, and an analyzer. An app takes you through step-by-step instructions: Connect the analyzer via Bluetooth, empty the processing fluid into the dropper, swab both nostrils, attach the swab to the dropper, squeeze five drops onto the analyzer, and wait 15 minutes for your results. Ellume reports that the test identifies positive cases 95 percent of the time and negative ones 97 percent of the time.

A better way to fix a torn ACL

The ACL, or anterior cruciate ligament, stretches diagonally across the middle of the knee and is vital in keeping our bodies upright and stable. It’s also prone to failure; according to a 2016 report in the Journal of Clinical Orthopedics and Trauma, it’s the most common source of significant knee injury. Repairing a torn ACL requires surgery, and sometimes reconstruction—an invasive procedure where a piece of tendon and bone is taken from another part of the body, or from a donor, to rebuild the torn ligament. The newly FDA-approved BEAR Implant takes the place of that material. Made of bovine collagen, it’s secured in place between the two torn ends of the ACL to bind them together. The patient’s body absorbs the device within a few months, by which time, new, healthy tissue has grown in its place.

CT scans provide detailed images of the inside of the human body that help diagnose and track disease and injury. Conventional scanners create images by combining the total energy from several x-rays. During this process, some energy from the x-ray is lost, leading to lower resolution. Siemens’ new scanner, called the Naeotom Alpha, uses detectors that count photons to measure every particle of light that comes through, leading to sharper, higher contrast images of the inner workings of your body.

The most affordable insulin ever

Some 34 million people live with diabetes in the United States alone. For many of them, insulin—a hormone usually produced in the pancreas that helps process glucose—is necessary for survival. Despite this, insulin remains an extremely expensive product, even for those who are fully insured. Semglee could change that. It’s an interchangeable, biosimilar insulin product—the first of its kind to gain recognition from the FDA. A biosimilar is a biological therapy (hormones and vaccines are examples) that has no meaningful difference from one that’s already FDA-approved and on the market—think of it as a generic medication that pharmacists can swap for a name-brand drug, but that doesn’t require prior approval from a doctor to make the switch. Semglee, which comes in 10 mL vials and 3 mL prefilled pens and is administered subcutaneously once daily, is medically identical to Lantus, the name brand for insulin.

The first vaccine for malaria

By some estimates malaria kills about half a million people worldwide every year. GlaxoSmithKline’s Mosquirix—a vaccine decades in the making—generates an immune response against Plasmoduim falciparum, which is among the most deadly of the five parasites that cause malaria, and the most prevalent strain throughout Africa. The vaccine received an endorsement from the World Health Organization; a distinction that gives it the go-ahead for wider distribution and use. While the inoculation is only about 50 percent effective against severe malaria, with a significant drop in efficacy after a year, it’s still one of the best ways to prevent the deadly disease.

According to the CDC, about 1.4 million people in the US go to the doctor for vaginal yeast infections each year. While over-the-counter treatments often work just fine, more stubborn cases can resist. Brexafemme is the first novel antifungal in more than two decades, representing an entirely new class called triterpenoids. It works by blocking an enzyme that helps create a protective coating around Candida fungi, which cause vaginal yeast infections. Without this covering, the microbe quickly dies off. The two-tablet formulation starts working within a few days, and remains in a person’s system for as long as two weeks to prevent a resurgence.