What Would Happen If Everyone Peed In The Ocean At The Same Time? 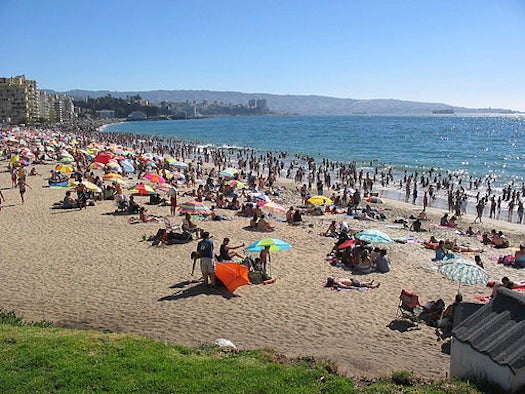 Lauren Wolf, an associate editor at Chemical & Engineering News and self-described ocean-urinator, recently took it upon herself to find out the scientific truth about what really happens when humans pee in the ocean.

She first turned to the internet, of course. As she discovered, though the body excretes urine in order to rid the system of unwanted chemical compounds, it’s not necessarily harmful. In fact, the composition of pee isn’t that different from that of seawater. The average human’s urine is more than 95 percent water and contains 1-2 g/L of sodium and chloride ions. Upon exiting the body, urine from a healthy human is also sterile. Only once it’s out does it begin to attract existing colonies of bacteria, but it wouldn’t add any to the water.

There’s one component that poses a potential problem given its high concentration: urea, a nitrogen-heavy molecule that amounts to a substantial average of 9 g/L of urine. In the grand scheme of the ocean however, that’s tiny.

According to Stuart Jones, biochemist in the department of clinical biochemistry at King George Hospital, a person generally excretes 0.2L – 0.5L of urine at a time. This translates into three grams of urea.

Even in the extremely rare scenario that the all the world’s 7 billion citizens peed in the Atlantic Ocean at the same time, there would be about 6×10-11 g/L of urea within a total collective volume of 3.5 x1020 L. Essentially a minuscule amount. And as it turns out, nitrogen is an important fertilizer that contributes to the survival of certain plant species within the aquatic biosphere.

Wolf is sure to emphasize that the same isn’t necessarily true of small, concentrated bodies of water like pools or streams, however. To cover her bases she also recognizes that humans can excrete amounts of other byproducts not mentioned here.

Moral of the story: when you gotta “go,” it’s OK to pee in the ocean. After all, the animals do it. And some, like whales, pee at much larger rates with much greater amounts of sodium and chloride ions than humans.

“No question, pee in the ocean,” Jones said in the article. “Urine is harmless stuff in the first place and is diluted to the point of insignificance within minutes. There are far more harmful things in the ocean to worry about!”

Another important thought experiment: Is it ever OK to drink your own pee?