The controversial studies are meant to help predict what the virus will do next. 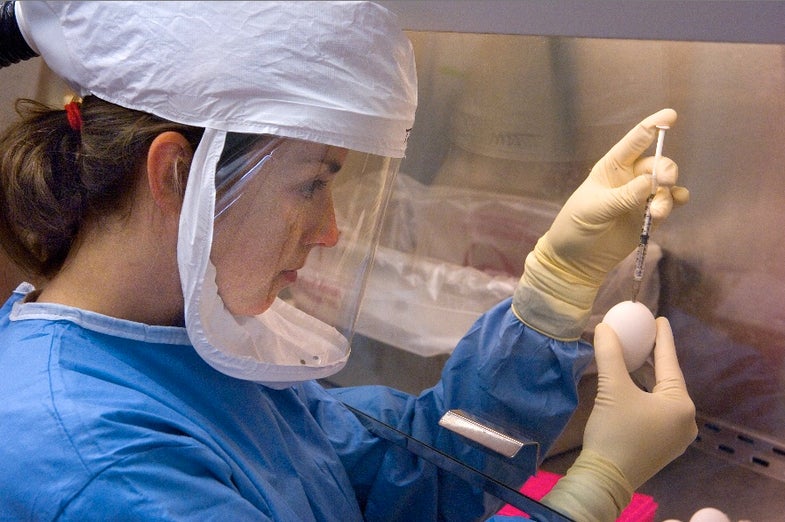 A team of virus researchers is set to perform studies on H7N9 that may make the bird flu more resistant to drugs and more easily transmitted between humans. The scientists announced their plans today in two major science journals, Nature and Science.

H7N9 first arose in eastern China this spring. Since then, it has killed 43 people and sickened 90 more. The outbreak is now under control, but the research team says the virus could gain traction again this winter flu season, so they want to do so-called gain-of-function studies to learn more about the virus quickly.

In short, it’s a question of whether the risk is worth the knowledge we gain about epidemic flus. Opponents worry that the ability-added viruses could escape from labs by accident and infect people. They also worry that terrorists could use published papers about the studies as recipes for bioweapons.

Proponents say the studies offer information that experiments on viruses in their natural state don’t. For example, researchers will test how many changes are needed to make H7N9 spread more easily than it currently does, to help them predict whether such a change is likely to happen naturally. “If only a few mutations are needed, the risk may be greater than if many changes are required,” Yoshihiro Kawaoka, a pathologist at the University of Wisconsin-Madison, wrote to Popular Science in an email.

The latest gain-of-function studies face tougher oversight than before. U.S. health agencies announced today that they’ve set up a new level of review for any H7N9 studies that would make the virus easily transmissible in droplets carried in the air—the kind of invisible droplets that people make when the cough or sneeze, for example. U.S. agencies would be the primary funders of any gain-of-function H7N9 studies.

Prior to this announcement, researchers from all over the world performed many studies on H7N9 in its natural state. They’ve sequencing the virus’ genetic material, tracked how it’s transmitted and observed what happens to ferrets—a lab animal often used for flu studies—infected with the virus.

In one of the latest pieces of H7N9 research, scientists in China reported yesterday that they’ve found the first evidence that H7N9 is able to spread between people. The World Health Organization has said it thought this likely happened in isolated cases, but scientists had previously only seen proof of the virus moving from infected birds to people. H7N9 still seems to have a tough time spreading between people, as the sick man the Chinese scientists studied passed it only to his daughter, who tended to him, but not any of his dozens of close acquaintances. H7N9’s difficulty in passing between people has helped keep it from spreading further and becoming a pandemic.