What Happens To A Human Who Spends A Month Under The Sea?

Fabien Cousteau and his team are setting out to break the record for living in an underwater habitat. 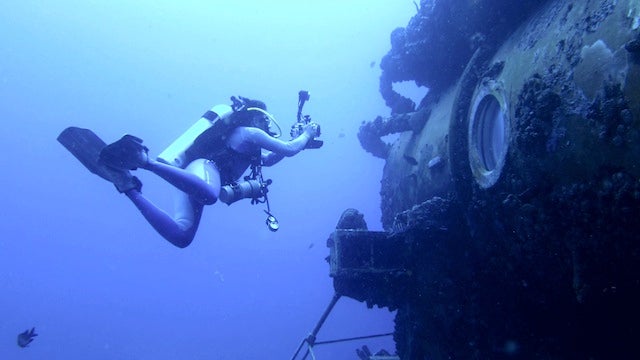 On June 1st, Fabien Cousteau, grandson of Jacques Cousteau, swam down to the last existing undersea habitat research lab in the world, Aquarius, in the Florida Keys. He’ll live there for 31 days, which is a day longer than the time his grandfather’s team spent living in his undersea habitat, Conshelf II, roughly 50 years ago. Since then, undersea bases have been created all over the world, and have since lost their funding and ceased operation. Aquarius stands as the last.

The aquanauts joining Cousteau on “Mission 31” are photographers, scientists from Northeastern and MIT specializing in marine biology and underwater engineering, and Aquarius staff. Florida International University, the school responsible for saving Aquarius and operating it after NOAA cut funding last year, is of course sending down some of their own scientists, too. They’ll all experience the unique challenge of living underwater for over a month in the pressurized saturated diving environment.

Saturated diving is a type of diving which allows the body to gradually soak up inert gases by staying at depth for a long period of time. These gases would harm a standard scuba diver by expanding like the bubbles in a shaken bottle of soda when the diver returns to the surface, causing pain, paralysis, and sometimes death. With the team sleeping in the base, at depth, and never surfacing, the divers are free to experience the most useful part of living in Aquarius: the ability to dive for 2-8 hours a day (as opposed to about an hour maximum per day that a regular scuba diver can achieve) without suffering from decompression sickness. At the end of the mission, the entire base is slowly brought back to normal pressure so that the gases can escape the diver’s bodies safely, at which point the divers are free to resurface.

To find out what the human body and mind go through living in an underwater habitat, I spoke to various experts on living underwater, such as John Clark, Scientific Director for the U.S. Navy Experimental Diving Unit, who researches the effects of deep dives to 1,500 feet and Navy saturation diver Marc Chase who has worked on salvage jobs like the recovery of the USS Monitor’s wreck. I also spoke to Mark Patterson and Brian Helmuth, Mission 31 science advisors who have spent working time in Aquarius, and Mark Hulsbeck, the oceanographic field operations manager who will have spent 200 days in the base overall by the end of this mission.

In the end, because research about long, relatively shallow underwater living is limited, there are a lot of theories as to the effects of living underwater on human beings, but much of it is controversial, anecdotal, and unproven by even those who study it and have experienced it.

“There are two kinds of divers, those that pee in their wetsuits and those who are liars.”

The greatest malady that occurs on these undersea expeditions, according to Mark Hulsbeck, is what some aquanauts call “creeping crud.” This ranges from acne to rashes to diaper rash, experienced by divers that pee in their wetsuits. (Given the extended diving time afforded by saturation, urination in a wetsuit is nearly impossible to avoid. Mark Hulsbeck told me “There are two kinds of divers, those that pee in their wetsuits and those who are liars.”)

The best cure for these skin maladies is to shower off after every dive and use antibacterial soap, as well as the fresh towels that are frequently delivered to the base in pressure-cooking pots, sealed with bolted lids. Proper hygiene, in other words.

Ear infections are also common, but antiseptic solutions made with aluminum acetate are used to take care of them quickly before the infections can worsen.

Some aquanauts swear that the high-pressure environment, which is 2.5 times the normal pressure at sea level, increases healing times like hyperbaric chambers do, and that cuts can heal overnight. Others believe that to be untrue; hyperbaric chambers that provide oxygen therapy have a much higher level of oxygen in them than the atmosphere in Aquarius.

Besides that, other side effects of living in underwater bases include paleness and reduced vitamin D production, from lack of exposure to the sun. When aquanauts return to the surface, they are distinctly aware of the sensation of wind, which they might have not even realized they were missing.

Many aquanauts have reported that their sense of taste diminishes in the habitat. Mark Patterson theorizes that the higher density of air in the habitat, means that there are fewer parts per million of food odors diffused in the air for the nose to detect. Regardless of what the actual science is, many aquanauts resort to putting hot sauce on everything.

Both the extended dive time and thicker in-habitat air pull heat from divers much more rapidly than a normal sea level atmosphere would, and so their metabolisms must work harder to maintain body temperatures. People tend to eat a lot as a result. In the old days, when the habitat was positioned near land in St. Croix, near land, aquanauts were catered fresh local food like beans, rice, and lobster. After the base was relocated to the Florida Keys (after a hurricane struck St. Croix), aquanauts relied on MREs, with choices diminishing as the season progressed. (Brian Helmuth says that the Salisbury steak was particularly not good.) These days, under the management of Florida International University, Aquarius’s aquanauts eat rehydrated freeze-dried camping food, which is high-calorie and varied. Hulsbeck expects the aquanauts to get sick of it before their 31 days are up.

Occasionally, aquanauts receive deliveries of pizza, hamburgers on special request (or lasagna made by Hulsbeck’s wife) which are brought down in sealed containers by support divers, but those meals are rare.

In the habitat, because of the exhausting nature of being in the water several hours a day and because even time inside the habitat is busy, everyone sleeps really well at night. One aquanaut, professional photographer Kip Evans, complained that silver fish called tarpon swimming near the bedroom porthole, reflecting outside habitat lights back into the bunk room, made it difficult to sleep. The habitat does, however, have plenty of white noise from carbon dioxide scrubbers, and the general static of reef creatures like snapping shrimp and other animals living their lives on and around the base, which has become an artificial reef.

The greater air density causes aquanauts’ speech to become slightly higher pitched when they first enter the base, but either the pitch adjusts or people’s ears adjust to the higher-pitched conversation.

Navy divers, Marc Chase told me, take great care to not get respiratory diseases from their dive gear, because the sick person can’t be evacuated without the entire team having to also be slowly brought to normal pressure (decompressed) and leaving, too. And in close quarters, it’s easier to contaminate each other. They are careful not to let anyone who has an existing cold down into the habitat, and have never had to evacuate the lab because of infection.

Aquanauts use a little hut outside the moonpool, the part of the base with an open floor that gives the aquanauts access to the sea, which they call the gazebo. The gazebo has an air pocket inside of it, and to reach it, aquanauts have to hold their breath and walk or swim over, wearing a swimsuit. Bathroom breaks are often not private as the fish have learned that when a diver enters the gazebo, it’s feeding time. After one too many particularly nerve-wracking incidents with fish getting nippy, the Aquarius staff have set up a bubble curtain powered by compressed air to keep the fish away.

Other than having to get accustomed to lower amounts of light, people don’t report noticing that living underwater affects their vision.

Some aquanauts report feeling nitrogen narcosis, a syndrome not uncommonly experienced during diving, wherein at a certain depth a diver can feel drunk. Some have theorized that the depth the habitat is at is not deep enough to cause this effect immediately, but after the aquanauts’ bodies become saturated with nitrogen in the habitat after 24 hours, a sense of giddiness occurs. Mark Hulsbeck believes that it might not be nitrogen narcosis at all, but just a sense of joy from doing something as cool as living in an undersea base for a few days.

The aquanauts aren’t screened for psychological stability or vulnerability to claustrophobia, antisocial behavior, or cabin fever.

Navy saturation divers who plan to be on long missions spend the preceding weeks together to vet out incompatibilities in personality and work ethics, however.

Back in the day, there were no internet connections in Aquarius, and aquanauts could only read books or stay busy to stave off boredom. Now they can watch Netflix and call their loved ones as often as they want.

When asked if an aquanaut could stay in the base indefinitely, Mark Hulsbeck offered that it’s not known what the limits are, but given the higher density of air and relatively higher amounts of oxygen taken per breath, there would be eventual damage to a human’s circulation systems, which Hulsbeck referred to as “pulmonary toxicity.” The relatively shallow depth of the base was chosen so that longer saturation missions like this one could be feasible, but rarely do missions come as close to being as long as this one will, as most are only 7-10 days.