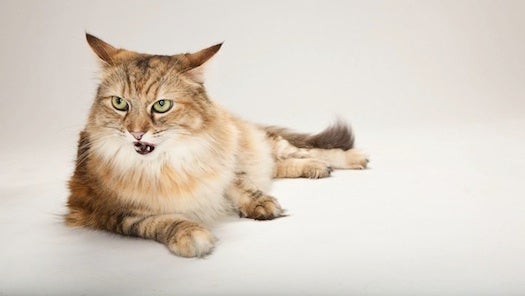 Samantha was not a part of the BBC cat behavior study, but she is still very nice to look at. Evan Kafka via Suzanne LaBarre
SHARE

Wish I could do the same with my cat! The BBC and the Royal Veterinary College recently hung GPS trackers and small cameras onto the collars of 50 pet cats in a village outside of London. Their results form one of the largest-ever studies of domestic cats, according to the BBC.

It turns out that cats visit other yards and even other houses. Cats from neighboring houses sometimes appeared to switch off using the same territory, which helped them avoid confrontations. Nevertheless, the tracked cats still got into territorial squabbles, which you may have seen/heard.

In general, the cats had small territories, even though they had plenty of countryside available to them, veterinarian Alan Wilson wrote for the BBC. That finding jives with previous research on housecat habits.

The BBC has a page with profiles of 10 of their tracked cats, including maps of where each of the kitties went and excerpts from their cameras’ footage.

Technologists at the BBC developed custom cat cams for the project. The final cameras had day and night settings, captured higher resolution footage than commercially available pet cameras, lasted eight to 10 hours on a single battery charge, and weighed just over an ounce. You can check out some pictures of cats wearing them.

BBC Two is airing a documentary today about the project. The scientists involved plan to publish a formal paper about their work in the future, Wilson wrote.