HPV vaccines have always been advertised as protecting women, but a new study shows they also work against an infection that causes a throat cancer that's much more common in men. 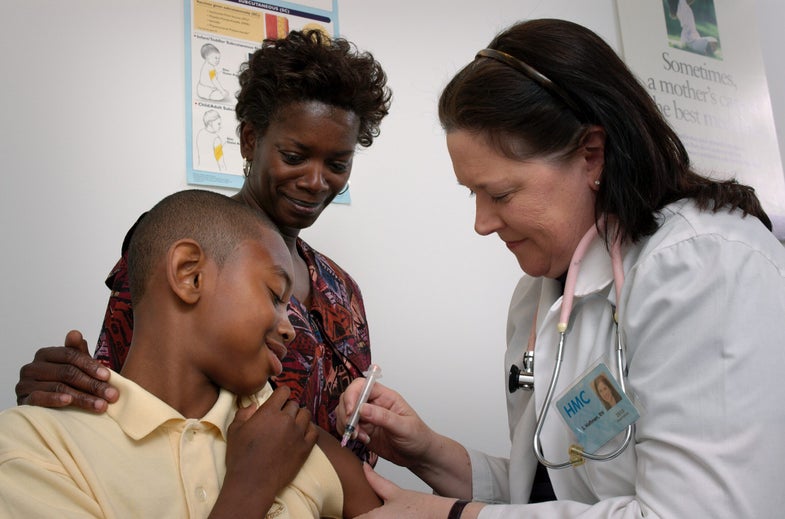 2006 Content Provided by: Judy Schmidt This photograph shows a 13 year old male receiving an intramuscular vaccination in the deltoid muscle, from a nurse. Vaccinations are most often given via the intramuscular route in the deltoid or thigh muscle, to optimize the immune response of the vaccine and reduce the adverse reactions in and around the injection site. Photographer: James Gathany
SHARE

The same vaccine that protects women from cervical cancer also prevents an oral infection that sometimes leads to throat cancer in both sexes, a new study has found. And the throat cancer is actually much more common in men than women.

The vaccine has been controversial in the U.S. The U.S. Centers for Disease Control and Prevention recommend boys and girls get a human papillomavirus vaccine around age 11 or 12. However, some parents oppose the recommendation because they believe offering the vaccine gives their kids the message that sexual activity is okay. Others seem to think their kids won’t need it.

The study didn’t include any men, but previous studies have found that HPV vaccines are equally effective against infections in men and women.

Just last month, actor Michael Douglas told the U.K.’s The Guardian that his throat cancer was caused by an infection from performing oral sex on a woman. (A doctor The Guardian talked with, who hadn’t treated Douglas, seemed to think it’s more likely Douglas’ cancer came from a combination of smoking, drinking and infection.) Douglas said he has been clear of the cancer for more than two years now.

An estimated 14 million Americans get infected by HPV every year. Although most won’t see any symptoms, the virus can cause genital warts, cervical cancer and other cancers.

The study was performed in Costa Rica, with funding from the U.S.’ National Cancer Institute. The study scientists came from institutes in Europe, the U.S. and Costa Rica. GlaxoSmithKline donated the vaccine for the study.