Scientists Can Pluck Images Out Of Your Dreams

A new method can visualize with 60 percent accuracy what you're seeing while you sleep. 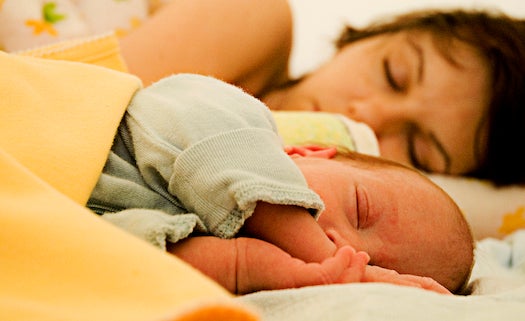 With just an fMRI, an algorithm, and the internet, researchers from Kyoto, Japan predicted with 60 percent accuracy what a person was dreaming about, Smithsonian magazine reports. The idea, like the process, isn’t all that complicated: Our brains react measurably differently to different stimuli: looking at a book or a building doesn’t cause the same reaction. So the Kyoto team had three people sleep in an fMRI for three-hour stints over 10 days, and hooked them up to an EEG, which used electrical signals from the body to track which stage of sleep the were in were in.

Early on, just a few minutes after falling asleep, dreams started coming in bursts. The scientists woke the subjects up soon after and asked them what they saw. (For each participant, they actually did that 200 times, presumably turning them into the Grumpiest People In The Universe.) The researchers wrote down the 20 most common things the subjects saw: people, buildings, etc. They then found images on the internet that matched those common things, showed them to the subjects while they were awake but still in the fMRI, and took a reading. That information was fed into a learning algorithm. When the subjects slept again, the algorithm spit back this ’80s music video-like representation of what the sleepers saw.

The biggest words at the bottom are the algorithm’s predictions of what the dreamer is seeing. When the researchers woke up the subjects again and asked what they saw, the algorithm was right 60 percent of the time. It was better at distinguishing between, say, a scene, like a street, and a person, but it couldn’t guess specifically if the “scene” was of a building or something else. Still, 60 percent, even though it might not be high enough to do much other research with, is unexplainable by chance.

In 2011, we reported on a study from another team that’s reminiscent of this one. The researchers in that study pulled off a similar trick by scanning subjects’ (awake) brains to reconstruct a video clip they’d watched. (We took an even deeper look at the process, actually, back in 2010.) This study is similar, but the researchers say it’s the first time the contents of a dream have been plucked from a sleeper’s head. So even if the team was only able to do it with a relatively low 60 percent accuracy, the technique is probably just going to get better from here.