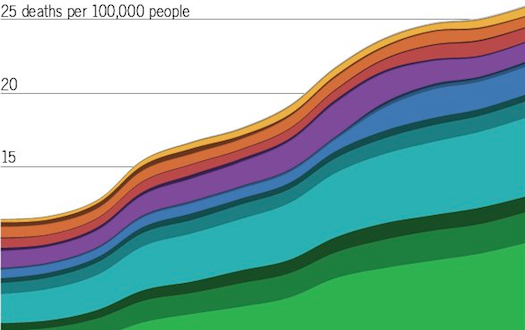 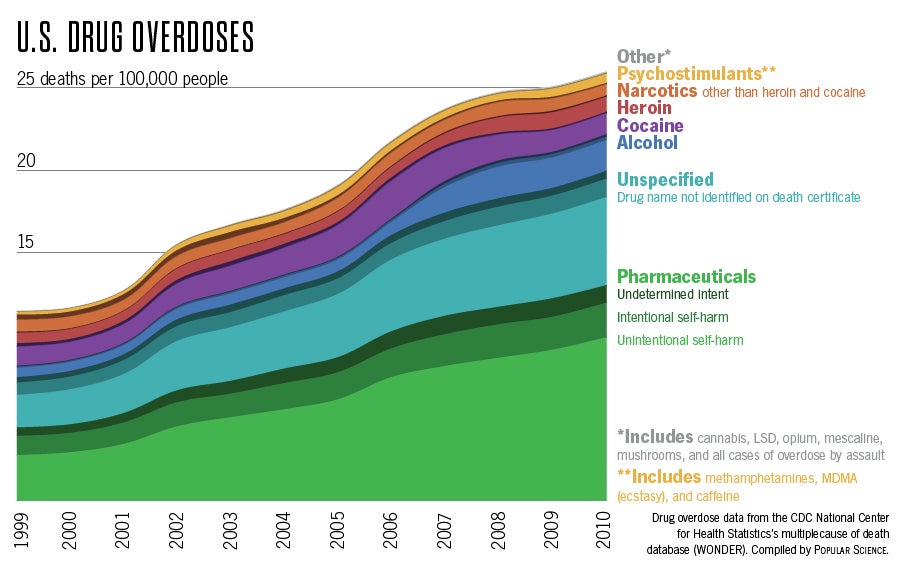 In 2010, there were 80,000 drug and alcohol overdose deaths in the U.S., according to the Centers for Disease Control and Prevention’s WONDER database. The database, maintained by the National Center for Health Statistics, keeps a tally of all the deaths listed on certificates nationwide. They’re classified by the ICD-10 medical coding reference system.

Death reporting in the U.S. requires an underlying cause—the event or disease that lead to the death. This chart represents all those listed in the CDC database as “accidental poisoning,” “intentional self-poisoning,” “assault by drugs,” and “poisoning with undetermined intent.” In addition to the underlying cause, a death certificate has space for up to 20 additional causes. That’s where “cocaine” or “antidepressants” would show up. The subcategories are limited in their detail—many drugs are lumped together, like MDMA and caffeine, which are listed together as “psychostimulants.” And about a quarter of all overdose death certificates don’t have the toxicity test results listed at all, landing them in the “unspecified” stripe.

By adding all those sub-categories up, imperfect as they may be, it’s clear that the rate of reported overdoses the U.S. more than doubled between 1999 and 2010. About half of those additional deaths are in the pharmaceuticals category, which the CDC has written about before. Nearly three-quarters of the pharmaceuticals deaths are opioid analgesics—prescription painkillers like OxyContin and Vicodin. And while cocaine, heroin and alcohol are all responsible for enough deaths to warrant their own stripes on the chart, many popular illegal drugs—including marijuana and LSD—are such a tiny blip as to be invisible.

A few caveats about the statistics: if a person had multiple drugs listed on their death certificate, they’re being counted twice here. Also, the database doesn’t include nonresidents—either undocumented immigrants or U.S. citizens living abroad.