Deadly pertussis is on the rise in the U.S., but is it really the fault of the anti-vaccine crowd? 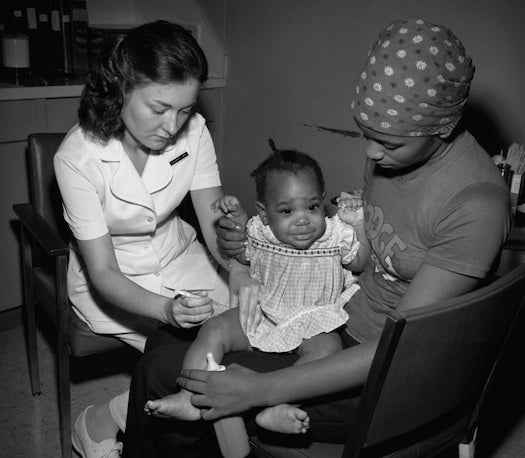 There were more cases of whooping cough in the U.S. in 2012 than in any year since 1955, provisional data suggest. The disease, which still sounds a little old-fashioned to these young ears, has been on the rise in America since 1980. What’s going on?

It’s easy to blame parents who choose not to vaccinate their kids, based on anti-science beliefs. Indeed, researchers have found that unvaccinated kids have sparked whooping cough (scientifically known as pertussis) and measles outbreaks in certain schools.

Yet because their numbers are small, they’re not enough to explain the overall U.S. rise. “We don’t believe the small numbers of parents who are refusing pertussis vaccines for their children are driving the large numbers of cases we’re seeing across the country,” Alison Patti, a health education specialist with the Centers for Disease Control and Prevention, wrote in an email response to my questions.

Instead, the CDC attributes the trend to doctors’ increased awareness of the disease, improved diagnostic tests, and a newer version of the vaccine that kids began receiving in the 1990s. That last reason has gotten extra scientific oomph recently, with the publication of several studies over the past year.

The newer vaccine is effective, says Nicola Klein, a physician and researcher at the Kaiser Permanente Vaccine Study Center in California. “It just doesn’t last as long as we would like.”

Klein performed the latest study to find that infants who received the newer vaccine, which has fewer side effects than its predecessor, begin to lose their immunity around age 8 or 10, Science reported. At that age, whooping cough is uncomfortable, but not usually dangerous. In infants, however, pertussis can be fatal. 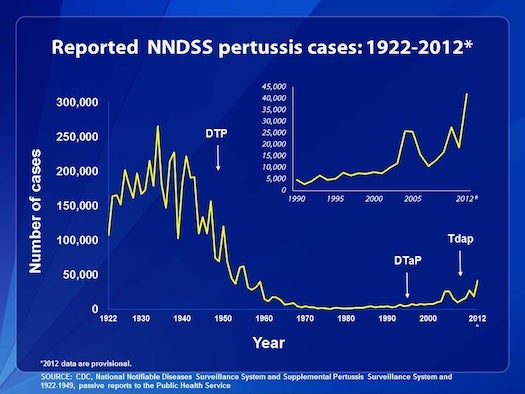 This graph of reported pertussis cases since 1922 also marks the introduction of different versions of pertussis vaccines.

The difference is that the older vaccine used killed versions of the Bordetella pertussis bacteria. It offered long-lasting immunity, but it caused fever and severe pain in most infants. In some babies, it caused seizures or fainting fits—pretty scary for a parent. What followed was a lawsuit that led to the adoption of new vaccines that contain purified pertussis proteins, but not the entire bacterium. You can check out the whole history in Science. One milestone was that in 1991, an Institute of Medicine report found that the so-called whole-cell vaccine doesn’t cause brain damage, as the parents in the lawsuit contended, but by then the changeover was already underway.

For those who like to extol the tougher characteristics of earlier generations… yes, some of the scarier side effects for the whole-cell vaccine probably had to do with its longer-lasting protection. “Probably some of that more severe reaction was because of its more brisk immune response,” says David Witt, another Kaiser Permanente physician who has studied pertussis outbreaks in California.

But the whole-cell pertussis vaccine isn’t coming back to the U.S., Witt says. U.S. companies no longer make it and if they were to start again, they would have to get approval from the Food and Drug Administration just as if they were introducing a whole new drug. That’s probably not worth the risk. Instead, companies are more likely to work on a better, longer-lasting vaccine that doesn’t have those whole-cell side effects. “It’s probably the better solution,” Witt says.

Meanwhile, everyone I talked with said it’s important for kids to get all of their doses of the whooping cough vaccine on schedule. The CDC also recommends pregnant women, plus anybody who’s in close contact with infants, get the vaccine.