How Do You Depress A Rat? Harass It With A Robot 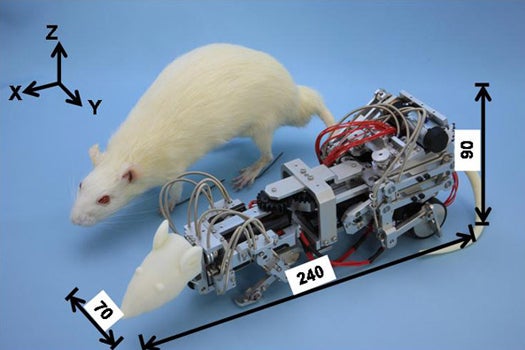 Rats and mice are often instrumental in testing new drug treatments before they reach the clinical use phase. To create the appropriate conditions to test a drug for depression, though, researchers need to induce a model of depression in the test subject.

In order to create a workable model of a human mental disorder like depression, anxiety or schizophrenia, rats are often genetically manipulated or have their nerve system surgically altered. Sometimes they are forced to swim for long periods of time. Now, researchers at Waseda University in Tokyo have created a new method: Let a robotic rat terrorize the rats into depression.

WR-3, a robotic rat designed to interact with lab rats, bugs the rats until they exhibit signs of depression, signaled by a lack of activity — when rats are depressed, they move around less.

WR-3 is programmed with three different behaviors: “chasing,” “continuous attack” and “interactive attack.” Each one was designed to induce a different level of stress in rats. Chasing stresses the rats out, while the attacks create an environment of pain and fear. In the interactive attack, the rat is only attacked if it moves, while the continuous attack means it’s constantly under fire.

Researchers set WR-3 loose on two groups of 12 young rats once a day for five days in continuous attack mode. A few weeks later when the rats had matured, their movements were studied in an open field and while the robot chased it. Then, rats in group A were re-exposed to continuous attacks, while group B was exposed to the interactive attack.

The intermittent, interactive form of attack proved to be the most stressful. It was most effective in creating a deep depression in a mature rat that had been harassed during development. Before the robotic method can be used in drug screening, researchers will need to verify how well the test model predicts performance in the human condition.