LSD literally gets stuck inside your brain 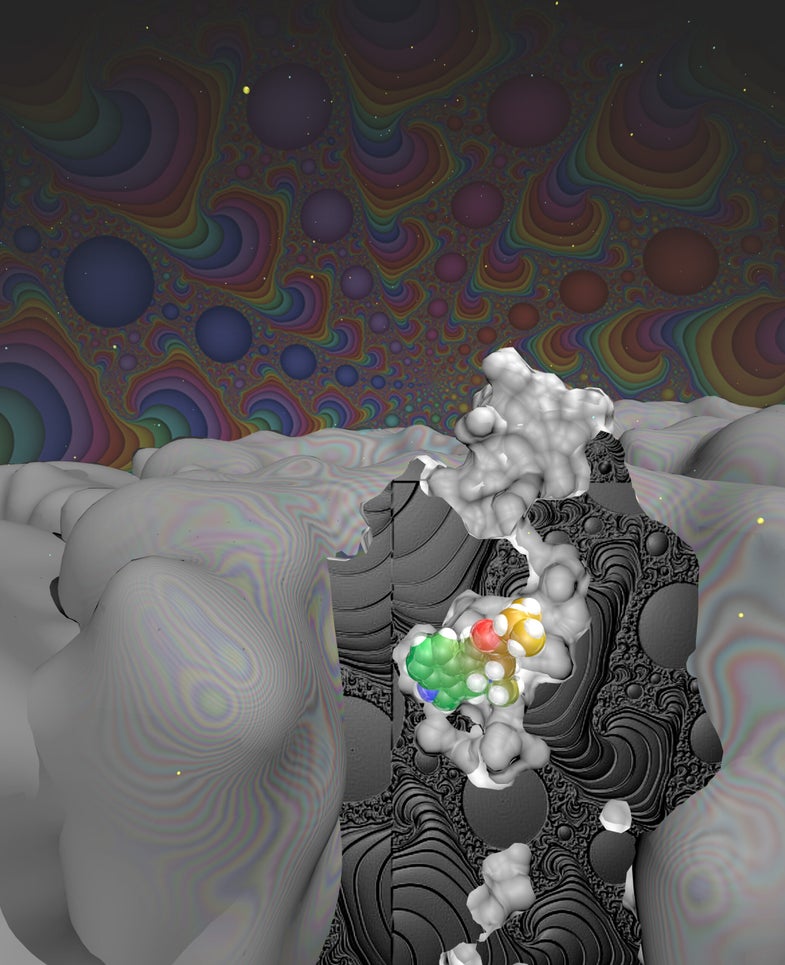 LSD’s hallucinogenic effects last an unusually long amount of time; 12 to 18 hours, to be precise. That’s no surprise to scientists—or to anyone who’s taken the drug. This duration, which is longer than any other hallucinogen, has puzzled scientists ever since they began intensely researching the drug in the ’60s and ’70s. But in a new study out this week, scientists claim to have found the key mechanism behind this staying power: Once ingested, LSD travels into brain receptors where it gets stuck—literally stuck—within a side pocket. This new understanding, they say, could help them to develop new, longer-lasting drugs to treat a variety of psychological disorders.

When researchers first began studying LSD, something tripped them up: The half-life (the amount of time a drug can be found in someone’s blood) for LSD is only about a half hour to an hour long. But the hallucinogenic effects of the drug often continue for a full day, and sometimes even longer. Even long after the drug could be detected in a person’s body, they were still able to feel its effects.

To figure it out, scientists used special photographs—called crystallography images—that display how atoms are arranged within a molecule. They zeroed in on images of an LSD molecule inside a serotonin receptor (these receptors are found throughout the brain and body, and create hallucinogenic effects when they attach to LSD). The photos showed that when LSD binds to serotonin, it gets stuck within an inner pocket inside the receptor at such a strong angle that it basically can’t get out. Then the serotonin receptor’s protein structure folds over the LSD molecule, further trapping it in.

This explains some of the data regarding how potent the drug is, says Bryan Roth, one of the study’s authors and a pharmacology professor at the University of North Carolina at Chapel Hill.

He says the binding technique is likely unique to LSD, as other hallucinogens like psilocybin and DMT (N,N-Dimethyltryptamine) have much shorter effects on the body. Roth and his team plan to use this new knowledge to potentially create novel drugs to treat depression, schizophrenia, and other psychiatric disorders. Drugs used to treat these disorders also work by interacting with serotonin receptors. The idea would be to formulate a drug that gets trapped inside receptors in a similar fashion without causing the same hallucinogenic effects.

This binding effect could also be common to other receptors, too, opening up the possibility for drugs that target things other than serotonin. Further, “it may even be a way to give drugs at very low doses,” Rother says. If the molecules stay in the receptor and don’t leave, he says, then you may need far fewer of them to create the desired effect.

Roth says this new understanding of LSD may also help explain the apparent wonders of LSD “microdosing”—where people claim that even tiny, undetectable amounts of the drug provide a tangible effect, boosting creativity and relieving depression (although no evidence-based studies exist to back this up yet). When Roth and his team exposed cells in a petri dish to tiny amounts of LSD, the serotonin receptors’ signaling was altered, meaning that some change was occurring. The researchers plan to further study this effect and what it means.

Roth and his team are targeting multiple receptors to try to develop drugs with this new knowledge, but they’re focusing on schizophrenia first. They say these new therapies could start going through initial testing in the next year or two.