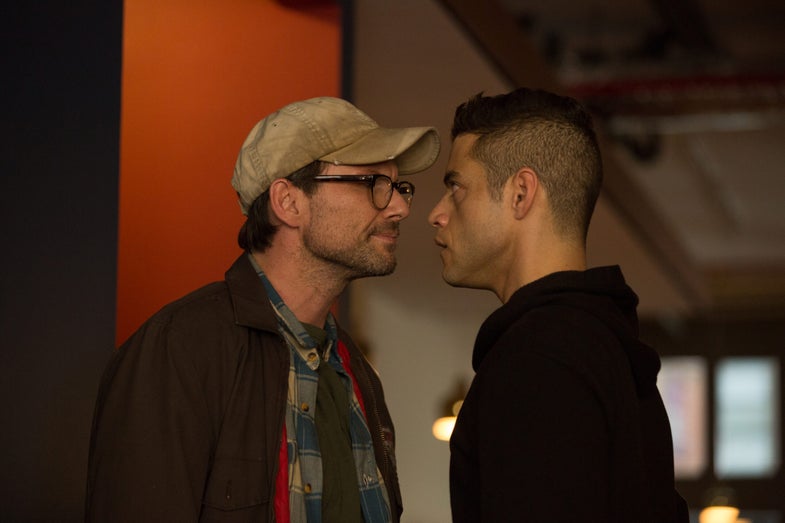 The surprise television hit of the summer, and arguably of the year, is USA Network’s Mr. Robot, a drama that blends hacking and technology into an intricate and continuously twisting plot. The main character is Elliot Alderson (played by Rami Malek), a cybercrime expert by day, hacker by night, who leads a collective, named “FSociety,” determined to fell the world’s largest corporation and ensure financial equality for all. Mild spoilers are to follow, so if you’re not entirely caught up, stop reading now.

Elliot is one of the more complex characters to grace primetime during this golden age. He views himself as a kind of vigilante superhero, yet his actions – regardless of their intent – often cause extreme distress for others. He wants to be in control, yet he is addicted to morphine and Suboxone (the latter often used to treat opioid addictions). And he suffers from various mental illnesses, rendering him unreliable to both the audience and himself.

The hotly anticipated finale of season one aired last night – it has already been renewed for a second season – and we spoke with the show’s creator Sam Esmail about how he researched and crafted Elliot’s character and the personal life experiences he drew upon, including his own struggles with mental illness and drug use.

Popular Science: There have been studies that link people will mental illnesses to alcohol or drug abuse. Were you cognizant of this when you were creating Elliot?

Sam Esmail: Yes, absolutely. Mental illness is such a sensitive topic in general, but they tend to try and manage their emotional distress through either self medication, closing people off, or creating a persona to sort of hide it. I found, because I actually suffered from social anxiety as well as compulsive disorder, that the biggest thing is hiding it. And finding ways to hide it, which sometimes does include addiction and self medication.

With you suffering from social anxiety, did that constitute the research you underwent to form Elliot?

Oh no, we also had a psychologist as a consultant on the show. I did have friends who have suffered from schizophrenia and mild dissociative identity disorder, as well as more extreme cases of social anxiety disorder. I pulled anecdotally from that, but I also wanted to concretize it with more research by our psychologist.

When you worked with the psychologist, what was the feedback like? Constructive? Or was she generally in agreement?

It was odd. It was one of those things where … she was so excited. For example, there is a certain thing I did in the pilot, and other scripts she had read that she pointed out. It was a subconscious thing, when he starts referring to us as “we should have stopped this,” but you know his imaginary friend he created, he starts saying “we” as opposed to “me.” And apparently that is something people suffering from dissociative identity disorder that’s the mentality they have. There is a group of them, a group of identities, and it is more of a collective that one singular person. And that is indicative again of that fragmented personality.

This all felt right to [when I created Elliot], and I don’t know if that is from my anecdotal … the people and friends I knew growing up. [The psychologist] reinforced the things that I did get right, and then there were things she pointed out that felt inaccurate. And there were certain things that haven’t been revealed to the audience yet that she helped me discover about this. I remember just me personally, nothing as extreme as what Elliot has, when you become aware of that, when you become aware of that, when you start to realize that maybe you have these issues that are serious and unmanageable, what is that experience like? Throughout this first season, she helped me build those blocks, and corrected when I got things wrong or fantastical and helped me ground them.

Was there a specific reason you chose morphine as Elliot’s drug?

Ultimately, what Elliot is doing is suppressing his pain. And that’s what a lot of people who have this deep depression, they try to manage that pain with painkillers, which is obviously what morphine is, or any of those popular opiates. I specifically picked morphine because I actually had personal experience with that, and I felt I knew that world – if you want to call it a world – really well. I felt I could represent that more authentically than other forms of opiates.

Elliot’s break from reality, and creating this unreliable narrator and seeing visions, or hallucinations, is that a by product of his mental illness? Or his drug use? Or is it a combination of both? I think it would be a combination of both. That’s not very specific to dissociative identity disorder. That’s more paranoia, and another reason why people were misled to think Elliot was suffering from schizophrenia, that’s another sign of schizophrenia. Though with schizophrenia, it is more auditory hallucinations, and not visual. There were definitely times, and again anecdotally, they thought people were watching them. The guy across the street from us and tapping his foot, and putting his cigarette out at a certain place, that was him marking a territory. I would be hearing this stuff, and in a weird way, I would start to get paranoid. What if he is right? It is a slippery slope. So I used that in concert with drug addiction, where your judgment is totally impaired, and you start being a lot more susceptible to a lot of things.

Was Elliot’s medical chart an Easter egg, because schizophrenia was never listed yet the audience kept assuming he was schizophrenia?

Editor’s note: If you’re struggling with addiction or seeking help for someone else, the Substance Abuse and Mental Health Administration offers a free list of services and resources online and a phone hotline at 1-800-662-HELP (4357)