Science Confirms The Obvious: Men And Women Aren’t That Different

A new psychology study brings "men are from Mars" gender stereotypes down to earth. 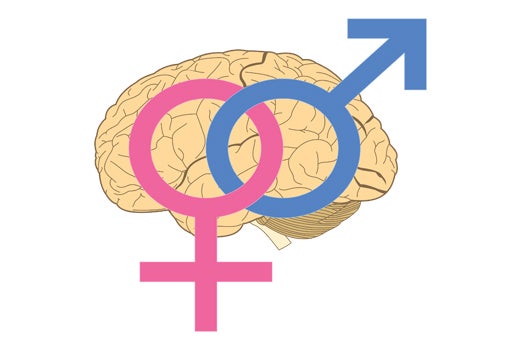 We tend to think of the two sexes as a dichotomy. The most important question asked of new parents is “Boy or girl?” But as any tomboy could tell you, that doesn’t always mean much. A new review of 13 past studies that showed significant differences has found that many of those differences are far less pronounced than the earlier studies implied.

The “Big Five” personality traits of psychology — openness, conscientiousness, extraversion, agreeableness and neuroticism — do not categorically vary between men and women. Contrary to stereotypes, women were not found to be significantly more intimate in their relationships, and science inclination did not overwhelmingly favor men. And masculinity and femininity, the study found, “are not all-or-nothing traits…they are truly a continuum.”

“Sex is not nearly as confining a category as stereotypes and even some academic studies would have us believe,” according to lead author Bobbi Carothers. The study, published in the Journal of Personality and Social Psychology, was part of her doctoral dissertation in social psychology at University of Rochester.

Physically, men and women did fall into very distinct categories in categories like height and waist-to-hip ratio. But psychologically, not so much. Men and women consistently overlapped in attitudes and traits like empathy, fear of success and mate selection, indicating that sex differences are not categorical, but more a matter of degree.

Carothers and Harry Reis, a psychology professor, reanalyzed data from 13 studies that had shown significant differences in the sexes, as well as collecting their own data on psychological indicators. They used three different statistical procedures to look for evidence that certain attributes could reliably identify someone as male or female. 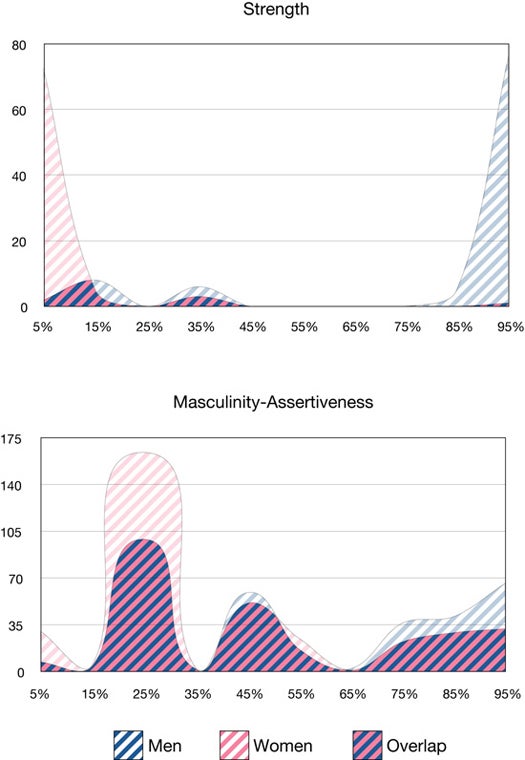 Physical strength between men and women using data from the National Collegiate Athletic Association’s long jump, high jump, and javelin throw competitions shows distinct differences between the sexes. Assertiveness as based on self-reported measures of competitiveness, decisiveness, sense of superiority, persistence, confidence, and the ability to stand up under pressure does not show the same gender gap.

For 122 different characteristics, from empathy to sexuality to science inclination to extroversion, a statistical analysis of 13,301 individuals did not reveal any distinct differences between men and women.

Gender can be a predictor for stereotypic activities like scrapbooking or boxing, but men and women don’t think about their relationships in “qualitatively different” ways, no matter what self-help books like Men Are From Mars, Women Are From Venus may claim.

While there are average differences between the sexes, they aren’t consistent enough to accurately characterize the entire group. Just because a man or woman fits into one stereotype for their gender doesn’t mean they will fit into another.

“The possession of traits associated with gender is not as simple as ‘this or that'” the authors write.

The study was based on questionnaires, and the authors admit that the results may not encapsulate real-life actions completely, as people don’t always self-report accurately. They leave the door open for research that establishes a gender through interpersonal behavior. But dividing men and women into neatly separated, simplistic categories could be harmful for heterosexual relationships, Reis says.

“When something goes wrong between partners, people often blame the other partner’s gender immediately,” he explains. “Having gender stereotypes hinders people from looking at their partner as an individual.”

Being of the opposite sex isn’t what makes it seem like your partner is from another planet. “It’s not so much sex, but human character that causes difficulties,” Reis says. It’s not you, it’s me.